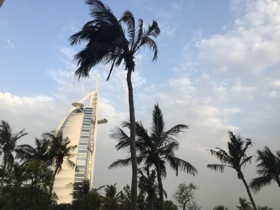 Looking up at ‘The Burj’

Burj Al Arab might be the most easily recognisable hotel in the world but it is also a luxury hotel that makes you feel better for staying there. The gal always gets a thrill approaching the place – it soars up to 1,053 feet, a sail shape with a spire on top. In this are fitted 28 floors but they are all double height, so think of it as a 56-floor masterpiece, conceived by W.S. Atkins and Tom Wright, and interiors by Khuan Chew, a musician who made her name in the design world with her brilliant use of colours. 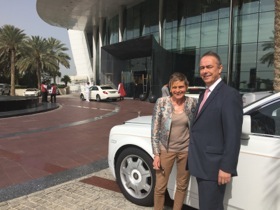 The hotel opened in 1999, and it had some significant early GMs, of the calibre of Philippe Charraudeau and Wolfgang Nitschke. Now it is in the tender loving hands of another great leader, Tony McHale, who started January 11th, 2015. He heads a team of 1,300 and admits it is a 24/7 job making sure that everything is polished and maintained 100 percent. The most luxurious hotel in the world cannot have the slightest nick or tear. The Rolls Phantom is, of course, pristine, despite a recent dust storm. 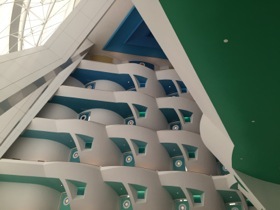 Look up, at the open-atrium interior

Go in through the main glass doors and you are offered rose-scented towels, and Arabic coffee. You are taken up one of two escalators that straddle a two-floor high diagonally-set water ballet: to your left is an aquarium, with over 1,500 fish (the other side of the fish bowl is Al Mahara resstaurant, when you kind-a dine off turbot while looking straight at a shark swimming a couple of feet away). As you soar upwards, look even higher. The 202 rooms, all duplex suites, are set off V-shaped open-sided corridors in the atrium, open to the roof. 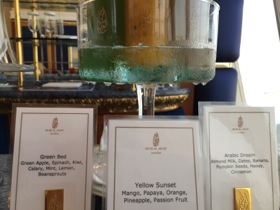 Part of my welcome were named smoothies

Some suites are bold to the state of near, but not quite, garish, but 2007 is a delight, bright and light, with stunning views down through the total height all-wall windows. I had blues, and creams, and leather, and a painted classical scene above the tub, next to Hermès toiletries (and downstairs my games room had a full-size billiards table). I had lemon and olive oil madeleines on a gold-rimmed Bauscher-for-the-hotel plate under a big glass cloche, and bowls of fresh berries, and home-made smoothies, and a big crystal jug of water with a stirrer that held a rose-coloured quartz. This, apparently, is VitaJuwel harmony, designed to maintain body and soul in balance for health and vitality. I was feeling pretty good already. Staying here is good for the health, particularly if you try a bottle of its own-label Cabernet Sauvignon, vintage 2013 from Chile’s Colchagua Valley. 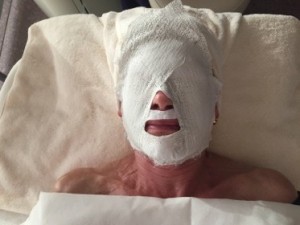 Is she still breathing?

This is a luxury hotel that has two gyms, one facing the sunrise and one the sunset. It also has a spa that offers usual potions and lotions, but also QMS Medi Cosmetics, from Germany. The signature Burj Pearl Touch Experience was launched only this February so of course I had to try it. Bianca Hoffmann, from Cape Town, has absolutely perfect skin and I wanted to look like her. Well, just under two hours later she had extracted  and polished and puffed and goodness only knows what else, and for some time I was more or less encased, as shown, in good old plaster of Paris (all in the cause of duty, you know, dear reader). I was told this would combat the loss of collagen and restore elasticity. I can honestly say that after all this I felt like a million dollars, but how much of it was QMS or VitaJuwel or just being in the world’s most glamorous hotel it is honestly a little difficult to say.