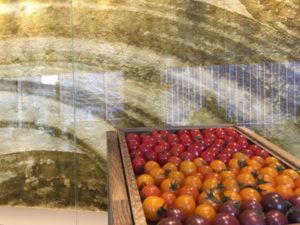 Tomato still-life, in front of a framed carpet

Life is full of surprises. What the gal had expected to be a most enjoyable lunch at the luxury Four Seasons Hotel Tokyo at Marunouchi turned out to be a culinary masterpiece in a divine airy ambience paired with an education in Japanese female life. There must have been at least 120 adults in the hotel’s seventh-floor Motif Bar and Grill, which seats 135 maximum. Of that number, all but two were Japanese, and of those only two were male. There were, however, at least five babies or toddlers, all in Recaro or other branded buggies. Yes this was, as it is every day here, ladies-who-lunch time. Hotel GM Takuya Kishi, a sociology graduate whose wife is a homemaker for their five year old son, explained. I heard later, elsewhere, that many Japanese men simply do not want their wives to work. 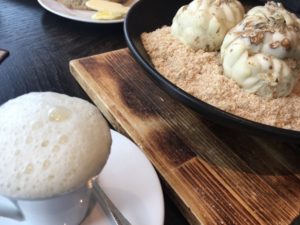 Japanese women legally get maternity leave of six weeks before a birth and eight weeks after, during which they get around 67% of their base salary, paid by social insurance. If they wish, either parent can then opt for a further year off, for what is called child care, again covered to the same amount by social insurance. After that, what then? There is a dire shortage of nursery schools in Tokyo, where land prices are astronomical, so some mothers simply have to stay home – or do lunch, which is probably less expensive than heading for Christian Dior or a department store. If they are smart they and their friends will choose Motif, the two year-old light and bright reincarnation of what had hitherto been rather a dark space on the hotel’s top, seventh, floor. 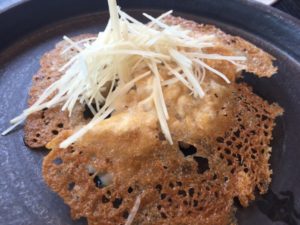 This hotel is owned by Hong Kong gourmet Richard Li, son of Li Kai-shing. and it was obviously essential that the new look be conducive and complementary to food that is overseen by Sapporo restaurateur Hiroshi Nakamichi. Designer André Fu has put in wood floors, taupe colouring, two big wall panels of pale grey ceramic shapes that look like sheets from an old book half turned into historic tiles: next to these hangs a swirl-design carpet in shades of soft buttercup. Most of the colour, however, comes from the food. At lunch, the appetizer and dessert buffets are meticulously labelled – see the photo at the top. A server then brought us entre-acte cups of stewed lotus root topped with yuzu foam (and some lotus roots, to show what they look like). And then you choose your main course from a list that is short but exceedingly well-chosen. 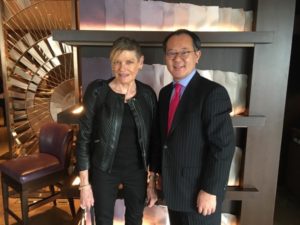 Kishi-san had a chicken roll and reminded me that two years ago, when we dined just before the opening of Motif, I chose a burger. Today, being brave for once, I opted for soft roe with a crust, and ginger. I was brought up that soft roe is served on toast but honestly, this presentation, by hotel chef Asano Hiroyuki, is elegantly tasty – the ginger is the strands atop the whole creation. Looking around, the 116 local ladies were all enjoying desserts, obviously de rigueur if you choose this luxury hotel for your lunchtime get-together. At about 1.55 p.m, by the way, they emptied the room, and pretty quickly. At two o’clock, on the dot, a server started clearing what was left of the buffet, and by five past that hour there was, Cinderella-like, no sign it had ever existed.