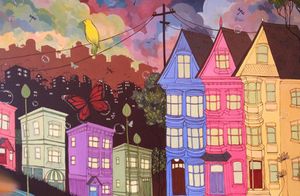 The gal knows exactly where she is just by looking at this amazing painting, part of a triptych installed November 2013 as part of the upgrading of Grand Hyatt San Francisco. Partly thanks to its art, this is now truly a luxury hotel.  The owners, Hyatt, have invested the proverbial ‘millions’ in art by seven new-wave San Francisco-based artists, all chosen by Olivia Ongpin, of nearby Luna Rienne Gallery.  This piece is actually one of three, 48 by 216 inches total, acrylic on wood, set side by side on a wall up on the hotel’s top (36th) floor. They are by Ursula Young, a 40-year old English woman who graduated from New York’s Parsons School of Design in 1966, and moved straight here, to California. 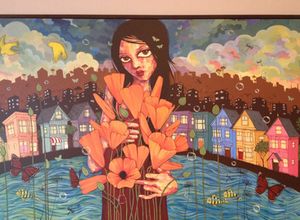 As the centre of the triptych shows, she specialises in urban fairytale images of San Francisco’s street culture and fashion.  How appropriate to hang her work here.  When the hotel opened, as Hyatt on Union Square, back in 1973, this top floor was a signature restaurant.  Those were the days, of red plush and flambées and crêpes Suzette and endless lunchtime cocktails.  Now this entire top floor space is a flow-through, around all four sides, of meeting rooms or venue(s) for weddings, big (or small).  This hotel is sensibly very good on meetings, by the way.  The lovely GM, Mike Jokovich, who had to buy a complete new wardrobe when he arrived from Hawaii mid-2013, says there are also three subterranean floors for meetings and they can even take cars down there for launches. 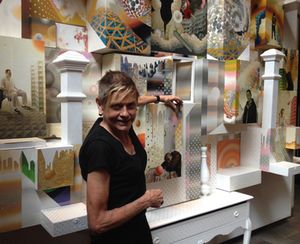 I think my favourite of all the seven art works that Olivia Ongpin has chosen is this white ‘indescribable’ in the lobby.  The lobby I can paint-in-words.  It is big, and busy, two floors high with most of the upper floor taken up by OneUp, a drawn-out eight shape, with narrow connector, between a not surprisingly chock-full casual restaurant with open kitchen and, the other end, past wine displays and look-outs down into the main lobby, is a sports bar that can be restaurant overflow.  Down in the main lobby there are two residential lounging areas, both with really big gas-fuelled log-look fires.  At one end of this giant lobby space is this white creation, 24 ft tall by 14 ft across, by David Choong Lee, He moved from his native Seoul in 1993, aged 27, and was fascinated by San Francisco’s Tenderloin-area homeless. 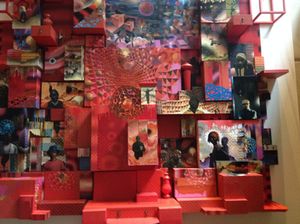 The same-size Lee work the other end of the lobby is more aggressive, in bright red.  Both are formed of wood boxes, piled haphazardly, and completely painted in acrylic and oil. There is a head here, a building there.  Had I a home big enough I would love the white one – but, question, how on earth do you dust the horizontal surfaces?  Hotels, and airports, have to deal with such problems the whole time.  Think of Heathrow terminal five’s lightbulbs that can only be changed by abseilers (at least not-working Lasvit chandeliers in hotels around the world can be reprogrammed from that company’s headquarters, back in the Czech Republic). 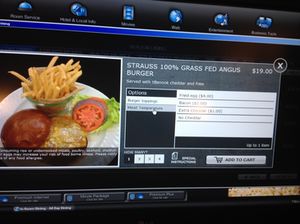 Which brings me to Grand Hyatt San Francisco and technology.  Hyatt has just signed to lease out an adjacent bit of land, which did have a massive Levi store, to become Apple’s flagship Apple Store, a giant glass box right here on Union Square. Will Apple technologically log in to the hotel?  Watch this space. Already, regular guests can check in by remote, ahead of time, and, told electronically their room number, go straight to that room (if they are clever, one that has access to the lovely 32nd floor Grand Club Lounge).  Already, too, they can pre-order room service, from wherever, using an app that allows them to state delivery time.  I, meanwhile, was less adventurous, though I did order my late-arrival dinner from the LG television in east-facing corner room 3111.  The screen showed me how the dish would look, asked me how I wanted the beef done, what else I would like put in the basket, and allowed me to state delivery time. 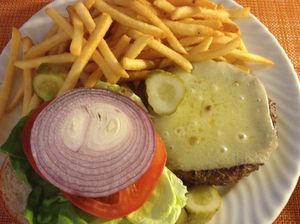 .. and the resulting plate

In fact what arrived was even more generous than the on-screen tempter, which had fries in a little container.  My fries liberally covered my plate.  I had two new Heinz jars of tomato ketchup, one of mustard, one of mayo, I also had iced water, not requested.  It was all rather fun.  In the morning, I thought, I might try ordering up one of the regional-specialty breakfast dishes, say San Francisco Joe’s special scramble, with ground beef, spinach and onion – I could then have texted to have my rental car pulled back up out of valet parking.  But I did not really want any more ground moo-cow, and in the event, anyway, after working out in the 35th-floor 24/7 gym, I had outstanding coffee – some of the best I remember – and good à la carte (though there is a healthy breakfast buffet) at a breakfast meeting in OneUp, and a car was waiting to whisk me away from this artistic and tech-savvy luxury hotel.