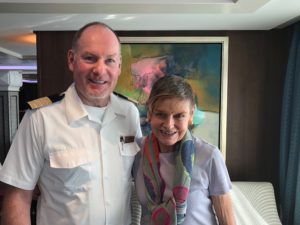 So farewell to Seven Seas Navigator – for now. What an amazing ship, kept spick and span by General Manager Michael Coghlan and his team, this is. It started life as a proposed Russian scientific flagship and went through an Italian and American rebirth to become international, owned by Norwegians? Navigator was launched August 1991 in Admiralty Ship Yard in Leningrad. Then called Akademik Nikolay Pilyugin, she was intended to be a research vessel, but with the collapse of the Soviet Union her future changed tack. 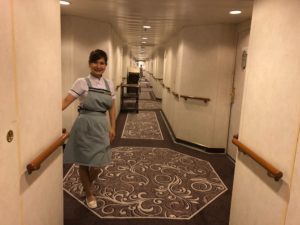 She was, therefore, sold before completion, renamed Blue Seas and taken to Mariotti shipyard in Genoa, to be extended and enhanced.  In October 1999 she was christened, in Fort Lauderdale, by her godmother, Marilyn Carlson Nelson, then boss of the mighty Carlson empire. Today she is 560 feet long, 81 feet wide, and rises 128 feet above sea level. She is powered by four Wartsila 8-cylinder 8L38 engines driving two Wartsila variable pitch 4-blade propellers. She has 13 decks, and 245 suites – room maids work in trios with butlers and bathroom-cleaning room boys and such teams do a staggering 16 suites, day and evening. 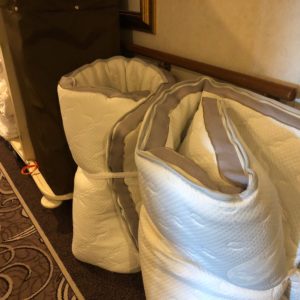 Matermoll mattress tops ready to be installed for the next passengers

The turnaround is particularly demanding. Guests on a cruise have to have checked baggage outside their doors before 11 p.m. the night before disembarkation, and during the night those elephantine suitcases are silently taken down to the fourth deck. On the day itself, you must vacate your suite by 8 a.m, which is not a bad thing as specific timing means little opportunity for feeling sad, or emotional. Over a period of two weeks we have made many really good friends and got to know some of the staff well. There was one other passenger walking the deck with me as we nosed into our Los Angeles Port berth and, miracle of miracles, there was still plenty of Chobani yoghurt, and fresh mango and strawberries (I shall never forget a Royal Viking cruise which had run out of anything fresh that last morning). No, here it was quality as usual. 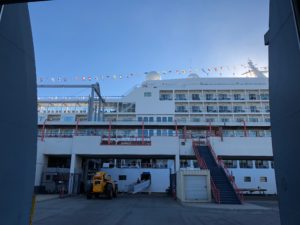 Looking back at the ship, from the dock

The mattress tops that I had had taken off our Matermoll mattress waited outside my suite, ready for me to vacate so butler Bejoy’s team could begin turning the suite around. At noon the next lot of cruise passengers would be boarding, for lunch and, in some cases, lots of Champagne before an announcement over the tannoy would say, about 2.15 p.m., that all suites are now ready (luxury hotels seldom have a complete check-out with complete check-in only three hours later). As for me, I had a last look back at the ship, loading up supplies, and I thought happily of all the memorable moments over the last two weeks. AND NOW SEE AN EMOTIONAL  ON-STAGE FAREWELL FROM STEPHANIE BALDWIN, WHO SANG ON OUR OUR CRUISE (BUT HERE SHE IS SHOWN ON ANOTHER CRUISE, SINGING WITH PHANTOM OF THE OPERA STAR DONALD CANT)