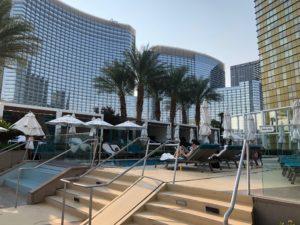 The pool is a Strip oasis

Unlike its near-neighbour Bellagio, which stays the same but gets better and better, Mandarin Oriental Las Vegas is changing its name!  This coming Wednesday, August 29th, at one minute past midnight, it becomes Waldorf Astoria Las Vegas.  But the facilities, including the lovely pool area, and the team, led by GM Donald Bowman, will not change – and as it evolves, it too will get better and better. That is the promise of owner Man Ho Lam, usually known as Ronnie Lam, the aesthete and real estate magnate who also owns what is now the Hilton Lake Las Vegas, formerly Ritz-Carlton Lake Las Vegas. The gal was thrilled to be able to see this splendid 11.5 year-old luxury hotel on the point of transition. 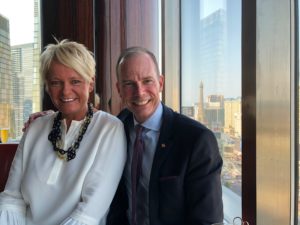 Of course all Donald Bowman’s pals came to town to spur him on to even greater things. We met up in the bar, to hear about his plans for his annual Virtuoso party for 115 top travel advlsors.  He did a progression dinner: one course including sitting at small tables, specially made with digital clocks in their tops – guests were served, with their steak, Moment In Time, a Cabernet that the Mandarin Oriental Las Vegas executive team had themselves blended, at Blackbirds Vineyards, on a bonding away-stay in Napa Valley (we particularly wanted a wine that had hints of Pomerol, says Donald Bowman). Every Bowman Bash during Virtuoso is a once-off, and you can be sure that will continue in 2019. 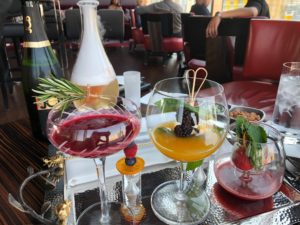 In my tiny room, 2111 – I jest, this is the mammoth Emperor Suite, see the video below – I too had a glass of wine to go with an imaginative welcome of duck confit with fig jam, berry coulis and crispy baguette.  To show how thoughtful as well as creative this place is, supplies included two long extension cords and four adaptors, and I appreciated a monogrammed bathrobe, and the really super Atelier Cologne toiletries, from Paris.  Then it was quickly up to the bar, leading off the 23rd floor lobby (which is supervised by the resident robot, see above).  In the bar, Donald Bowman said surprise us, and the mixologist certainly did. He seemed to know we needed a bit of colour at that hour. 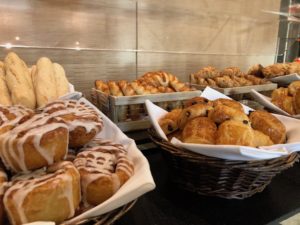 That became the kind of extended evening that is so typical of Las Vegas, but this is a 24/7 city – it also starts early. I was at MOzen Bistro shortly after its 6.30 opening and Kenneth, a real guy not a robot, recognised me, called me by name, knew what I liked from a year ago.  This is a clever breakfast concept, with a small and perfect buffet but such à la carte sets as a cold cuts special, ideal for European guests (they, like me, must smile at the salt and peppers, which are, no, not Peugeot mills but plausible whole eggs, brown shells, with holes on top indicating salt or pepper).  I was in and out, past the grab-n-go counter, in a very short time, but I later walked past, after another meeting, and at 9.15 a.m. there must have been 30 standing in line waiting outside MOzen for this luxury hotel’s breakfast product.  This popularity will only increase, I predict, after the transition to the wider world of the Hilton family. NOW SEE A VIDEO, FIRST OF MIXOLOGICAL MAGIC, THEN OF SUITE 2111