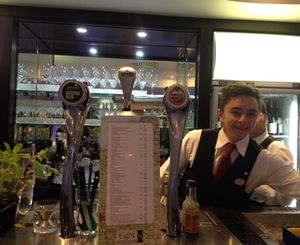 It is almost as if the gal is travelling from one Auckland bar to another but she begs a strong defence. She only tasted one tiny sip of the alcohol light beer with her diet lunch and now, at the lovely Langham Auckland, the bar is part of one of the world’s best buffet experiences.  At a sister luxury hotel, Langham Melbourne, the buffet is priced depending on the variety of its seafood.  Here, at Eight, called thus because of its eight cooking stations, the menu and price stay static, and incredibly good value the experience is too.   I am dining with two Aucklanders, Franz and Lena Mascarenhas, who met at hotel school in Mumbai.  They  have just returned home, here, after years in south-east Asia. 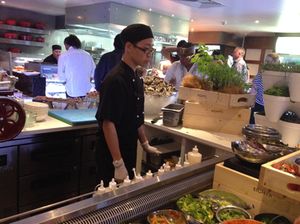 One of the food stations

We walk around exploring all the stations. The Indian section has large tandoor ovens, the woks are woking (sic) nonstop. Eager-beaver young chefs cook as fast as their hands and thoughts will allow. Unlike, say, other mega operations like Mezza9 in Grand Hyatt Singapore or the Flying Elephant in the Park Hyatt Chennai, they do not seem to be wired up to talk to each other, but they do not run out of supplies, or patience. The most frustrating thing for them must be some first-time diners who are wandering around not sure what to take, but fortunately at least a third of the diners are locals who come regularly. 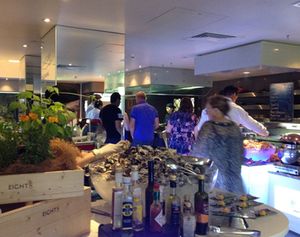 Diners walk around trying to choose

The 407-room hotel is choc-a-bloc, with people who have just got off cruise ships, and others waiting to board tomorrow. There is an Indian wedding in the Great Room, where most women are in saris but the occasional make-a-statement youngster wears a tight and short shift paired with nude Christian Louboutin shoes with six inch heels. Sometimes, when cruises come in and disgorge their passengers at eight in the morning, Franz Mascarenhas turns the Great Room into a hospitality area they can use until their bedrooms are ready.  I knew this hotel ten years ago, when it was Sheraton. Now, owned by Great Eagle and part of the Langham group, oodles of money has been spent, and it looks as cheerful and welcoming as any 2014 youngster. 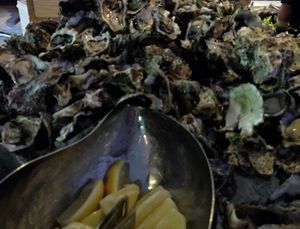 As in Melbourne, I had been welcomed by a young lady in pink suit, but this one came from Tianjin and spoke perfect English.  We passed the pale-pink Flavours of Langham boutique as she took me up to 379, a Park Suite, which had the brand-standard pale pink compendia, and a jolly good pen, and pink-edged paper, but the rest of the colouring was soft sage.  I looked out over the greenery of the city, and later walked across Symonds Street – do not jay-walk here, use the pedestrian lights – to Grafton Bridge and the historic adjacent public toilets, both 1910 vintage. 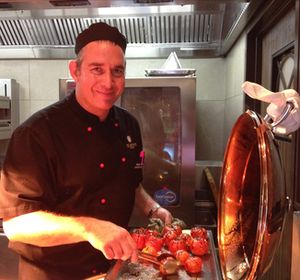 .. chef Darby Brooks has everything…

There is a cemetery behind, a history book of Auckland in the late 19th century, with a sobering number of babies listed. But now it is dinner time, and chef Darby Brooks comes over to help continue with the selection of the meal.  After Pacific oysters with lemon, I go on to a made-it-myself salad, with lots of truffle oil.  Next I have chosen wok-fried fish, from a selection that would do justice to any good fish counter in, say, David Jones or Harrods.  One of the most popular desserts is make-it-yourself lollipops, or sticking fruit skewers into the chocolate fountain. Cleverly, there is also a Mövenpick counter, for those who want their icecream fix. 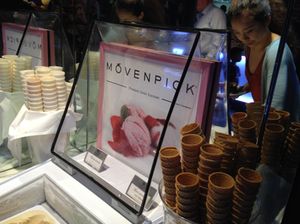 Dinner time leads to bed time as I have to get up at three. The wake-up call is exact, there is an alert manager as well as my driver waiting, for the 3.30 departure for the airport.  As I leave this friendly luxury hotel, I am reminded yet again what a lovely life I have.