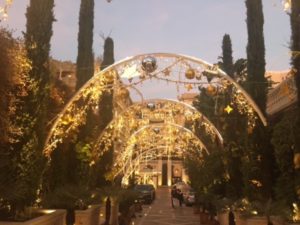 Looking along to the Metropole entrance

Monte-Carlo is fantasy land at any time of year (is this place REAL?)? It is particularly fantastic at the end of the year and the ultimate fairytale luxury place is Hotel Metropole Monte-Carlo. See its gorgeous approach, to the left. As night falls, during the festive season shoots of light soar over the arches, like meteors. As the hotel’s passionate GM, Serge Ethuin, says, Christmas and New Year have always been magic to him and the gal can see what he means. The decorations both outside and inside the hotel, even in the Jacques Garcia lobby, take your breath away. 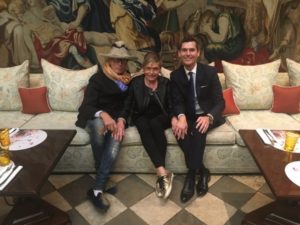 It was here, in the lobby, that I met up with an old friend, David Shilling. Even when he was at St Paul’s School back in London he achieved fame for making outrageous, sensational, absolutely enormous hats for his mother, Mrs Gertrude Shilling, to wear at Ascot. It was David who created the fantasy hats that got larger and larger until they boomeranged back to reality, to be replaced by the fascinators that many ladies wear, to horse-races and weddings. David has moved on, both geographically here, to Monte-Carlo, and creatively. He is now composing and performing original electronic music gigs – but note, here in the photo, he is wearing his own-design hat, coat and shoes. 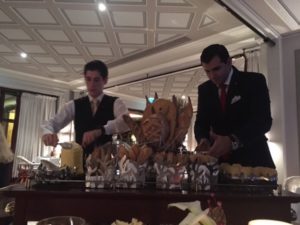 The bread trolley, with butter tower

I loved suite 509, looking out to sea. Jacques Garcia, who so often goes dark, has, in this 126-room hotel, controlled his usual shades in favour of light-bright-and-sunshine. See the video below to explore the suite. After a day of checking out the three floors of designer shopping beneath the hotel (and if I say designer in this ultra destination, you can be sure even the casual to-go kiosk is Ladurée), and climbing hundreds of steps up to Beau Soleil, it was time for dinner. We had a choice: two Michelin stars at Joël Robuchon or one at YOSHI, also Robuchon, but doing Asian. That was over-booked and I was thrilled to be back at Robuchon doing French. Even the plate setting is a work of art, with gold-threaded ribbon tying a rolled napkin, and the bread trolley is a ballet, with two spoons used to scoop Bordier butter into a rounded shape. 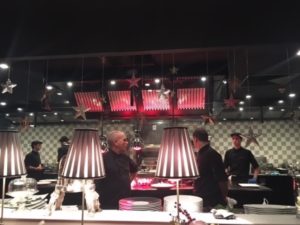 Robuchon followers in the open kitchen

A luxury hotel of this calibre is going to produce some of the best-ever amuses, and here they were a foie gras emulsion, plus wafer slices of Iberico ham, and a tomato bruschetta. Then came my beetroot starter (at the top of the page) – with avocado, apple, and green mustard sorbet atop. I also had another tiny starter, sardines with Menton lemon confit, and my main course, grilled sole, of course had Robuchon’s famous mashed potatoes, in a tiny china pot. We drank a Dme Tempier Bandol 2012, and finished with bits of chestnut topped with Menton lemon foam. I was really impressed by the menus, which offer one all-gluten free as well as discovery, and seasonal, choices. The show kitchen, led by long-time Robuchon disciple Christophe Cussac, work like a well-rehearsed orchestra, as colleagues were to do in the morning, at breakfast (earlier, the hotel had opened the gym specially early, without my asking – thank you everyone – and after breakfast I headed for the spa, which switches to Givenchy in April, and I am among the many who cannot wait to come back). AND NOW TOUR MY SUITE, BELOW