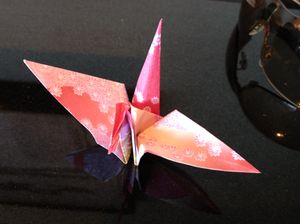 Yes, The Peninsula Tokyo is a fantastic luxury hotel. Order a Caesar salad in room service and first of all it comes with complimentary Evian, and the salad has two big tranches of heavily smoked real, old-fashioned bacon.  It also comes with a dinky little paper bird, origami at its best. There are similar birds scattered around my room, and, down in the lobby, nestled around the Lying Dragon Gate bamboo sculpture that is one of over a thousand artworks around 314-room hotel. Let us think, says the gal, of some of the other extras when you stay here. A room comes with a telescope, on a tripod, to see down to the Imperial Palace better. 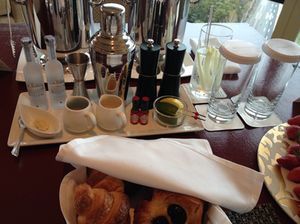 Make your own Bloody Mary, with a view of the Imperial Palace

To go with the Caesar, order up a make-your-own Bloody Mary set, with miniature bottles of Belvedere vodka, and tomato juice on ice, and lemon and cucumber slices, and salt. Is it true that this is where the Rolling Stones stayed February 2014 for their three sell-out concerts in the 50,000-seat Tokyo Dome, and did they order Bloody Mary kits too? With their retinues, they took, apparently, 60 of the hotel’s rooms, including all the suites, and they loved the stay because of the views, the service, and the privacy. Yes, you can avoid passing through the always-packed lobby lounge, if you are famous, by entering via the underground carpark. 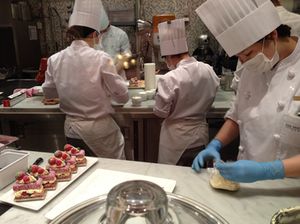 Watch the pastry cooks, for hours on end…

But as always I do not envy the really famous, in hotels.  They often miss the best parts.  Here at The Peninsula Tokyo, for instance, one of the most exciting as well as educational things is to go down to the basement, to have a snack at the compact but elegant bistro. Right next to it are two big windows, one either side of the marbled corridor. You look right in, to the two working pastry shops. I stand for as long as I have the time, watching the intricate work of masked chefs, in pristine whites, piping the tops of individual gateaux slices. Each piping is exactly like the others. Even a robot could not achieve better perfection.  This is better than watching any-old celebrity chef on television. 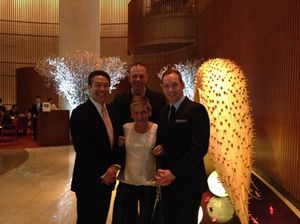 For ultimate fantasy, head for lunch or dinner in the hotel’s 24th floor Peter restaurant.  By day, the theatre is the view, through all-glass walls down to the Imperial Palace.  By night, Yabu Pushelberg’s interior is the set, with catwalks, and all-wall imposed scenes that evolve from an imperial palace in old St Petersburg to a woodland forest. Overhead is a network of Swarovski-type necklaces. Thanks to sponsor Veuve Clicquot, who have a bright orange Smeg fridge there to announce their presence, there is even live music. Choose American beef, in honour of the hotel’s marketing genius Mark Kobayashi, or Australian, in honour of two Sydneysiders, food director Kieron Hunt and chef Adam Mathis – or Japanese, because of the locale.  Whatever, do not miss the mouthwatering lightly-tempura avocado slices. 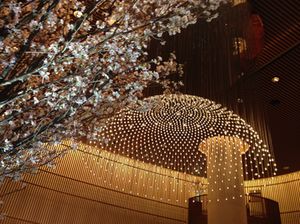 The ultimate fantasy of the lobby, with cherry blossom and minuscule overhead lights

And another ultimate fantasy is, simply the lobby of this luxury hotel. Perhaps having a Japanese interior designer helps, in this case Yukio Hashimoto, a guy who used to work with Super Potato. Soft horse chestnut and cedar woods are used for floors, wall panels and even woven ceiling inserts.  A cloche of thousands of tiny lights sparkles overhead and, right now, whole trees of living cherry trees signal that spring has come.