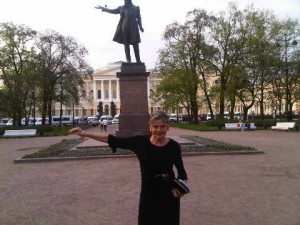 St Petersburg is a living testimony to so many great names of the past, including Moscow-born Alexander Pushkin, killed in 1837, aged 37, in his 30th duel (his French opponent had been trying to seduce Mrs Pushkin).

Room 112 of Grand Hotel Europe is themed for a local boy,  Carl Fabergé 1846-1920. Known as the Fabergé Suite – one of the luxury hotel’s several such ‘historic suites’, all of which come with butlers if you want them – it is pale and elegant, with light parquet floors set with oriental rugs, and palest pink and gold wallpaper.

There are two 15-inch high gold sculptures of Fabergé eggs in one cabinet, and a selection of suitable books in another.  A portrait of Fabergé graces one wall, near photos of his showroom. The gal learns something every day… 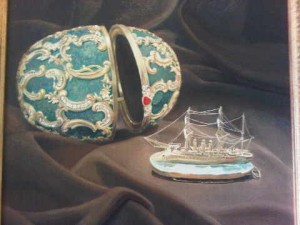 Orient-Express as a group loves the arts. La Samanna on St Martin has a resident artist, and another sibling hotel, La Residencia on Mallorca has not only a resident artist but a resident sculptor.  Many of its hotels have tutored art programmes.  Stay home, in the Fabergé Suite, and do a PhD on Fabergé.

Live off the fruit bowl and room service, and your private bar, hidden in a closet, offers not only espresso and a range of teas but there is a filled wine fridge as well as a minibar. Think back to who stayed here, at what is now a Leading hotel, in the past.

Tchaikovsky honeymooned here in 1877, although actually this is not a good recommendation for this luxury hotel (‘She is loathsome to me in every sense of this word’, he wrote to his brother about his wife, and the marriage broke up very quickly).  Johann Strauss stayed here.  Regulars today include minor European royalty and major Russian oligarchs. 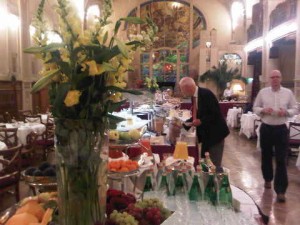 Last time here, I saw the same guy every day at breakfast. He was a skinny oligarch, big in gas (Gazprom is headquartered in St Petersburg).  His breakfast was monotonous.  A plate of watermelon, big glasses of beetroot juice, and of smetana sour cream.  Follow this with salad, then cheese.

Breakfast, in L’Europe from seven every morning, is one of the Seven Culinary Wonders of the World.  First, the room, the size of three double-width squash courts end to end. The ceiling soars up to architect Lidval’s Art Nouveau clear-storey stained glass. At the far end is more stained glass behind a stage where an unsmiling pianist plays, brilliantly.

Serving tables metaphorically groan under the array of juices, including beetroot, and a range of pouring yoghurts.  I have a bowl of strawberries, and a whole banana. A man near me goes for hard boiled egg halves topped with salmon roe, others choose Danish that look like fried eggs, sunny-side up (or have the real thing, bespoke from the egg chef). 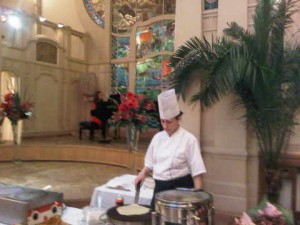 The bread table had dill-flavoured rolls, and bacon-studded rolls, and slice your own loaves that includes a pumpernickel, a  reminder of the black breads of times past. The coffee is at least as good as anything Starbuck’s could offer – it is blended and roasted here in St Petersburg, especially for this 301-room hotel.

Not so long ago there was another coffee awakening, at LUX* Belle Mare on Mauritius, the lifestyle luxury hotel that has turned its old front desk into a coffee station, and what was the back office, behind it, into a coffee roasting office, producing the most addictive aromas.  There is yesterday’s Financial Times to read (too early, for today’s), plus today’s satellited International Herald Tribune, and the amazingly outspoken St Petersburg Times.  Finish those, and on to looking through the hotel’s little check-in booklet.

Super-Oz GM, Leon Larkin, who wears a name tag so that everyone knows who he is, personally introduces the booklet, inviting you to love the hotel as much as he does.  The booklet not only gives details and opening hours of all the restaurants but also explains that the door keys show one of ten full-colour Palekh fairytales – Palekh is the type of miniature art found on lacquerwork and it is named for Palekh village in Ivanovo Oblast. 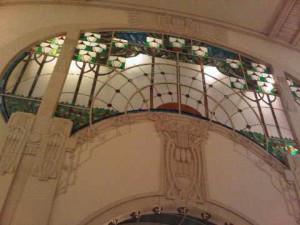 Looking up, to yet more stained glass, L'Europe breakfast room

At least half the breakfasters are locals (they know a good thing when they see it). Sunday brunch – the only one in town that works, says a knowledgeable gourmet – is nearly all locals.

Any day, for those staying overnight, they also appreciate lots of good things, like showers and free WiFi that are easy-work, and a really comfortable bed, and when you get into it at night you find not only the usual order form for tomorrow’s breakfast (how COULD anyone not go to the restaurant?) but also weather for the next five days, the opportunity to order a satellited New York Times or whatever, and a quotation, say Jean Paul Richter’s ‘the secret of contentment is the realization that life is a gift not a right’).

Having suggested I could do with more electric sockets, an antique-looking box has miraculously appeared, with European and US sockets within (who IS this genius who runs this place?). 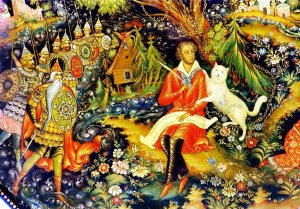 So, might as well make the most of that gift.  Soon I will be on the train to Moscow, which makes me think of trains.  Orient-Express is taking its famous Venice Simplon-Orient-Express (VSOE) for its first-ever journey to Stockholm near year.  The trip is April 8-14, 2013, Venice to Venice via Denmark and several countries in between.

There are overnights in Copenhagen both ways – sadly, Hotel d’Angleterre, currently being completely redone, will not be open in time. A quick home-made beetroot spaghetti with fresh vegetable bits for lunch, and I am on my way.  The girl behind the desk gives me a farewell phial, a spray of the hotel’s 1875-named room aroma.