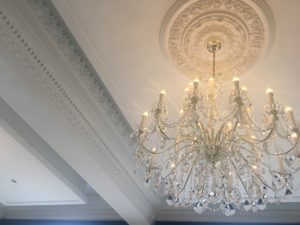 The newest luxury hotel in Washington DC is in one of the city’s older buildings, the 1899-vintage Old Post Office, on Pennsylvania Avenue. What is now the 263-room Trump International Hotel, The Old Post Office, Washington DC, had its official opening this very February, and from the start guests marvelled at its sheer awe-inspiring beauty. Outside, the historic clock tower dominates. Inside, the gal is riveted first by the nine-floor open atrium, seemingly held up by late-19th century Meccano. Go up to your floor, its corridor wide enough for two basketball players to lie across, head to foot, and enter your room where a glittering crystal chandelier hangs from the 17 foot-high ceiling. Corner suites, by the way, come with peripheral 270-degree sitting nooks, just right, as the video below shows, for romantic interludes. 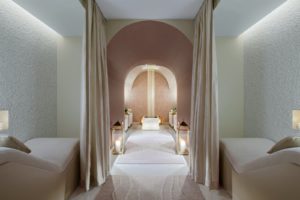 Inside champagne and royal blue-coloured corner suite 535 I found an envelope waiting on the bed – inside, on gold-embossed satin-feel paper, was a personal welcome letter from Eric Trump (stylish, said the friends to whom I showed this – apparently he will also come and talk with small groups of guests, if he is free, or he will make a welcome video). His sister Ivanka, currently not professionally involved with any of the hotels, had a hand in the design here: it must have been she who put its eclectic library, which included a 526-page American military manifest, ETA Catalogue 2017, and, by contrast, Jeffrey Robinson’s 1966 book, The Hotel: Upstairs, Downstairs in a Secret World, about a thinly-disguised Claridge’s. Ivanka had even more of a hand in the hotel’s lowest level wellness, the serene Spa by Ivanka Trump – I particularly love the Roman-feel relaxation room, to the right, here, and the Natura Bissé products. 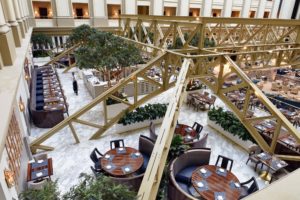 Looking down at BLT

The versatile David Burke does the one restaurant here, BLT Prime. It occupies a mezzanine terrace, allowing a marvellous view both to the lobby’s main floor sports bar, with a wall of bottles behind, and up the soaring atrium. I was with the hotel’s energetic GM, Mickael Damelincourt, who insists he is primarily a businessman (he learned many tricks from his mother, who ran a Paris antiques shop). After a tuna tartare on a base of avocado, and a cowboy USDA Prime 30-day dry-aged bone-in rib, and a glass of Streicker Bridgeland Block Syrah 2011 from Western Australia, there was sadly no room for David Burke’s signature cheesecake lollipop tree with bubblegum-whipped cream… In the morning, similarly, there was simply no space for the bestselling Clocktower Omelette (Virginia ham, white Cheddar, bell peppers, candied bacon, potatoes, toast – and, I presume, eggs). 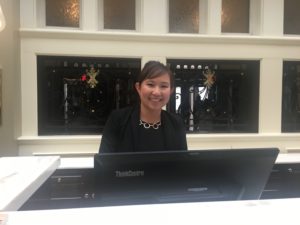 I had been met at the station, before arrival, by Chriselle Aquio, the head Attaché, customer service agent, who had followed Mickael Damelincourt from Toronto. She was at her desk as I left, and gave me her card, which was extremely fortuitous as half an hour after exiting this really stylish luxury hotel I realised I had left something vital behind. I called her mobile, and the errant item was with me in 20 minutes – oh what service. M Damelincourt had said how much he enjoys hiring and working with young people – he also mentors veterans – but he wants them to have a goal. Too many do not have the confidence and determination to be positive enough to succeed, he admits. The way he structures his industry-standard morning meetings, for instance, shows his direction: as well as going through current and coming guests, one participant recounts an experience he has set, say visiting a local mall and analyzing customer reaction. This is the kind of business leader the hotel industry needs so badly, and fortunately he wants to continue running hotels rather than heading into the obscurity of the two impersonal Cs, consultancy and corporate. NOW SEE TWO VIDEOS, FIRST THE LOBBY, THEN SUITE 535