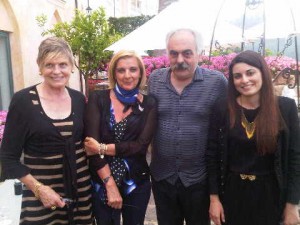 Mariella Avino, GM and co-owner of Palazzo Sasso, Ravello, with her parents

Back up in Ravello, a thousand feet above the Mediterranean, some of the Avino family were gathering. There was papa and mamma and the eldest – of three – daughters, Mariella. They, with their two younger daughters, own what is now Palazzo Sasso, another of the Amalfi Coast favourites of regulars to this part of Italy.   Many of these regulars, it seems, go from one luxury hotel to another, and back again (just like the gal). 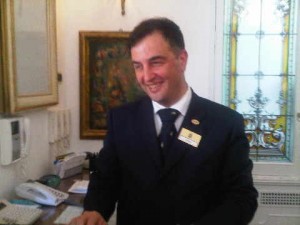 Antonio has been on hand since the Palazzo opened in 1997

When they return to the Palazzo they find the same people, here year after year, back on duty when the hotel opens on March 1st and still alert and charming when it closes on October 31st for its annual respite, and maintenance.  Antonio Ferrara, born in England, started here when the Palazzo opened in 1997.

He was a humble porter then, now he has risen to be in charge of front office, the conciergerie, and generally making everything work.  He is behind his small desk just inside the main door so he can see what is going on.  And he can survey the lobby of this palace. 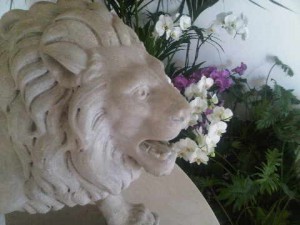 The Palazzo's elegant lobby has lion and orchids ...

Ah, lobbies. The International Herald Tribune had an article three days ago about computer-savvy younger travellers and how they use lobbies for both business and social gatherings.  Nearly all great hotels have great lobbies (the black sheep include Hotel Costes in Paris which intentionally has a lobby, albeit designed by the otherwise-marvellous Jacques Garcia, to make you feel insignificant and uncomfortable, and Trump International in New York has a lobby that is dominated by so many front-desk workers that you want to rush through and up to your room, which is the intention).

But think of great lobbies, the multi-level affair with water ballet at Burj at Arab, the chandeliers and light show that is Jumeirah Etihad Towers, the flowers in Mandarin Oriental Bangkok and the elegance with live music at The Peninsula in Shanghai…. Chinese hotels invariably have a pair of lions outside their main door.  Here, at the Palazzo, there is a splendid stone lion in the lobby itself.  He sits surrounded by orchids, surveying the scene. 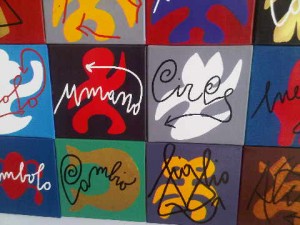 .. and art, including pieces by Marco Rotelli...

The lobby’s floor is an Escher-like pattern of green and cream marble squares set to give a three-dimensional box effect. White walls and columns rise to pointed arches, as if copied from Amalfi’s cathedral.  On the walls, here, hang various one-off modern art works that perhaps one would not choose for one’s own home but they look very splendid here.

Some of them are by Venetian artist Marco Rotelli for a Louis Vuitton collection, and a book on his work is set, deliberately casually to make you feel at home, among a selection of art tomes.  Today’s papers are similarly spread on the – closed – top of a grand piano. 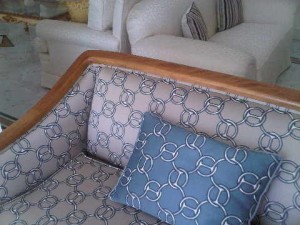 .. and fabrics by Hermes

The lobby of this Preferred hotel extends to give lots of indoor seating areas, many with views past Ravello’s Niemeyer concert hall to the blue sea so far below.  The fabrics are Hermès, which makes one wonder if little local kids are so well behaved they never put their dear little chocolate-goo-covered fingers on a chair cover.

A delicate table holds glass jars of what the Italians call confetti, what the English might call bon-bons.  Each jar is labelled. Choose coconut, croccante, hazelnut, lemon or pistachio, as many as you want…  There are orchids here, orchids there, and a good point is that you actually cannot hear others’ conversations from anywhere. 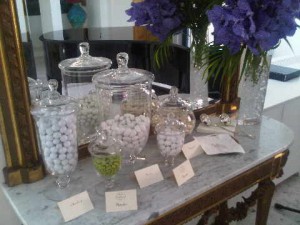 This is a very adult place, and lots of fun.  At the far end of the lobby is a proper bar, resting place for dozens of whiskies. A vitrine holds quite a few precious cigars. And this is not only a masculine environment.

We are here to talk with Mariella Avino, a business management graduate who worked in risk management at HSBC before coming home.  As well as being part-owner she is GM, even before her 28th birthday, which happens to be on the annual ‘feast’ day of Ravello’s favourite, Pantaleone Caruso, next month. 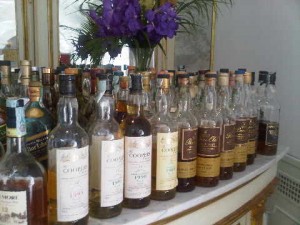 She is going to do something Big with the hotel, she says determinedly.  It is part of the family history.  In 1995 papa, who was running the family tomato-canning business, wanted a hotel as a hobby, and this is what he bought, the old Sasso that had been running for years as Palumbo.  Give it back its original name, put Palazzo on the front. Fine, well and more than good, but, Mariella Avino, what are you going to DO with your beautiful palace hotel to put it even more strongly on the map of top luxury hotels around the world?