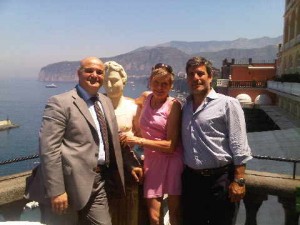 Family-owned luxury hotels are such a treat.  They invariably come with years, decades and sometimes centuries of passion poured into them.  Many of these one-offs are members of Leading, and they form an unofficial network, too, with such other one-off luxury hotels as, say, Nassauer Hof in Wiesbaden, and Gstaad Palace, in that select Swiss mountain destination.

Guido Fiorentino is a tax-refund lawyer, but whether that or hotel-keeping is his day job is, says the gal, a matter of conjecture. His fun face is being the fifth generation of Fiorentinos to run the beautiful Grand Hotel Excelsior Vittoria, Sorrento – which he does with the invaluable support of the equally charming Venetian General Manager, Nicolino Grigio. 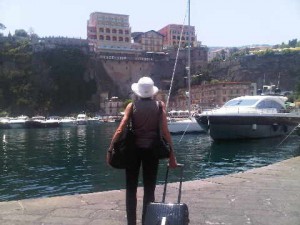 The Porsche Rimowa arrives in Sorrento (look far up to the hotel, on the skyline)

Arrive in Sorrento on a 25-minute jetfoil from Capri, or other jetfoils or ferries from Amalfi, Naples or Positano, and you see this stupendous sight.  There, across the harbour, is a 250-foot sheer cliff face with three buildings at the top – there were four, but one was demolished after a 1980 earthquake.  That space is now a massive garden.

Today, the football pitch that is part of the whole five-acre estate is being used for a match, a team of nine to 11 year old hotel guests playing a team of same-age locals, led by a sixth-generation Fiorentino.  After a lot of screaming and shouting, including from parents, the guests, in numbered shirts, win 14-13 and both teams then devour a lot of ice cream and cake. 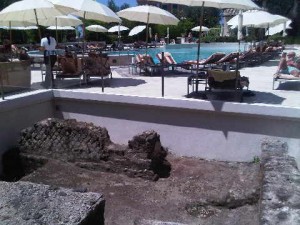 Roman ruins, in front - the 21st century pool, behind

Fortunately one of the earlier Fiorentino owners invested in an elevator that takes you directly from harbour level right to the hotel’s gorgeous terrace (from which, of course, the views down – and out to sea – are stupendous).  Without that elevator it would be an extreme hike up to the top.

Year-round, guests at this resort-in-a-city average well over four nights and in summer they can be here for weeks. Right behind the hotel, or rather 100 yards down a fragrant floral driveway, you are in Corso Italia, a busy shopping street with Italian leather and all the other things you must buy while in the Naples area.

Stay on-site and you have not only the gorgeous gardens but also a big pool with a built-in jetstream.  By it is a Roman ruin, saved by the authorities for posterity.  Not many hotels have such historic treasures. 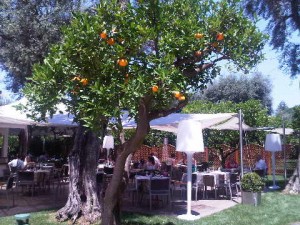 The ideal day could well include lunching, under awnings, at the poolside restaurant.  You are surrounded by hundreds of trees, many citrus, some bearing both oranges and lemons, grafted years ago. The antipasto buffet, in a covered temperature-controlled trolley, has marinated artichoke and mozzarella balls and more good things of life.

Fresh-made focaccia comes with tomato-flesh topping. Grilled seafood has only had to travel 250 feet up from its source. The olive oil on each table is Caporiva Olia Extra Vergine from the hotel’s own olive trees, here in the garden around you.

How clever of the Rispoli family, who later married into the Fiorentino family, to build what was then a weekend house – a retreat from Naples – here, back in 1834. 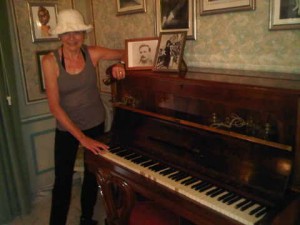 Caruso's piano in the Caruso Suite at the hotel

Many decades later Enrico Caruso stayed in a sea-facing suite that is still named for him (it is now, half its original size at 650 sq ft, numbered as 448).  I think of Pantoleone Caruso, whose annual date it is shortly.  Back to Enrico Caruso, born in nearby Naples in 1873.

In  1921 he composed Te voglio bene assai, How much I love you, here.  On August 2nd that year, not feeling well, he took to his bed in Naples and passed away, to sing beyond the pearly gates.

The Caruso Suite still has his favourite piano, and photographs and lots of other memorabilia. I determine to visit the Enrico Caruso Museum in Brooklyn, next visit to New York. 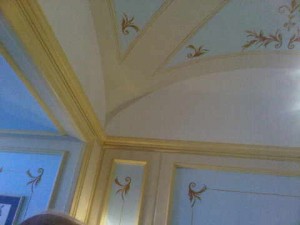 Many rooms have painted walls and ceilings

The hotel now has 140 rooms in its three buildings, and many of the regular guests know exactly which room they want. There are those who choose, for instance, the Pompeii Suite, where rooms have high walls evolving into barrel-vaulted ceilings, their plaster frescoed with copies from nearby Pompeii. Many of the rooms have delicate frescoes or painted or stencilled motives.

The original building, the 1834-vintage La Vittoria, is five floors, around a full-height oval staircase with wood-banister metal railings.  As you ascend or descend, you go past trompe l’oeil motifs of blue and grey marble-like classical scenes.  Set next to some of them are real, three-dimensional marble statues.

This is a hotel that just oozes Italy at you at every turn. Head down to the gym and you can work out – on a local (well, Italian) Technogym bit of equipment, perhaps in an alcove with a panorama of the Bay of Capri around all three walls. 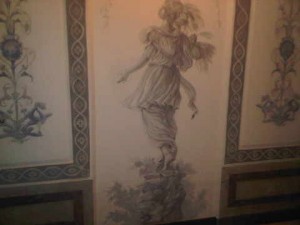 Interesting, with a nod to Italy’s membership of the EU, La Sperra, which describes itself as a boutique spa, offers an English product, Organic Pharmacy, supposedly a favourite of Kate Moss and Gwyneth Paltrow, and the French Le Cinq Mondes, as at Monte-Carlo Bay Hotel in Monte Carlo. 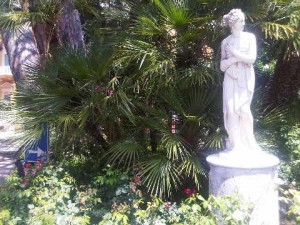 One of the many marble statues in the five-acre estate

When you leave, your car pulls into the turning circle and one of the many original statues is there to say goodbye. A hundred yards down that imposing, tree lined driveway, out into Piazza Tasso, left into Corso Italia and you are on your way.  If you are parents of one of those footballing guests, by the way, you have probably already been cajoled into making another reservation, this time next year, same room…