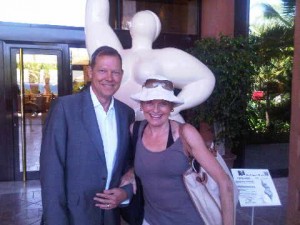 Travelling should be fun, whatever your age.  The story is told of a family of Middle Eastern origin who always stay at Kempinski Hotel Bahia Estepona but they felt they ought to be adventurous so they went to Barcelona, thought it boring, came back.

They next tried another luxury resort in the Marbella area and again thought it boring so they came back.  Kempinski Estepona, says the gal, IS fun.  Soon as you arrive you start smiling.  You are greeted by an sculpted female, not stone but a fibre-glass and resin construction.

It reminds me of the yellow dancing lady at another Leading hotel, the one-off Negresco in Nice.  There she twirls through 360 degrees.  Here she stays put, but you twirl, in through the doors of the 147-room hotel. 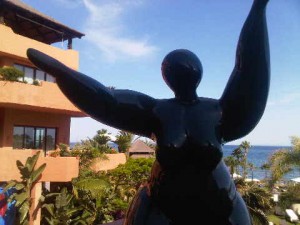 There are dancing women, and elephants, set all around the massive estate here, right on the beach at Estepona, 15 minutes’ drive west of Marbella.

The building of this  hotel is somewhat fort-like, as if building blocks, some with terraces, all in soft terracotta plaster have been dropped on each other, some at one angle at some at another.

There are hints of Morocco, not far south of here across the Med, and hints of a desert resort in Arabia somewhere.  At the lowest level, come out on to one of the many walkways that criss-cross the gardens and the adjacent fruit and vegetable garden. 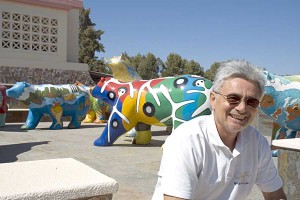 The dancing lady and all her fellows, here at the Kempinski, are a summer exhibition by Karl Heinz Stock.  This is a former banker (in the days before bankers became the pariahs of the 21st century), a present wine connoisseur and a highly successful contemporary artist.

Remember the cows that appeared first in Zurich and then blossomed, or rather calved, all around the world… and the bears that similarly landed in central locations in many of the world’s most important cities. 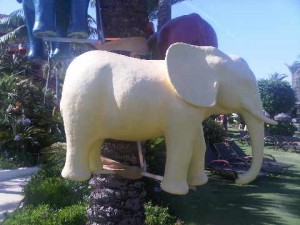 This Stock elephant is one of three hanging around this tree..

In 2009 Stock started one series called Dance of the Bears, and he decorated bear sculptures in a witty, fun, way.  He has done Evolution and Passion themes.   Here, the sculptures are either from his Elephant tree series, or, like the shape outside the hotel’s front door, Contemplating grace, which could of course be Grace if that is ‘her’ name.  The sculptures are for sale, but while they are displayed they are giving everyone a lot of fun. 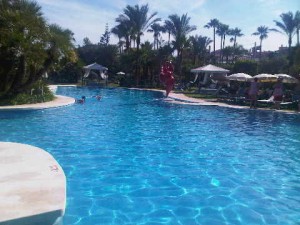 .. and there are Stock dancing-ladies set around the enormous pools

They contemplate permanent art, much of it by Munich-born Stefan Szczesny, one of the leaders of the Junge Wilde art movement.  He has other works hanging at the Adlon Kempinski, Berlin which shows that someone at that company (its boss, Reto Witter?) is a Szczesny fan.  The kids around seem to ignore the permanent art works here, but they certainly take an interest in the Stocks. 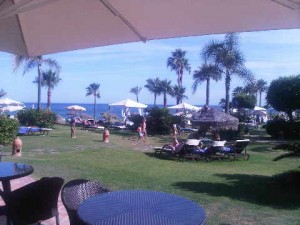 This place is kids' heaven

And oh there are a lot of kids.  When the hotel opened in 1999 it was intended for couples only, and there were no connecting doors and nothing for the adorable little ones to do.  Now, privately owned, it has masses for them to do, and there are oodles of connecting doors.

This is a real family-friendly hotel. Over 27 percent of visitors come back, partly because there is so much to do (and obviously partly for the facilities generally, and the staff – at last rating, this was the top hotel for customer satisfaction in the Kempinski group, and staff are motivated partly by regular parties held two consecutive nights so they can all attend one or the other. 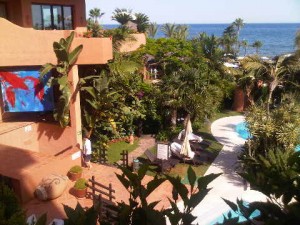 Looking down, past the terracotta main building and one of its permanent art works, to part of the gardens

Rudiger Hollweg, the boss here, says it is actually more difficult running a resort like this than being in charge of a city hotel.  Those repeaters want to know what is new for THEM, the adults (the answer is regularly 2100-start chill-outs on the beach, with loungers and snacks and Perrier-Jouët Champagne).

Since many stay a week or more in summer, and the place runs full all those seasons, they want to see the boss.  And if you want to know, last year, for instance, he had no fewer than 35 royal families checking and one time or another. 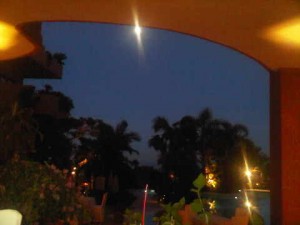 Looking out, from the dining terrace, as the moon provides a central light

There are royal families and royal families. The fact King Juan Carlos took such a personal interest in Spain’s UEFA win, and received the entire team and its physios and other support crew did a lot for the monarchy, especially since he had two of his grandchildren, Infanta Leonor and Infanta Sofia, with him – they were both in Spanish football shirts while he sported a bright red tie.

Royal families, and everyone, from the Middle East have particular needs.  Get up when the rest of those around you are having lunch, and come to dinner when everyone else is leaving.

We were just finishing the bottle of Chivite Coleccion 125 Tinto Reserva 2005, from Bodegas Julian Chivite’s Bodegas Chivite (founded 1647), when four young princesses (not Spanish!) walked in. Only one had her head covered.  Their body language said Nice People.

They had a young male minder with them, and they were chatting so much they probably did not notice how the moon just appeared through the restaurant terrace arch….   and now it is time to think of spas and cultures, and vegetable gardens and the best figs in the world…Wait for tomorrow, my friend.