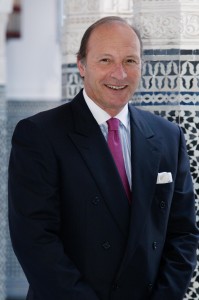 Didier Picquot is theatrical director of one of the luxury travel world’s most-major productions – La Mamounia, Marrakech.  He only has 209 rooms to look after, but there are 17 immaculately-tended acres of lush gardens with heavily-fruitful olive trees and orange orchards.  He has 800 staff, who include 60 gardeners, and four chefs who just cook for the employees.

Head around the pool to the outdoor restaurant, far end

Wake up, many months of the year, and look out over the olive and orange groves to the distant Atlas Mountains.  Head down to the buffet and they have Bordeaux heaters for warmth. Head in to the dedicated buffet servery. Anything you might want is there, even glasses of full-fat or low-fat yoghurt, plain or topped with raspberry or mango purée.

There are large wooden tubs of good French butter (D’Echiré, not quite as mouthwatering as the gal’s favourite Bordier but more than passable).  Help yourself to as much as you want.  And oh the bread table, groaning with Danish, for those who must, and pain complet, healthiest bread rolls, and olive-studded rough-flour baguettes. 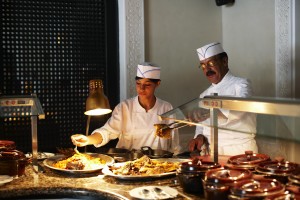 One of the many buffet stations

If you stay long enough you can almost run on to lunch.  Try to be there for the Sunday midday buffet, which they call brunch – the biggest culinary understatement for a long time.  Forget those brunches that are excuses for using a kitchen’s leftovers.

This is luxury spreads one after the other – a separate table for salads, for marinated salads, for cold cuts, for hot vegetarian, hot non-vegetarian, fruits, it goes on and on.

Sunday brunch comes with a glass of Deutz

It is up to the level of Costa Smeralda Cala di Volpe’s midday buffet (170 euros at last sighting, and extra for coffee).  This one, at 107 euros, includes a big glass of Deutz Champagne.  I did not stay long enough to see if coffee is included.

When a baby's chair becomes a work of art...

Didier Picquot goes only for the best. Even at the buffet, the china is Bernardaud, the linens are Rivolta Carmignani. And the high-chairs brought as soon as a family with infants are spied are works of art, sculptures in their own right: they are Bloom Fresco models, black car-seat things on big solid circular pedestals that allow 360-degree rotation  (they are so beautiful one would not mind having one at home even without a baby).

What a way to go - farewell from a Mamounia doorman

Bloom is produced by Ilinko in Hong Kong – the company was started by four new dads who had all worked for the Fortune 500 company Newell Rubbermaid, Australian Simon May, New Zealander Jason Lewis, Mexican Francisco Balderrama and American Jon Lake.

Over  New Year Director Picquot demands a minimum six-night stay at this Leading Hotel of the World. After a mere one night, the girl decided she could eat like this for at least six nights.  What a way to go!