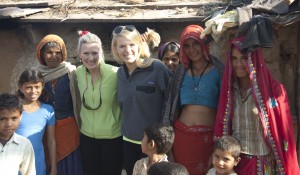 My good friend Mollie Fitzgerald, who runs the luxury travel agent Frontiers International Travel, went to Hyderabad with her daughter Abby.  Here is her report:

‘The regal welcome began at the airport when we were met by a Taj Airport Services Director who whisked us through the airport and ensconced us in a sleek, new, black Jaguar sedan. This is where we were introduced to our butler, Mayur, who would be our silent shadow for the next days.

He shared various facts about the city and Falaknuma Palace as we drove there, about 30 minutes. On arrival, we were met at the clock tower by a vintage carriage drawn by a pair of white horses and transported at last to the “Mirror of the Sky,” as the palace was known. The coup de gras was the flurry of pink rose petals as I ascended the grand staircase.

‘The best rooms are the 17 historic suites in the original palace and feature lavish appointments, high ceilings, palatial bathrooms, andthe services of Mayur! The 43 rooms in the “new wing” are also very comfortable. Not missing a beat, I settled happily into the Begum Suite, done in delicate hues of pale green and pink with hardwood floors.

A walk through the palace with the house historian is a must. He will introduce you to the palace’s incredible architecture and ornate appointments, interspersed with colorful tidbits about the Nizams and their idiosyncrasies. 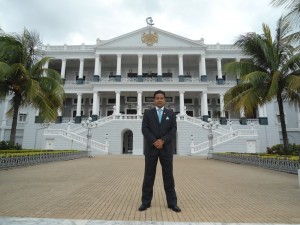 Ranjit Phillipose in front of 'his' palace

We had two spectacular evening meals in each of the palace’s two restaurants: Celeste, Italian-themed, where I had a Caesar salad with crispy pancetta and a trio of pasta tastings; and Arra, with Indian specialties, which included a Malabar prawn curry and the best Indian cauliflower I’ve ever had. The GM, Ranjit Phillipose, is one of Taj’s most experienced and capable set of hands.

‘Hyderabad rivals Bangalore as the IT capital of India and therefore attracts an international business clientele. But the cultural traveller to India must not overlook this interesting city, so different than other large Indian cities and with such an important history. Hyderabad was the furthest reaching outpost of the Mughal Dynasty’s exploits and the mark of its artisans is omnipresent.

During our brief stay, we visited some lesser-known, off-the-beaten-track sites including the Paighar tombs and a traditional weaving center, which were fascinating. Hyderabad is also the “City of Pearls.” I know that seems odd as it is landlocked but something like 70 percent of the world’s cultured and natural pearls pass through Hyderabad to be strung or set.

This is a city after my own heart! It is a must-stop on any South-India circuit and, with the great international airlift in and out of Hyderabad, a perfect place to start or finish. While there, do not miss out on the multi-grain croissants — this might be the world’s first “semi-healthy” croissant. I enjoyed two before starting the long journey home.’ 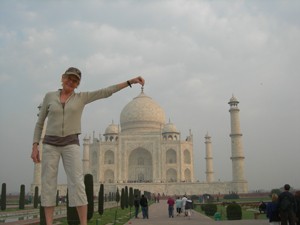 Mary also loves India: here she is 'at' another favourite place

(Mary says: Falaknuma Palace, Star of Heaven, once home of the 6th Nizam, Mehboob Ali Khan 1869-1911, is owned by Princess Esra Jahl, first wife of the 8th Nizam. I visited just before its formal re-opening, November 2010, as a 60-room, all-suite hotel.

The silver-grey palace, atop 32 acres, offers continual surprises.  Here is the world’s longest dining table (seven pieces of oak forming a 108-foot length to seat 101), here is a library with 5,900 books, here is the world’s first telephone exchange, now purely decorative of course).

You are met by a moustachioed retainer with a tall staff who was formerly the 8th Nizam’s bodyguard, and escorted up 34 original stone steps. The marbled Jiva Spa is complemented by an outside pool emulating a winding river.  As Mollie says, above, GM Ranjit Phillipose, whom I had first met at Taj Boston, is a gem.)