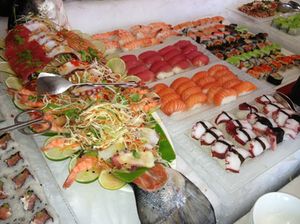 Just as the gal predicts that those staying on the south bank of Abu Dhabi’s Grand Canal will want to cross over for gelati at Dolce, so those staying on the north bank will cross over to try Pearls & Caviar on the south bank.  They will also head to another of the south bank’s luxury hotels, Fairmont Bab Al Bahr, for its Friday brunch (what the gal would call Sunday brunch in nations where the weekend is Saturday to Sunday).  Oh boy, come Fridays, here in the UAE, knowledgeable gourmets and groups of friends meet up, to eat-out.  No-one seems to entertain at home. 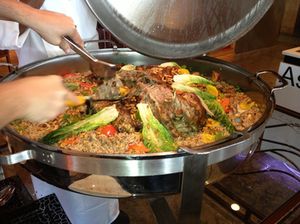 .. and seafood and rice

The buffet tables stretch out of the door and along the corridor of CuiSine restaurant.  There is Arabic, of course, and Chinese and Japanese and everything else you can think of. A young guy at our table starts with a mountain of sushi. I go for a healthy salad, and then lots of sashimi, cannot get enough of it.  Main courses include a whole fish cooked on top of what looks like a paella for an entire sumo wrestling team. 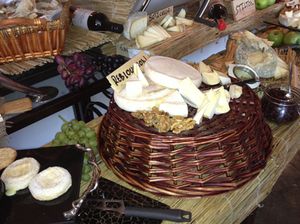 Nils Axing, who runs this hotel, zeroes in on the cheeses but by that time I am spent, eaten-aplenty and more, but who cares, it is a weekend.  We talk about what we all eat for breakfast.  The sushi addict, who runs a restaurant in the Stockholm archipelago, starts his day with smoothies. Faces look amazed when I recount my usual breakfast at home, which includes bread home-made by the man in my life.  Around us there are, as usual, kids who cannot make up their minds what to choose from the splendid buffet spreads and end up with, say, a couple of bread rolls. 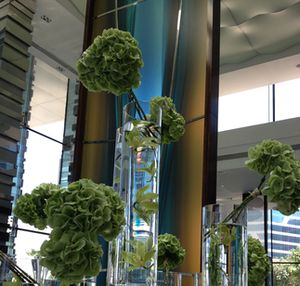 Simplicity of a flower arrangement

Perhaps buffets are like department stores.  The more you put out the more difficult it is to choose. And yet, in the retail world, a Nordstrom limits the number of frocks on a rack and charges ten times as much as a Wal-Mart.  On our way out from brunch I exclaim at the lobby flowers, sheer simplicity.  Once again, less is more.  In the lobby here, by the way, look far up at the ceiling. There are 26 shapes hanging, like inverted nude-coloured mushrooms, about three feet across. Modern art by a local firm. 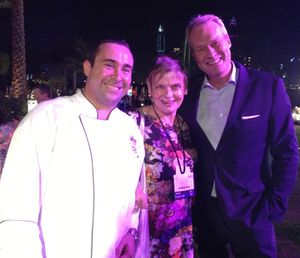 This Fairmont, now three and a half years old, has a younger sibling, Fairmont Palm Jumeirah on the trunk of the man-made Palm Jumeirah in Dubai.  Fairmont, as a group, threw one of the best parties of the recent Arabian Travel Market there, bringing in all the chefs of the region.  To me, the highlight was the Abu Dhabi corner, with Fairmont Bab Al Bahr’s talented chef Cladys Magagna there.  He and his team were cooking Australian wagyu, as from the hotel’s Marco Pierre White Steak restaurant.  They got through 60 kilos that night, cooked on the grill right there in front of us all and served as single-bits, on metal double-leg toothpicks.  Yum yum. 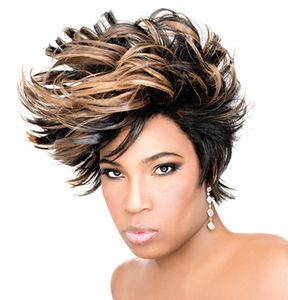 Everybody who is anybody was there at that Fairmont party, including the Fairmont President, Jennifer Fox.  Fairmont is becoming renowned as one of the best, if not arguably THE best, party giver, and this one was up to its amazing usual level.  They even flew in raspy-voiced American singer Macy Gray to sing and, unlike the rude Justin Bieber who sang elsewhere in Dubai a couple of nights later, she appreciated her adoring audience – JB started two hours late, on both his nights.