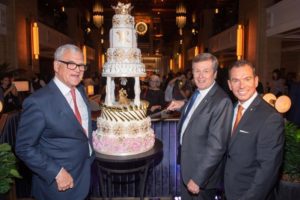 Fairmont Royal York, Toronto, had a grand 90th birthday celebration on Tuesday June 11th, 2019. Hosted by GM and RVP Edwin Frizzell, many honoured guests, including the Mayor of Toronto, John Tory, and  Paul Campbell, representing KingSett Capital, majority owners of the 1,348-room hotel, toasted the new-look main floor, redesigned by The Rockwell Group. The hotel’s signature clock replaces the orginal four-sided statement clock, built in 2002 by the Electric Time Company. The hotel’s new-look bar is intentionally called CLOCKWORK Champagne and Cocktails, and the new restaurant is Reign, to show the hotel’s royal connection. The hotel had been formally opened on June 11th, 1929, with a magnificent ball in its Concert Hall, which in those days had a Casavant Frères pipe organ.