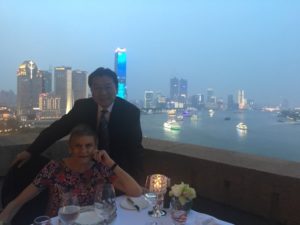 Among the hundreds of thousands of tourists, who probably included about a hundred non-Chinese, on The Bund that afternoon was a bride in a red dress, rushing frantically through the crowds followed by a female dresser holding the train off the ground. Somewhat incongruously, the dresser wore a face mask as if she had a cold, or was afraid of catching one. Half an hour later the gal saw the bride, now perfectly composed – see above – as she and her dearly beloved kissed for their official cameraman outside the main door of the Fairmont Peace Hotel, a favourite photo spot in Shanghai. Red, explained the hotel boss, George Wee, later, is the lucky colour, for posperity. 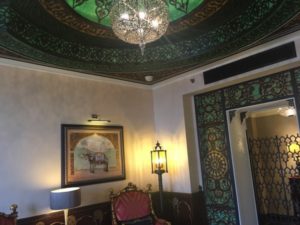 Official wedding photos may be taken up to six months before the actual ceremony, during which the bride might change outfits four times in all: canny brides rent their robes, or go to Suzhou, known for lots of choice at good prices. If a bridal couple is clever, good money can be made out of a wedding. Guests hand over red paper envelopes containing cash, which can more than cover costs, and unlike in Japan, where the happy couple traditionally then gives back a gift worth roughly half what the guest had given; in China the couple keeps the lot. I was told by one hotel that its best wedding package includes not only a bedroom for the wedding night itself but one for the first anniversary, by which time perhaps baby comes too. 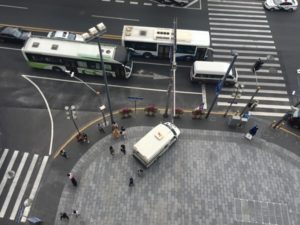 For dinner, George Wee had booked the best table in town, or at least actually looking over The Bund. The Cathay Room, on the ninth floor of this historic hotel, has a cantilevered terrace just big enough for a table and two chairs, so there we sat, looking down at all the activity on The Bund, and across the river at Pudong. All evening brightly-illuminated dinner-cruise boats ply up and down the river. What would Sir Victor Sassoon, the banker who built this structure in 1926, think if he came back today? Then, no illumination on boats (no ‘dinner-cruising’) and Pudong was still paddy fields. In 1929 this was turned into the Cathay Hotel, its name changed after the first international peace congress here in 1952. 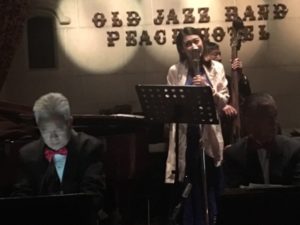 After dinner we went downstairs to this luxury hotel’s unique Old Jazz Band, playing here since shortly after the hotel first opened. Tonight, I was entranced, as Justin Trudeau had been a few weeks before, by the Shanghai singer, her tones simultaneously soulful and passionate – see the video below. The main band, oldest player mid-90s, goes off duty at 9.30, presumably so they can totter into bed with Horlick’s or hot milk. A younger band, average age mid-70s, then takes over, until well after midnight, but we did not stay to hear them. And then it was time for my own bed, this time in suite 520, the Indian Suite, the very antithesis of minimalism, with even the ceiling a testimony to how much and how many colours can be combined without straying into over-kill. The windows, all with stained glass around their edges, opened, to give even better views of The Bund outside, and, in the morning, there were the kite flyers. SEE TWO VIDEOS BELOW,  THE OLD JAZZ BAND – AND INDIAN SUITE, 520