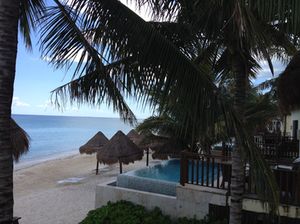 Looking across a beach villa to that glorious ocean

Time to give a bit of attention to Fairmont Mayakoba, main host of this ILTM Americas, from its start in 2012 – and now 2014 has been confirmed here, September 22-25.  It is about a mile from the main building to the beach. Immediately leaving the main building you enter a Venice-like complex of connected waterways, winding between and around one or two-floor villas, and under bridges that link the casual-luxury hotel segments. Best way of getting around, says the gal, is by bike. 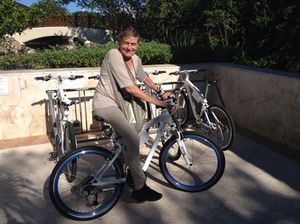 The bicycles are gorgeous, brand new BMWs, so new that mine had only just come out of its box. Riccardo, the famous invisible butler who looked after me a year ago, has got me the bike and a lock, badly needed as bikes are first-come, first-served, so if you leave a bike somewhere there is a good chance you will never see it again. This can be jolly annoying when you come out of the gym (which is good, with at least a dozen Pilates balls) and you need urgently to be ready for yet another function. 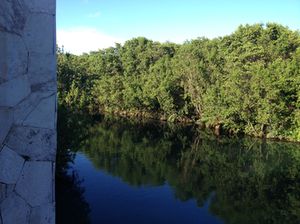 This year I was in 626, upper half of a two-floor block. It did not look much from outside. From the narrow winding road, all you see is white walls with a six-foot wood screen, which hides what appears to be an outside shower but you cannot really get out there.   Who cares, however, when you can get out on the balcony at the rear of your house. Inside, by the way, someone had thoughtfully put a proper swivel chair at the desk – I could swivel round, to  watch the so-calm water and the mangrove opposite. For bird-watchers, this place is heaven, with 150 different species. 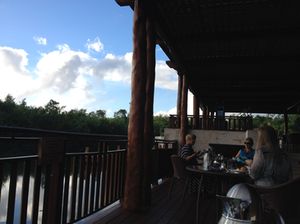 Some breakfast in their rooms but breakfast in the main restaurant is great for networking at conference times.  Sit outside, on the terrace, watching the water, and the birds. Gorge on papaya, and a magnificent green juice that seems to have kiwi in it and celery and pineapple and is absolutely addictive.  I wonder, as I take in the view, if the Japanese and Mexicans have anything in common: both seem to cut their toasting bread at least an inch thick. 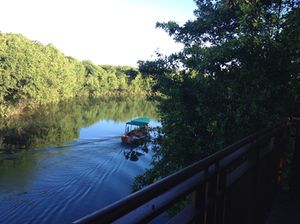 Sometimes a boat goes past

Somehow, however frantic a conference, if you can get the occasional burst of a beautiful natural view you feel energised. Whenever I was back in my 626 I would check the view from the rear windows.  There were always birds, and sometimes boats plying the mangrove waters between this resort and the other luxury hotels that are part of Mayakoba, Banyan Tree and Rosewood.  Within two years, too, there should be an Andaz, as well.