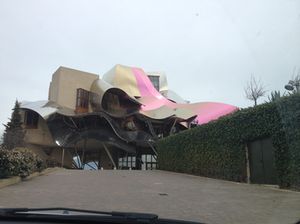 First sight of the hotel

Drive from Logroño to Elciego – when one does, just occasionally, when in Spain – you cross the Ebro River, and thus out of La Rioja state and into Alava. Three hundred yards east of the Ebro there is a bend in the road and OMG, what is THAT?  ‘That’ is one of the world’s iconic luxury hotels, Hotel Marques de Riscal, a Luxury Collection Hotel.  Frank Gehry, whose Guggenheim Museum in Bilbao is only an hour’s drive away to the north, was approached by the Marques de Riscal winery’s owners to design a ‘contemporary’ office block with a few bedrooms so they could host official visitors. Initially, apparently, Frank Gehry said no, but eventually, says the gal, he was seduced over a bottle of Marques de Riscal 1929, the year of his birth. 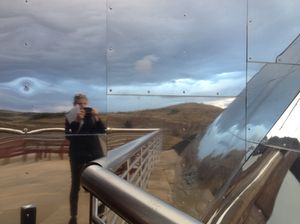 Reflected in the ‘sky’, a silver strip

He has come up with a seemingly-floating sculpture of 15 ft-wide strips of metal in colours that remind him of this Rioja-appellation wine. The pink-tinted Australian titanium strips, or ‘canopies’, are for the wine. The gold-tinted Australian titanium canopies are for the gold wire netting that is distinctive to some of the Marques de Riscal labels. The anonymous silver canopies are for bottle caps. You can stand on some of the balconies of the four-floor building hidden beneath the canopies and you are reflected, as if against the sky, by the metal.  Yes, hidden a little under the canopies is the building that was to be offices and official guest rooms. But the idea, like Topsy, just grew. 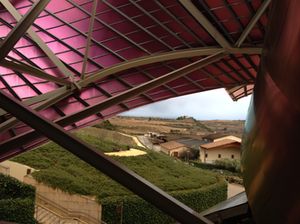 Looking out from the air-bridge

The concept evolved to become a 43-room hotel.  Those staying in the original block, known as the Gehry Wing, will feel cosily compact, and their windows are not vertical but angled, to fit the Frank Gehry creation.  He has also, by the way, done all the interiors, which means that the hotel’s housekeeping team not only have to contend with cleaning odd-angled windows (answer? bring in abseilers) but what do they do with white wall-set bedside lights that look like two-foot wide shower caps (answer? no idea).  Frank Gehry also sent his team out shopping, so some of the furnishings are Alvar Aalto, others B&B Italy. Some furnishings are from Frank Gehry’s own mind. 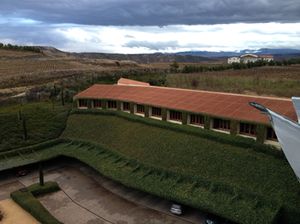 Once it was established that this would be a hotel, managed by Starwood, another block was planned.  This is more conventional, as the photo shows.  Stay here, in one of the upper-level rooms, and you have more space, with vertical windows and, if you are facing the right way, the view of the Frank Gehry ‘sculpture’.  At ground level, partly hidden by a greenery-covered open parking area, are the spa (by Caudalie, the wine-spa people who started at Ch Smith Haut Lafitte in Bordeaux and extended to such places as The Plaza in New York), a lovely 60-ft indoor pool with inset vitality features, and a 24/7 gym, with equipment by a company I had not come across before, Polar.  Offices are in here too, yes those same offices that were going to be in the first-draft Frank Gehry design. 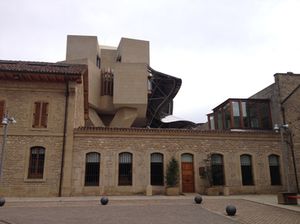 The ancient winery, with the new Gehry building centre rear

The hotel is actually conjoined to the winery, which used to see about 9,000 visitors a year, but since the hotel opened in 2006 the number has soared to over 60,000. Everyone staying in the hotel, of course, takes an extensive winery tour.  Few, however, have the good luck of being taken, as I was, through securely locked doors into the historic wine cellars, where 37,000 bottles going back to 17 of vintage 1862 are stored. The cobwebby bottles (spiders eat the grubs that attack corks) are not marked, but bin numbers, in no order, allow the cellar master to pull out a particular bottle, perhaps for a VIP’s birth year …. 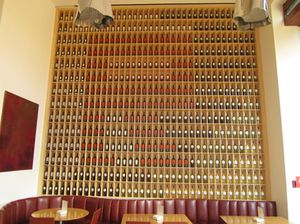 A wall of 504 wine bottles, with reds forming an R

Marques de Riscal, the hotel, has three restaurants, which is extraordinary for a 43-room luxury hotel but all of them attract locals, and prices are remarkably inexpensive.  Even in the Michelin-starred Marques de Riscal restaurant, where local celebrity chef Francis Paniego is the consultant, you can get an eight-course tasting menu for €70. I tasted such delights as ‘red wine caviar’, which is red wine mixed with glutinous algae agar-agar so that it become spherified into little globules.  I had delicious lightly-smoked cod with ‘coal’, namely pepper purée cookies that are finely crumbled. Of course everyone drinks Marques de Riscal wines, not necessarily the ‘oldies’ but perhaps some of those that show the outline of the 2,750-acre vineyard estate on the label…