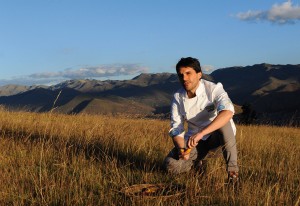 In July 2012 Virgilio Martinez opened Lima London.  When he grew up in Lima there were no cook schools and he learned his skills by cooking with chefs from many countries.  But Peruvians – he told the Financial Times – are passionate about food.

Their native cuisine is fed by Italian, South American and Spanish.  Now he not only oversees his London restaurant but he is also chef-patron of Central Restaurante, in Lima, and he is hands-on consultant at Palacio Nazarenas by Orient-Express, in Cusco.  The gal went to investigate. 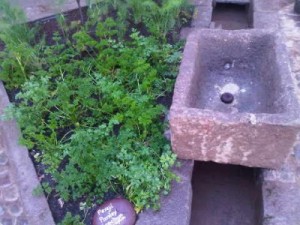 The Palacio grows its herbs on-site (the ancient trough is used for washing vegetables, in cooking classes)

Palacio Nazarenas, a reconstruction and expansion of a mediaeval palace and convent, opened officially on September 8th, 2012.  The 55-room luxury hotel is built around five courtyards, one of which is filled with herbs, carefully named.  In the centre of this courtyard are centuries-old grinding stones and an old stone tub.

Palacio Nazarenas offers a unique cook class concept.  You go out to the local market and buy produce, bring it back and sterilise it in the stone tub, and the hotel’s chefs show you how to combine your produce with some of these fresh herbs to produce something truly memorable, truly Peruvian. 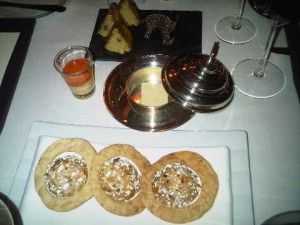 At dinner, breads include gluten-free, behind, and planet-shaped rolls held loosely in flatbread ‘orbits’

The hotel’s restaurant, SenZo, is open from 0500 so you can get the earliest train to get to Machu Picchu.  For breakfast, they so, somewhat uniquely, a personalised buffet which means everything is brought to your table, which groans under displays of fresh fruit, cheeses, cold cuts and a ceramic pot of breads.

At dinner, dozens of candles are lit and the room glows.  Now you have a choice of all-vegetarian, or non-vegetarian.  I went veggie.  The evening started with a display of breads, including gluten-free and, a clever concept, little ‘planet Saturn shapes’, small wholewheat rolls held in unattached rings of flatbread. 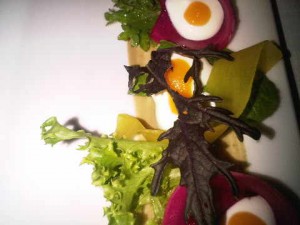 Raw vegetables with La Salle yoghurt – is followed by…

Now the dinner starts, properly. Of course I had to start with a Pisco Sour.  First food offering was a plate of raw vegetables, with La Salle yoghurt, and mustard leaves, and tree tomatoes and muña local mint. La Salle is a farm in Urubamba in the Sacred Valley, owned and run by Americo Herrera Pezo who supplies masses of the produce for the hotel. 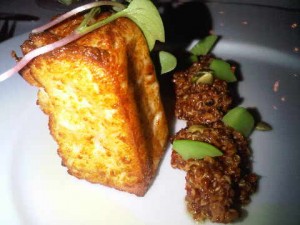 .. a tower of La Salle cheese XO with a purée of Lima beans …

Lima beans are thought to have originated in the Andes around 2,000 BC.  Kiwicha, or Amaranth, is a supergrain like quinoa: it was one of the foodstuffs of the Incas (it is also known as ‘love lies bleeding’ as it was used to stem bleeding. 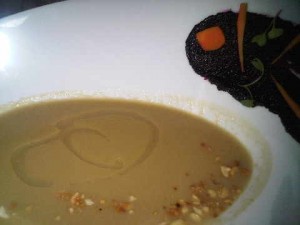 .. and a leek emulsion, with an artwork of babiest carrots on a beetroot smear.

Oh the things one finds out searching the ultimate luxury lifestyle.  I am not actually a soup person but this no-deviation meal meant soup had to come.

The oval dish containing the Infused leek emulsion with Urubamba carrots, beetroot compote, Quillabamba peanuts in fact was a bowl of soup, with a ‘painting’ of baby carrots on a beetroot base at one end of the bowl. The peanuts came from the town of Quillabamba, near Machu Picchu – it also produces some of the best coffee in Peru. 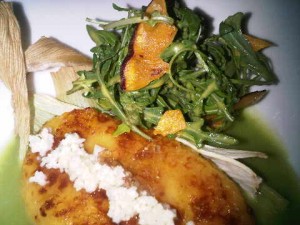 The main course, in the vegetarian menu, is a mélange of crunchy root veggies …

The main course, if you can call it that, is Crunchy root, arugula, muña (mint) gel.  There really is not much to say about this.  Crunchy roots are one of the mainstay of Peruvian cuisine – their potatoes, by the way, are delicious and the French fries are some of the best I have ever had.

I am eating so much I should think about the spa.  (Its relaxation room, filled with living plants, is like a conservatory, and one of the five treatment rooms has two glass windows in the floor so you can see down to old Inca excavations, beautifully illuminated.) 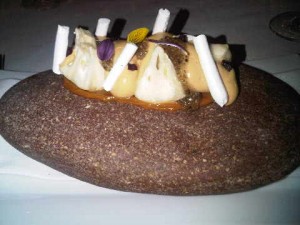 .. and finally, dessert, served on a real stone.

The finale to this epic meal is the dessert, described simply as Custard apple, crème caramel, chia, beetroot.  What appears is a big black stone, about eight inches long.  On top of this is a display of edibles, little bits of custard apple sticking up, held together by the crème caramel.

I must confess I cannot remember the beetroot and I did not recognise the chia, which I later find out is Salvia hispanica, a plant grown for seeds that are extremely rich on Omega-3 fatty acids.   So I am sure all this did me lots of good. 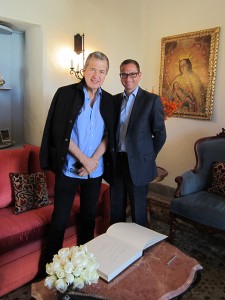 Even in the few weeks it has been open, the hotel, run by Stephan Post, has had some important visitors. The world’s most famous fashion photographer, Mario Testino, stayed on his way to Lima to open his foundation in Lima, Asociacion Mario Testino MATE, a philanthropic venture supporting arts, culture, AIDS charities and Save The Children.

I wonder if he too tried such a memorable meal?  I bet he, too, admired the thoughtfulness that has gone into the quality of this hotel.  Your room comes with both finest towel and grey silk robes, and velvet shoe trees, and three types of herbal bath pillow, and instead of a boring ‘privacy’ sign you have a little fabric doll-shape showing two local people asleep.

One of the many other lovely touches is that when 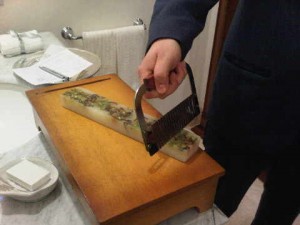 you arrive, your butler brings a miniature guillotine, and lengths of herb-encrusted local soaps, and cuts off the ‘flavours’ that you would like to try.