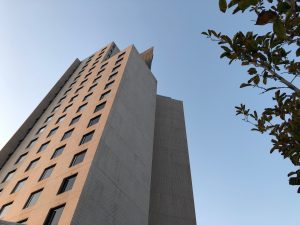 It can be an advantage to have years of experience and Hilton Beijing is not only proud of its quarter century but is using it to good effect.  The main 25-floor block, left, was finished 1994 and complemented in 2008 by a new semi-circular attached building, which in all gives this hotel, in a busy commercial and diplomatic area of town, a total of 506 rooms.  Some are currently being re-done and it is essential, says Austrian GM Stefan Schmid, that we do not make them too modern.  He is working closely with the property’s three sets of owners, and with the designers, Hong Kong-based CCD, to ensure this. 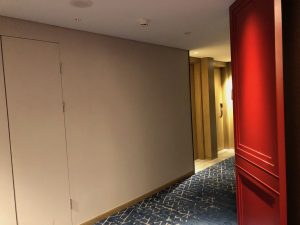 Personally I think the upper corridors are just brilliant. A mere hint that the hotel has tenure is shown, for instance, by panels looking like old-city doors, and having false ‘shutters’ that reveal a couple of centimetres of Old Shanghai. Elsewhere, corridors have occasional Elizabeth Arden-red doors, full size.  The overall effect is extremely pleasing. This is a hotel that wants to take stress away from its busy customers, be they foreign or from elsewhere in China. The fitness centre is extensively used, as is the indoor swimming pool: one of the two squash courts remains (its twin was long ago incorporated into the health club) but the outdoor tennis court has been boarded over, to become a useful summer-long terrace for parties and other events. 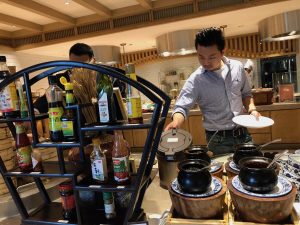 Two features are prominent in all hotels in China.  One is the need to house staff, who invariably live far from home. This hotel, when not partially closed for refurbishment, generally has 475 colleagues, of whom about half are housed, in blocks about 30 minutes away by public bus.  The other generalization is that nearly all Chinese men, and many women, smoke incessantly, which makes it very difficult where smoking is banned in public places, especially hotels – a fine of RMB1,000 (US$141) is automatic. Stefan Schmid says most of the challenges regarding smoking come from the hotel’s Chinese restaurant.  The hotel, by the way, also has a steak-grill restaurant (Chinese love their own food but they do like to alternate with big pieces of meat). 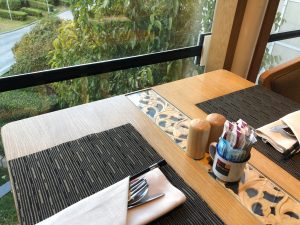 Makan, is an all-day, all-way restaurant that since its new look, a year ago, has become a real wow place. It could be thanks to AI or to skilled planning, but the many seating areas give a feeling of exclusiveness and yet, at least from wherever I checked, you can see what is going on.  Many of the wood tables are inset with a carved band, protected by a glass overlay: this design really says hey, look, this is from southern Asia.  And, a lovely touch, outside Makan an entire wall is a characteristic Makanese mural, see above.  I breakfasted in Makan, but I did also pop next door to the lounge in the newer, 2008, block, which is run totally club-style.  Everyone in that block, regardless of room level or number, can use it: basically both breakfasts were the same but somehow, because of the ambience, Makan was the more fun. This entire hotel, however, has not only the efficiency of a well-oiled machine but personality too, thanks I am sure to the loyal staff, nine of whom have been here for the full 25 years. NOW SEE ROOM 1715