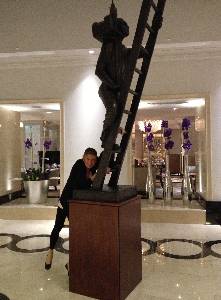 A 'man' holding the 'Houses of Parliament'

Lobbies can be dominated by memorable artworks – think of George Lappas’ lifesize gentian-blue dancing man at the luxury hotel that is Athenaeum InterContinental Athens, think of the hundreds of keys suspended on the wall behind the check-in desk at The Grove, near Heathrow, and the silk weaving behind the front desk at the new Park Hyatt Chennai.

Go in through the glass doors of the just-opened InterContinental London Westminster and you are greeted by Tom Clark’s lifesize man climbing up a ladder.  He is balancing a builders’ hod, holding not bricks, as usual, but a scale model of the nearby Houses of Parliament, and of course the gal wanted to get in on the act. 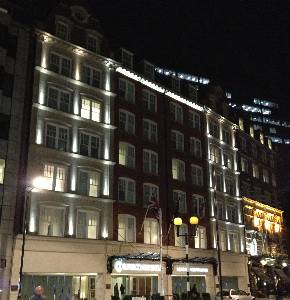 Yes, this is the new politico centre of London.  The 254-room new-look InterCon opened that revolving door on November 27th, 2012 and, unlike most openings, where the owner or operator stage manages a VIP who just happens to be first guest, here the launch customer was truly genuine.

He came out of the tube underground, simply crossed one road and two minutes later was walking past the six floor building.  The doorman, one of three of the all-professional employees who has come from the military, asked if he could help?

The guy said he was looking for the best place to stay, so he stayed, of course fêted by boss Andrew Coney and shown to a lovely room. 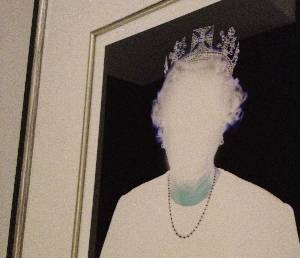 He found himself in an art gallery.  Here, the behind-reception wall has a stern metal birds-eye view of the meandering Thames.  Turn to your right and there is Chris Levine’s photo art of The Queen, who appears to be faceless (art, stupid..).

Turn to your left, to the concierge’s salon, with comfortable scarlet and black seating, and one wall is a military alignment of that English stalwart, the bowler hat.  They are, apparently, glued down, to prevent nosy fingers trying them on…

Behind is a giant Georgia O’Keeffe-style representation in scarlet and black that, with your eyes near closed and several pints of English ale on board could, just about, be large poppies. 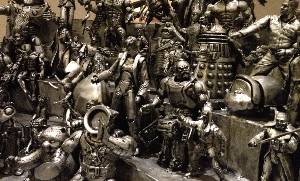 Parliament, as portrayed by Evil Robots

The most unusual of all the artworks is, undoubtedly, Parliament in the round.  This is a four-foot diameter three-dimensional sculpture, all silver and all, one is led to believe, made of papier-mâché.

It is not quite round – there is a cut out about 15 inches at maximum so you can peer in.  This is the idiosyncratic representation of the ruling body of the UK as seen by Evil Robots, who turn out to be two young Brighton guys who call themselves Ed Evil and Dan Robotic.

Their work, which they say combines cool with geek, was discovered by television design commentator Laurence Llewellyn-Bowen in 2011, since when it has become something of a cult. 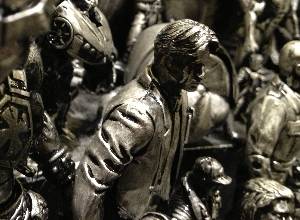 The Prime Minister, by Evil Robots...

Evil Robots specialises in taking elements from comics, film movies and popular culture and caricaturing them into an implausibly plausible situation.   Here, in their rendering of the House of Commons, you find Harry Potter, and Toy Story’s Woody, and a weird octopus with tentacles that wrap themselves around others sitting in the place where the House’s Speaker, the not universally-popular John Bercow, sits and unfortunately wields too much power (fortunately his ridiculous lamppost of a wife is not immediately identifiable). I cannot recognise, either, the characters who sit in the seats occupied in real life by the Prime Minister and his cabinet. 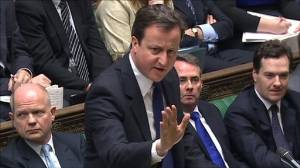 .. but will the real David Cameron please stand up?

As far as I know David Cameron, the current Prime Minister of the UK, has not yet visited this luxury hotel, closest five-star to the Houses of Parliament and to his official home, in Downing Street.

But many of his colleagues have already found it and, as a result of the required six Members writing to Parliament’s Sergeant-at-Arms, a division bell will be installed in the hotel’s incredibly popular modern pub, the Blue Boar (which is already welcoming over 300 customers every evening, even on a Monday).

So they can be networking in the Blue Boar and a bell will ring to let them know they have to be back in the House, to vote, within eight minutes.