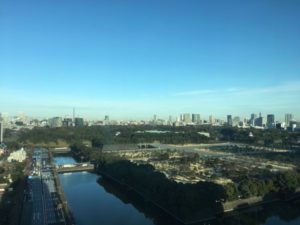 No wonder everyone was smiling at the gorgeous Peninsula Tokyo. That very day it was announced the luxury hotel has 2017 Forbes five star awards not only for the hotel but also for its spa. There were lots of other celebrations, too. Sakura, cherry blossom season, starts officially March 24th, 2017, in Tokyo but the gal found that here they were already trialling sakura cakes – see them above, and on the video. The curate’s stand delicacies were displayed next to a vase of early blossom that the hotel gets from Gunma Province, 30 miles away from Tokyo. As of the official blossom period, sakura specials will see the lobby filled with hundreds of ten-foot blooming trees: there will be sakura-inspired cakes with 20 different teas, and, à la carte, sakura buns, sakura latte. sakura popcorn and even sakura margaritas. 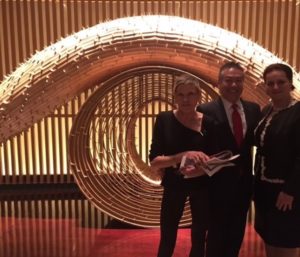 This is such a year for celebration. The hotel reaches its tenth anniversary, and all the passionate staff wear mizuhiki, twisted robe, designer pins. As part of the celebrations, Peninsula Tokyo will be partnering with Rally Nippon, a four-day road event for 80 old cars, all pre-1974. Organised by Rally Nippon, the route takes in several UNESCO heritage sites as it progresses from Kyoto to Tokyo, where it finishes October 24th, 2017 here at the hotel. Two nights later a gala will be hosted, to celebrate the rally, the ten years of ITS existence and, more important to global luxury hospitality than anything else, the first decade of THIS hotel. Chefs from all Peninsula hotels worldwide will fly in to cook. There is a lot of flying going on this year. This April a culinary team from Peninsula Tokyo heads to Peninsula Paris for a promotion. In August, Peninsula Tokyo’s energetic Australian GM Sonja Vodusek flies to Los Angeles personally to escort 80 excited travellers taking part in the first Peninsula Grand Inaugural Crystal Aircruise, as it circumnavigates the world of Peninsula in a specially-converted B777-200. 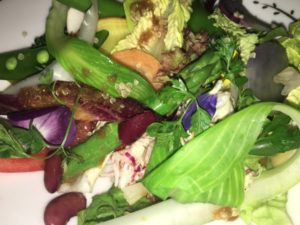 From Tokyo, the global travellers  will be escorted on the next leg of their private jet circumnavigation by the GM of Peninsula Beijing.All this news tumbled out as we dined up on the hotel’s 24th floor top floor, in Peter, named for the one and only Peter Borer. Of course, as I looked through 360° around Yabu Pushelberg’s fairytale interior and the real theatre of the Imperial Gardens far below, I knew I had to start with the signature Peter salad, with 15 healthy ingredients (as a surprise, the individual cones of Bordier butter had dried Japanese seaweed sifted over, table-side). My glass of Peninsula Pinot Noir, Keller Estate Sonoma, 2013, then went brilliantly with 40-day dry-aged striploin, with sides of cauliflower purée, and pan-fried asparagus. 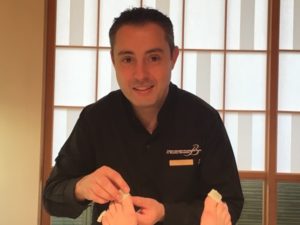 And then I went to bed, leaving Sonia Vodusek and her colleague Mark Kobayashi to while away the night supervising the switching of the hotel’s WiFi connectivity to support unlimited devices – of course, being Peninsula, and in Japan, it was back working, and perfectly, at the stated hour of 5 a.m. on the morrow. Naturally, too, there was consistency, like the world’s finest omelette – best described as fluffy scrambled eggs in a light shell, magically produced with rubber-ended chopsticks. There were more surprises. Bastien Gonzalez’ top disciple, a Toulouse podiatrist called Benoit Perie waited personally to give my feet 75 minutes’ pampering, far more than all the tender loving care they had had in the previous couple of decades. After that I imagined I was on a silver cloud, or at least in one of the luxury hotel’s Rolls-Royces.  SEE A VIDEO OF MY LOVELY SUITE, BELOW