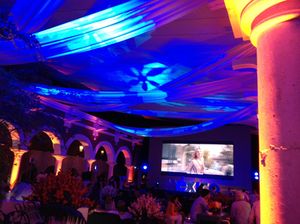 As anyone who goes to any several-days conference will know, there is always a fun night. In the past the gal has been, on such occasions, to converted railway stations in Paris, and by ancient train to a field outside Budapest.  The industry norm is that however good your luxury hotel is, for some inexplicable reason you have to put all delegates at the event into buses and take them, sometimes for as long as possible, to some distant spot. The gal is reminded of Tony Lumpkin in Oliver Goldsmith’s She Stoops To Conquer, who drove Mrs Hardcastle round and round in a field, in the dark, and, unbeknown to her, dropped her exactly where she had started. 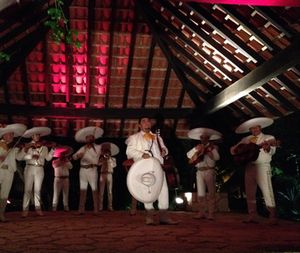 Here at ILTM Americas the away-evening was at La Hacienda Henequenera del Parque Xcaret. Twenty minutes after leaving our respective hotels we were dropped in the dark, with some trees and just enough lighting.  Then came a ten-minute walk, between paper-held candles on the ground.  We passed some stables with a baby foal, and came upon musicians in big hats. Turn left for literally-iced margaritas. Admire long carpet-like displays of flowers placed on the ground.  Go in through the monumental side arch of what appears to be an 80-foot high stepped pyramid. 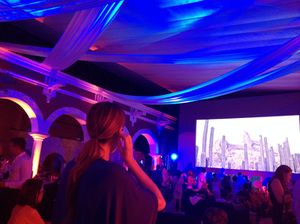 More of the hacienda’s courtyard

From what I have since learned, this hacienda celebrates the henequen, or sisal, that was the major crop of this area, and you are supposed to be able to learn about its farming, and how sisal is extracted. But that was for another visit. Tonight it was an exercise in how to feed about 550 in a rectangular area the size of two tennis courts, its open top covered in white strips of cloth. The answer was – lay on lighting, and music, as loud as you can make it, and buy in as many tiny disposable dishes to hold one-bite morsels of food as you can. 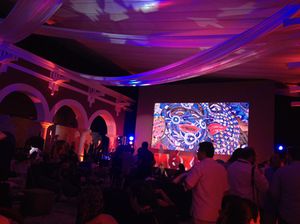 The colours changed, the entertainment evolved…

For over two hours some ate (the guacamole was delicious, but not enough of it), some did dance, some just sat in low chairs mindful of the cobbles and stone that had played havoc with their Louboutins as they elegantly tripped here from the buses. Some might have wished that Oliver Goldsmith had been involved here, and the evening proper would have been back where it was last night, at the casual-luxury Fairmont Mayakoba.  Last night they threw a really fabulous party, billed merely as a cocktail but oh, the food, including giant roasts carved to order, and it was possible really to talk.