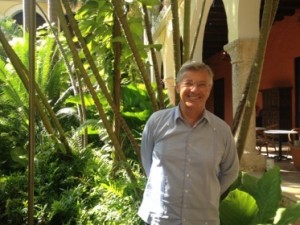 Richard Launay in his garden

In 2011 Richard Launay arrived to run Cartagena’s iconic Santa Clara, a Sofitel Legend hotel. He found the inner courtyard of the five-floor former convent was, thanks to dense undergrowth, too dark. Landscape gardener Pablo Maciá’s septuagenarian mother, Senora Gloria Escobar, agreed it needed completely replanting, with real ‘Colombian’ trees and plants. Two years later local flowers began to appear and now the gloriously light garden is also home to many Colombian birds, including tiny indigenous humming-birds, who are nurtured with feeders filled daily with sage-flavoured sugar-water. This luxury hotel, says the gal, does more than its fair share for sustainability, and the local community. 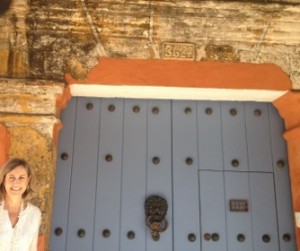 Richard Launay asked his colleague Carmen Otero de Millán, who had previously headed Cartagena tourism, to share some of her favourite places in town. We passed the home of Nobel literary prizewinner Gabriel Garcia Marquez (Gabo), 1927-2014, author of One Hundred Years of Solitude, and Of Love and Other Demons. She pointed out weekend homes of some of Colombia’s richest – that list is headed by Luis Carlos Sarmiento, Grupo Aval Acciones y Valores; followed by Santo Domingo Group heir Alejandro Santo Domingo Davila, and the founder of Organization Ardila Lulle conglomerate, Carlos Ardila Lulle. 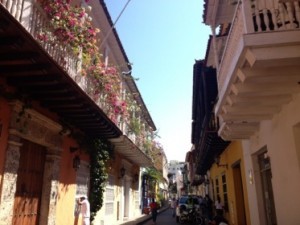 Many of the streets in the Old Town of Cartagena are closed to cars and you can walk for hours, admiring brightly coloured and well-kept houses, with upper-floor cantilevered terraces. There are restaurants, and boutiques, and some boutique-style hotels. Many developers want to come here but, apparently, it costs about three million – US dollars, that is – to buy something in the right part of town. When I was last here, in 2012, scaffolding over the Collegio Salesiano was rumoured to be hiding a forthcoming Four Seasons. The scaffolding is still there, looking considerably dusty. 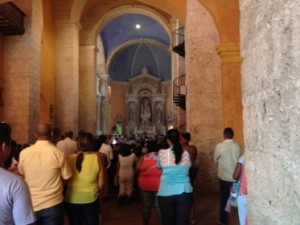 Going to church can be a highly sociable experience

Here is a tip for anyone lucky enough to be visiting Cartagena, a city of 950,000 (with nine percent unemployment). Leave your luxury hotel in time to drop in to mass at one of the many Catholic churches here. One I attended had about 500 local worshippers, kept more than happy by a live local band playing colourful Colombian music. It was a unique experience.