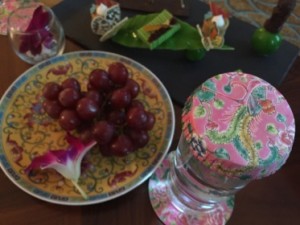 The gal often wishes luxury hotels would do things differently, more of the time (though obviously not all the time). It may not be big things that need changing – think of the just-launching Zoku brand, where bedrooms become kitchens, with the bed tucked into a cubby hole upstairs. No, think more realistically of the effect of these patterned paper coasters and caps for glasses, at InterContinental Singapore. Without being sexist, is it fair to hint that it needs a female GM to come up with such a low-cost invention that has such a high-impact effect? Well done Tash Tobias, an accountancy graduate who naturally understands that all expenses must bring a return. She is GM here, and she oversees ten IHG hotels in all, in Indonesia, Malaysia and here in Singapore. 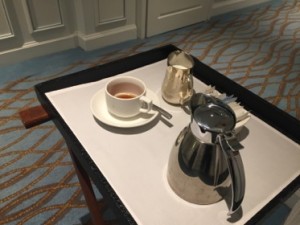 Another lovely touch here is wake-up tea or coffee, your choice. Thoughtfully, rather than knock on the door and have guests in negligée or nothing have to leap out of bed to open up, the tray is left outside, on a butler’s stand. There was just enough coffee to satisfy the wake-up need, but not enough, sensibly, to stop anyone subsequently going for breakfast. The knowledgeable here, at this 443-room hotel, definitely book something with access to the first floor (upper, or second floor for Americans) Club lounge, run by the superb Neo Zhi Hui, better known as Lucinda. Her welcome letter cleverly lets you know not only opening times, and such perks as Martini Brut at cocktail hour – when kids are not allowed – and free pressing for two items. 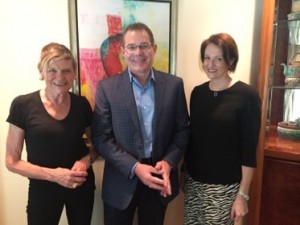 I had breakfast there, with Tash Tobias – yes, she had left her two kids with her husband to be there, ready and waiting, just before eight. And we were joined by Jan Smits, who heads IHG for all of Africa, Middle East, and Asia-Pacific with the exception of Greater China and Taiwan. More coffee flowed (Jan Smits had just arrived from London) and, as if out of a magician’s hat, full-fat yoghurt appeared – there was only low-fat, which I consider tasteless, on the otherwise-excellent buffet, with attendant chef. On my way back home I looked down at the main, two-floor, lobby, where currently the main breakfast is held while the hotel, with the help of local designer Warren Foster Brown (who has done Westin Singapore) finishes redoing its all-day restaurant. It re-opens September but, like a baby expected soon, it is yet to be named. 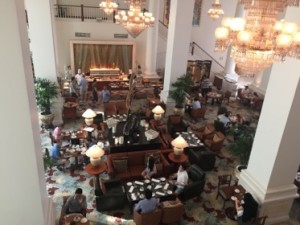 Looking down into the imposing, and busy, lobby

My home, in this well-established luxury hotel, was 401, a just-finished suite – Warren Foster Brown again -formed of one and a half normal-sized rooms. It was absolutely lovely, champagne-coloured walls, mole-coloured curtains that, blissfully, you simply pull across or back without any mind-exercise electronic controls, and silver-blue and mole upholstery. The china had Chinese patterns, and then, of course, I had my coasters.