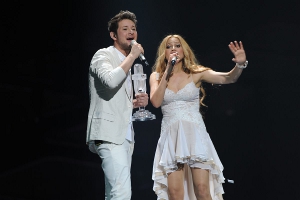 The gal cares passionately about the UK’s Diamond Jubilee. On June 5th, 2012, The Queen will have been on the throne for 60 years and it will be celebrated in right royal fashion in thousands of ways. My neighbouring village back home in England has a street party for 200, young and old.

In London, a flotilla of ships, boats and other waterborne vehicles will carry thousands – including Her Majesty and other members of the Royal Family, up, or is it down, the Thames,  watched by onlookers, live, and by millions on television worldwide.

Other millions, at least 125 million of them, will by then have watched the finals of the 2012 Eurovision Song Contest on May 26th, 2012.  There have been some other great winners, like the Swedish quartet ABBA in 1974 (and we know what that win did for the careers of Benny Andersson, Agnetha Fältskog, Anni-Frid Lyngstad and Björn Ulvaeus – ah ah Mamma Mia!). This year the finals are in Baku, capital of Azerbaijan.  The gal wanted to find out more. Is it true Baku is THE next luxury destination? 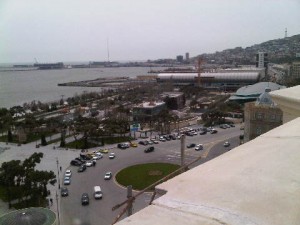 View from Four Seasons Baku rooftop, showing the forthcoming carpet museum (like a rolled carpet) and, by the post at the far left of picture, the venue of Eurovision 2012

Simply put, last year’s winning country hosts this year’s event, which should consist of merely two semi-finals and the grand final.  In fact the event has become so enormous it rivals FIFA or IOC in their organization of global football or global Olympics, respectively.

Long before the 2011 event it turns out that someone – I suspect the brilliant Mehriban Pashayeva Aliyeva, a former eye doctor who is not only married to President Ilhem Aliyev but is also a Member of Parliament – is the visionary who knew that winning Eurovision would put her country on the map.

For 2011, the Azeri entry was sung by Ell & Nikki. Eldar Gasimov was specially paired with Nigar Jamal, who lived in north London and, it is rumoured, at that time spoke no Azeri (she had to learn fast, and she also changed her name as it was thought Nigar did not sound exactly politically correct).

Getting cobblestones in order, down by the Caspian, ready for Eurovision 2012

For the event, on May 14th, 2011 in Dusseldorf, they were dressed by a Swedish designer, they sang Running Scared, specially composed by a Brit, Iain Farguharson, and a couple of Swedes, Sandra Bjurman and Stefan Örn, and they had four Swedes as backup singers.

They won, Azerbaijan went crazy with delight and as it happened a whole spate of new luxury hotels was just about to open in time. These hotels, of course, had been planned long before.  Hotels, like winning Eurovision, do not happen either overnight or by a wave of a Harry Potter wand.  The typical gestation period for a hotel makes an elephant’s reproduction cycle seem like Flopsy Bunny’s.

The queen of the new hotels, Four Seasons Hotel Baku, over which Mrs Aliyeva has perhaps waved her personal wand, will not be open in time for Eurovision, but it will substantially benefit via lateral thought – and I am in for an exclusive hard-hat tour, tomorrow.

Ten-foot walls are being built to 'guard' main roads

But already, in time to host the ‘delegations’ (remember, Eurovision is as tightly organised and over-organised as the aforementioned truly-global bodies), the media and the fans, there are the established and highly respected Hyatt Regency and Park Hyatt and, in alphabetical order, the new boys on the block, Fairmont, Four Seasons, Hilton, Jumeirah, Kempinski, JW Marriott and Park Inn.

It is worth noting that all these hotels were planned before outrageously expensive and time-consuming visa restrictions were slapped on many nationalities, including anyone from the UK and the USA.  Have a Russian or CIS passport, or even a Turkish passport?

Welcome, with open arms.  Coming from GCC? No problem, easy to get a visa. Ah, you are British?  By the time we open our arms for YOU, dear girl, it will have taken a minimum of three weeks and, if you use a visa service to avoid having to wait in line at our esteemed embassy in London, a minimum of two hundred British pounds… 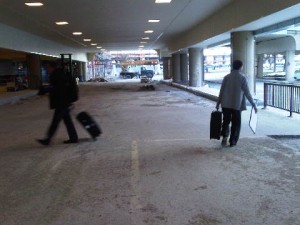 Baku's Heydar Aliyev International Airport did not look welcoming at that hour (the Porsche Rimowa is being carried, on the right)

On arrival, after the excellent Azerbaijan Airlines brand-new A-320 overnight flight from London Heathrow, Baku’s Heydar Aliyev International Airport did not look too auspicious at 0715.  This was obviously a work-in-progress, and I was to see much more of it as a Baki Taxi, one of hundreds of purple London taxis recently imported to Baku, drove to Kempinski Hotel Badamdar, in the Badamdar area a mile up inland from the celebrated Old Town and the Caspian.

Some main roads are being given flanking walls both sides. Ten-foot-high stone guards-of-honour, so to speak, will turn these roads into open-topped tunnels. To get them ready, hordes of healthy men are digging and cutting, tying wayward trees back and wondering what to do about protruding gravestones. 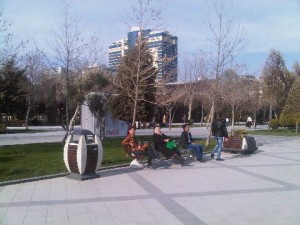 From the boulevard next to the Caspian, you look up to the towering Hilton Baku

At one point, a group of workers broke off for lunch, a barbecue that smelled absolutely divine. At another point on the drive down to the sea, we passed some of the global brand names that are making shopping in Baku a draw for shopaholics from all over this part of the world.

Down at the edge of the Caspian, I looked in vain for sturgeon swimming.  I turned around, to see other guys breaking up stones to perfect the cobbled walkway. Across Boulevard Park, the towering Hilton was a reminder this was going to be an eventful few days.