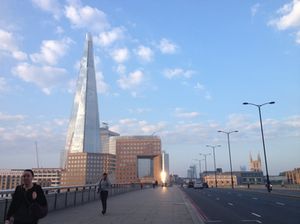 The Shard, taken while running across London Bridge

The Shard towers, if that is the word, high into the sky. OK, says the gal, in Asia it would be nothing but here in Europe, especially London, it stands out as the highest building in the whole of the EU, and it includes the city’s most striking new luxury hotel. The Shard is 310 metres, or 1,016 feet high, and Renzo Piano’s design gave it its name. It has glass panels sticking out at all angles. Renzo Piano is known to despise skyscrapers, but the developer, Irvine Sellar, flew to Berlin to host him to lunch, and Mr P. immediately started drawing sketches on the back of the menu. This, seen here from the adjacent London Bridge, is the result today. 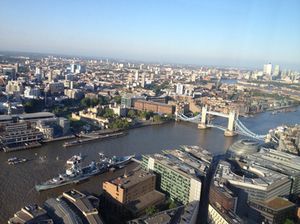 Look down, at HMS Belfast, The Tower of London, and Tower Bridge

The 202-room Shangri-La At The Shard, London, is on floors 34 (banquet rooms) through to 52 (bar and pool, of which more later). Views from all the bedrooms are amazing. From 4903, a corner room, I look down at The Thames, with HMS Belfast. To my left is London Bridge, to my right is Tower Bridge, with, the other side, the tiny-tiny Tower of London. Since I am currently reading a book on the Tudors, and nearly every night Henry VIII sends yet another obstreperous duke or princeling, or yet another wife, on a one-way trip to the Tower, it is amazing to see the Tower now looking like a Lego toy. 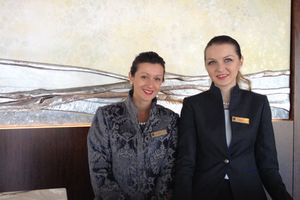 There are so many outstanding features about the hotel, which only had its first guest on May 6th, 2014. I love the uniforms, especially the two-greys coats and matching dresses, with pearls, that some of the ladies wear – all the hiring, by the way, was done through social media, with over 6,000 enquiries for 350 jobs, half going to people who had never worked in a hotel before. Front desk is on the 35th floor, which flows to afternoon tea lounge, sip while you soak up that view, and the all-day Ting (‘living room’) restaurant.   Loved having dinner there, trying chef Emil Minev’s beetroot sampler, a vaguely Japanese presentation, but then he was last cooking in Tokyo. 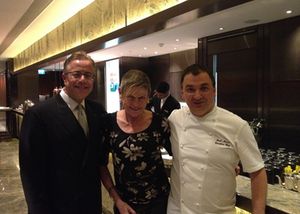 The Crimson Pinot Noir 2012 tasted even better out of the narrow-stemmed glass, which is Riedel. Food-wise, everything is local as possible, with meat, say a 400-gram rib eye which comes on a wooden platter, sourced from nearby Borough Market, a real venue for foodie tourists, by the way. It was an eye-opener to me to discover this part of London. The hotel is directly above London Bridge main-line rail, and underground (tube, subway), one stop to Bank, two stops to Waterloo. Come out of the hotel and walk five minutes to the pier for ferries to Greenwich and the O2, go along the Thames embankment to the Globe for Shakespeare in the round, or the Royal Festival Hall. Shop in Hays Lane, or at Borough Market. 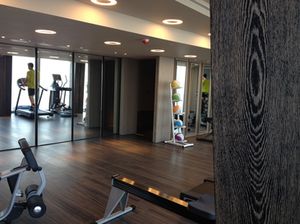 I unofficially ‘launched’ the gym

Hotels rarely open precisely on time. Gong (‘high in the sky’) bar, on the 52nd floor, opened the night after my visit, but I previewed one of its many gins, a locally-distilled Jensen’s Bermondsey Gin, 43% alcohol. Luxury travel tip: make a reservation far ahead if you want a two-hour slot, cocktails in the sky – the bar opened with 3,000 bookings. I was privileged, on my short visit, unofficially to declare the 52nd floor gym open. Run your heart out, with the City of London displayed beneath you, and recover by having a massage in your bedroom. Do as I did, head back down to Ting for Yorkshire Dales bio-yoghurt, specially sourced by the chef, and preserves that French juice king, Alain Milliat, has labeled for the hotel (I told him if he did not, I would go to a competitor, says Emil Minev, with a laugh). 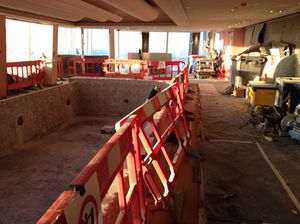 The pool, currently a building site, WILL be lovely…

The swimming pool, also on the 52nd floor, still has a bit of work to be done, as the photo shows. But when it is up and running, Gong will flow over into the pool area, with security, I am told, making sure that no-one who has had a little bit too much from the champagne counter, tries to show off his, or her, back stroke. Another special feature about this luxury hotel is that it is licensed for weddings up here. Hold your nuptials pool side, and the view comes too.