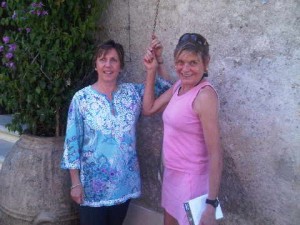 Bianca Sharma is one extraordinary woman, whom the gal adored on first sight. She is the sole owner of Europe’s most extraordinary luxury hotel to open this century, Monastero Santa Rosa – though the saga goes back to the last millennium.

She says, mind you, that she acts on impulse.  Many years ago she met her future husband, Ken Sharma – who later left Texas Instruments to co-found i2 – on March 1st, and they married May 23rd that year.

After his death, she and her two teenage sons were staying in 1999 on the Amalfi coast with longtime friends.  On a boat trip, she looked up at an imposing ruined building, 1,000 ft up a near-vertical cliff, and said she had to buy and restore it. 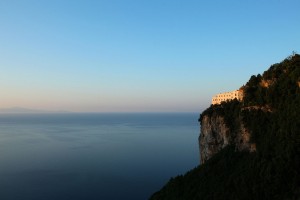 The 20-room luxury resort, in a centuries-old closed convent, is 1,000 ft up a cliff face

She knew from the outset that, with her kids about to leave home, this would now be her next mission. She was introduced to a local architect, Franco di Martino, who confirmed that the ruin was for sale.

It had been a sequestered – closed – convent, and after many empty years had been turned somewhat half-heartedly into a second home.  Bianca Sharma does nothing half-heartedly. She immediately envisioned a 20-room super-luxury hotel that would open in 2002.

That date slipped to 2004, and so on and so on.  The hotel, indeed with 20 rooms, finally opened May 17th, 2012. The first guests just happened to be Prince Albert and Princess Charlene, and that instantly put it on the A-listers’ must-visit agenda. 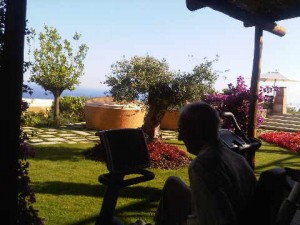 The lowest of the immaculately-tended terraces has an outside gym and, to the right, the sculpted pool ...

Her sons had thought her mad from the outset, Bianca Sharma admits. The elder told her this was a ‘tear down, mom’, which being translated means buy it, raze it, put up something decent. He is now a financial engineer. Her other son, a qualified sommelier, is studying hospitality management at NYU.

She has honestly no idea how much land she has, but behind and above the hotel, the other side of one of the typically narrow Amalfi area roads, she is growing an orchard and a vegetable garden.  In front of the hotel, existing terraces have been spruced up to Chelsea Flower Show perfection. 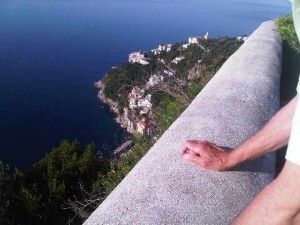 .. look down over that terrace's parapet, to sea-set buildings, so far below

To give an idea of scale, take the steel and glass elevator from the reception area to the lowest level, walk out 30 yards and then down 58 deep steps and you get to the lowest terrace, with grass and flowers and a rock-like infinity pool christened by HSH Princess Charlene, showing her Olympic skills.

Down there too is, magnificently, an outdoor Technogym fitness area – the gardener, incidentally, is also the Pope’s, at his summer residence at Castel Gandolfo.

Di Martino worked on the exterior of the four-floor building and on the inside.  An extra spot of land was rented from the municipality to change the main entrance: now you go in past a small revolving wheel on your right, where food and other parcels were handed in to (and out by) the ‘closed’ nuns inside, and on your left is a small receiving room (now the conciergerie) with a big wall grill, through which families could talk to ‘their’ nuns inside.

Corridors have been left as they were, with straight and wide polished stone floors, painted plaster walls coming up to a barrel ceiling. At a lower floor, near today’s library and bar, are four cubicles with floor drains.  No, this was not a communal latrine.

It was where dead nuns were put for bodily fluids to run out before they were embalmed. A small cubby-hole of a prayer room, which at one time was going to hold a computer, has been left, as if for contemplation. 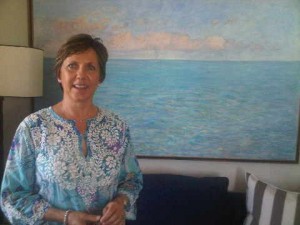 Bianca Sharma commissioned many Paolo Sandulli paintings (and alabaster internally-lit lamps, and stunning bedside reading lights and so much more)

One of the many antiques that Bianca Sharma has found on her retail trips – she is an impulsive shopper, she admits – is a freestanding confessional.  It has been polished and restored, and the hotel’s GM, Flavio Colantuoni, says it has some of the best mobile connectivity in the building (no problem with internet but mobile reception comes and goes).

Giant alabaster lamps, lit from inside, were made to her specs, as were sleek fibre-optic reading lights that are more Bang & Olufsen in simplicity than Philippe Starck.

She has personally slept in all the bedrooms, which are called after local herbs renowned for medicinal purposes.  Salvia, sage, was once three nuns’ cells. Now it is an airy, pale grey space rising through curved walls up to the ceiling.

The polished stone has a light-in-weight rug of patches of blue abstract that complements the teal and eggshell abstract painting, one of many commissioned in 2010 from local artist Paolo Sandulli. Add a coco-de-mer palm, a Samsung flatscreen and a century-old chest holding the minibar and you have the salon.

Go through to the bedroom area, where the base and mattress were made to Sharma-standard in Spoleto.  Go through to the bathroom, where toiletries for the shower are Ortigia, from Sicily – they are also used at Sir Rocco Forte’s Sicilian resort, Verdura, near Sciacca.

The deep tub comes with little faience pots of pomegranate salts from Santa Maria Novella in Florence, who have also made a chocolate-bar shaped perfumed block on a hanger that looks like a white-chocolate treat and has encouraged the occasional bite (surprise! This is in fact the hanger to put outside your door to say Do Not Disturb). 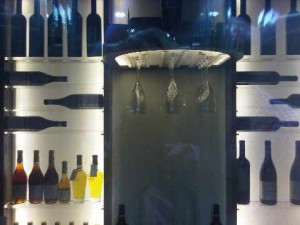 The glass-doored elevator soars down past an artwork of illuminated bottles in the bar.

There are surprises the whole time.  Take the glass-sided elevator down to the lowest level of the building and you pass an artwork that is an illuminated display of bottles in the bar – which also has a considerable, and polysyllabic, hardback library.

Go down by the pool and you get sarongs as well as towels, a continuous mist from a wood arcade behind, and, occasionally, home-made icecream is offered.

What now, Bianca?  She smiles knowingly, the way she must have smiled when her Montessori students asked a very simple question. She loves Amanresorts and also Dunton Hot Springs in Dolores CO.

As it happens she has 270 acres around her home in Durango CO and she wonders if she could put cabins there without it disturbing her privacy (if it did, she could also head for homes in Delaware or South Carolina or go and stay with her sons in New York, or just fly round the world again and again in her Falcon-900EX.

Her hair is cut here in Positano or where her main office is, on Hilton Head, where her snipper is a young 76.  She has clothes and gear around the world but home is where her toiletries are. 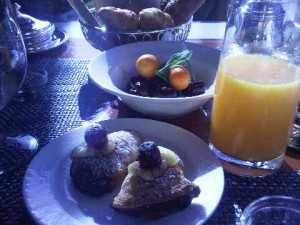 She wants Monastero Santa Rosa guests to give themselves time, to sit back and relax.  Her goal is to have provided a place that brings a refuge in an environment that feels the soul, and the locale – at breakfast on the restaurant terrace, complimentary cherries and kumquat come with a couple of little Sfogliatella Santa Rosa pastries, semi-sweet cream-filled puffs invented by the nuns many years ago. Thank you Bianca, for sharing your passion, but how did you make Monastero Santa Rosa, as a hotel, actually HAPPEN? Read on…