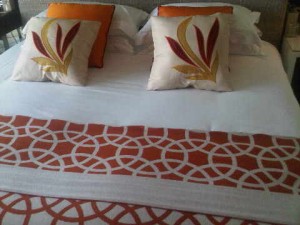 Beds as they are in the daytime say a lot to the gal.  There are beds that make you smile, like those at W Paris Opéra, which have lots of day pillows and one has a printed face of a femme fatale, Toulouse-Lautrec style.

At St Regis Abu Dhabi Saadiyat Island, daytime beds have pillows and a throw that are sand-coloured with the hotel’s Tiffany-colour highlight. At another of the exploding number of new hotels in Abu Dhabi, the Rocco Forte Hotel, beds have daytime pillows that again feature the hotel’s interiors, here sand colour plus the orange and tan of the Empty Quarter and other Arabian deserts. 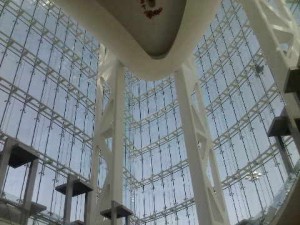 Let us get the negatives over first.  This 281-room Leading hotel cannot offer beaches, or even views of them – you look out at the unique vista of an adjacent KFC one way, a park the other, a football stadium another.

You are not near such recognizable Abu Dhabi features as the Corniche, Grand Canal, or Saadiyat or Yas Islands – but you ARE pretty equidistant from all those.  And you do have a highly distinctive 12-floor shape, recognizable by a flowing different-greens glass shape that is almost Frank Gehry-like (the architect is actually W.S. Atkins).

Inside, the main lobby has elements you see elsewhere, flowing lines indicating waves and sand dunes, but walk back, or rather sideways, to one end of the building and your eyes are drawn upwards.  You are in a rounded-V shape of a glass atrium that soars up through ten floors. 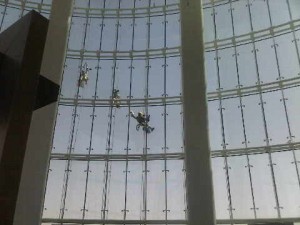 Today the atrium’s windows are swarming with ‘flies’, in reality window cleaners abseiling down the building

The atrium’s south facet, facing the stadium, has its glass panels inset with near-millions of tiny ceramic shapes to diffuse the heat that climbs to well over 50 degrees in the height of summer: the north facet is clear glass. But the entirety needs cleaning, especially after sandstorms.

Yesterday abseilers were at work, scaling up and down the hotel exterior to make it squeaky clean, and providing continuous interest to diners in the all-day restaurant and, when it is open, the Blue Bar that is cantilevered out from the sixth floor lobby. 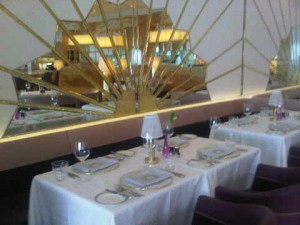 Here colours are stone, with lots of glorious marbles and art and the Czech chandeliers that seem to be de rigueur for anything new in the Gulf.  One of the signature restaurants, which serves Italian food, has been designed by Martin Brudnizki, who worked on Sir Rocco’s Frankfurt hotel, Villa Kennedy, and also did Le Caprice in Taj’s The Pierre in New York.  Here, he has come up with a stunning Art Deco look, which gives Italian cuisine a completely new slant. 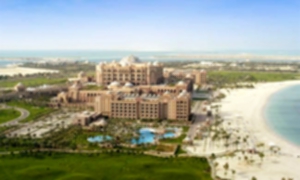 Enough of the new.  There is also the ‘established’ – to call anything ‘old’ in Abu Dhabi is ridiculous.  Emirates Palace by Kempinski has been the icon of the Emirate since it opened April 2005, on 200 acres by the beautiful blue waters of the Arabian Gulf.  It is rumoured to have cost $2.3 billion.

This is the 394-room luxury hotel that is a kilometer long, with 72 killer-type shops,  two spas and two gyms (one each end), and a 1,200-seat auditorium, and a 176-boat marina and such space that some staff must walk about 15 km a day.

This is the place where 2,000 employees are needed to operate, partly because of the sheer size.  I looked down at Emirates Palace from my divine suite at Jumeirah Etihad Towers the other night, and remembered I went to the the Emirates Palace official opening, January 31st, 2005.  Wow, I spent FOUR NIGHTS there (that was the last hotel ever to have put up with me so long).

I recall suite 3406 for its balcony looking out to sea, its heavy shower door, its luxury fittings and Hermès toiletries – at my last visit, December 19th, 2010, the toiletries had switched to Amouage and Lady Primrose.  That was the first luxury hotel to introduce me to Maromas coffee, which I have had several times since – and cannot have enough of it (Maromas is a local brand, blended and ground under the supervision of Dr Massimo Hakin, who founded the company 2005 with Markus Bihler and Dusan Stosic). 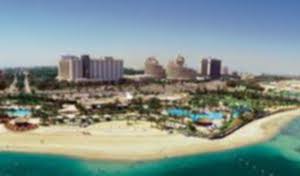 Truthfully, though, there are some veterans on the hotel scene in Abu Dhabi.  The lovely Sheraton, vintage 1979, is the doyenne, and its beach club and its Italian restaurant still pack’em in, day after day.  Hilton Abu Dhabi, a year younger, has since its opening provided a really comfy-luxury base, and its regulars, particularly lots of Americans, love it just because it does not change.

Interestingly its boss today, the jovial Wolfgang Maier, was here just after opening, as a pipsqueak of a young operational controller.  Now he has escaped from Saudi Arabian hotel-keeping to be the big boss.  He runs one of the most successful beach clubs outside of, well, Monte Carlo (though the Monte Carlo Beach Club is a bit of a misnomer as it is in fact a few yards outside the Monegasque border, in France).  Here, the Hilton Beach Club has 2,500 members, who really use the place.

There are acres of beach, pools, plural, and a large Precor gym, and hair dressing, and a laundry shop, and restaurants, with three more restaurants to come.  Our beach, says Wolfgang Maier, even rivals Sandy Lane’s, in Barbados.  Exclusivity is not always new, it is a state of mind, a combination of ambience and people – Maier, by the way, has 630 employees, to staff the 380-room hotel and the demands of the Beach Club.