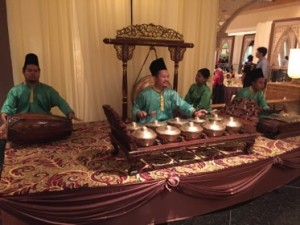 Musicians in the lobby

These are the Gamelan musicians who entertain nightly, during Ramadan, in the lobby of Kuala Lumpur’s most established luxury hotel, Shangri-La. This is, indeed, a pillar of the entire community and its royals: the PR director, Rosemarie Wee, has been here since the 701-room hotel’s opening, in 1985. She is socially in the highest of circles, and has been awarded the Dato title for her success, says the gal, who has known Dato’Rose for 14 years. On July 9th, for instance, the hotel hosted a benefit to present a cheque, the result of its annual Christmas charity drive, to enable kids to have life-saving operations – and guest of honour was the former Queen of Malaysia, Tuanku Hajah Haminah binti Hamidun, the Sultanah of Kedah. 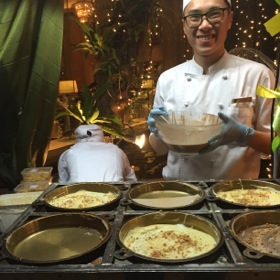 A selection of Iftar pancakes

The role of King of Malaysia, Yang di-Pertuan Agong, rotates every five years between the nine hereditary rulers of states (other states do not participate). There are therefore nine ruling families in the country, which means an awful lot of protocol is involved. Many top people are here tonight, as always during Ramadan, for pre-booked tables at the Iftar break-the-fast buffet. Technically after a day of fasting one is supposed to have a date and a tiny sip of water, repeat the process, eat slowly but apparently some just start gorging, which causes lots of tummy aches. This hotel, says GM Manfred Weber, will do at least 600 Iftar dinners a night, sometimes 750. Tables are crammed in everywhere, including the lobby lounge and an outdoor conservatory. Service has to be buffet, and popular items include both choice of pancakes, and shaved ice. 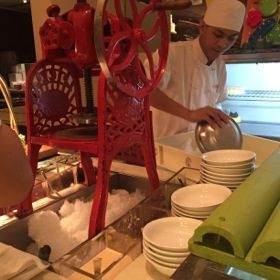 A machine shaves the ice

Shaved ice, with the ice crushed through an old-fashioned grinder, is one of the least calorific of the offerings. As its name implies, ice is shaved, and covered with tastes. It seems to be a Hawaiian specialty, interestingly. The Waiola shaved ice café claims to the Honolulu Star Advertizer’s best 2015 accolade, and the offerings there include mango-topped ice, a mocho bowl with condensed milk and Starbucks, and a green tea ball with more condensed milk. Oh well, I learn something every day and today I say it is not worth another trip to Honolulu simply to learn about condensed milk over shaved ice. But there are other desserts too, masses of cakes and more. Make it sweet and Iftar diners will love it. 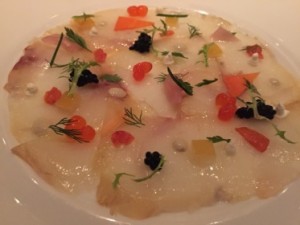 Walking through the coffee shop at Iftar time is akin to trying to find your way through the (real, growing bush) maze in the hotel’s garden. Cleverly, this luxury hotel, by the way, has its Horizon Club lounge on the first floor, 23 carpeted steps up from the lobby. I call in there at cocktail hour to find every one of the 150 seats taken. The hotel is buzzing tonight. I retreat to the calm of Lafite restaurant, where Manfred Weber and I enjoy an elegant and quiet dinner, in my case chef Jean-Philippe Guiard’s slightly smoked monkfish carpaccio followed by an equally delectable gratinated lasagne of mushroom and spinach. Maitre d’ Benjamin Pons poured a glass of Perrier-Jöuet, which I think I deserved after not giving up during a Chinese foot reflexology treatment earlier (anyone with ticklish feet, beware!).