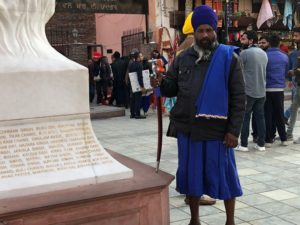 Until a year ago Amritsar, spiritual home of the global Sikh community, had no luxury hotels – there were places that had beds and, particularly in the warmer months, you could sleep outside, under the covered cloisters of one of the courtyards of the giant area that is Sri Harmandir Sahib, also known as the Darbar Sahib or Golden Temple. This absolutely gorgeous temple encompasses a man-made sarovar pool finished by Guru Ram Das in 1577. The whole thing is so religiously charged, says the gal, that anyone going there feels as if the battery has been completely re-charged. Arriving at the complex you have to take off shoes and socks, and later, before entering the inner Golden Temple, no photos allowed, you must have your hair covered. 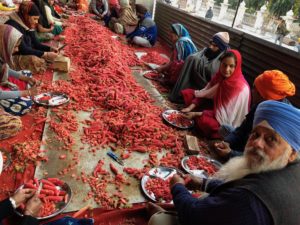 In fact as soon as you get into town you are aware of being in another world, akin to a trance. The streets are so clean that you feel you could eat directly off the ground. There are no official police; they are not needed. The essence of the Sikh religion is to look after others, regardless of race or religion, and holy men wander around, with big staves that fortunately seem to be purely for decorative purposes. Others carry big curved knives, showing they have attained Sikh sanctity. This means neither sex can remove any bodily hair anywhere, they must carry wood combs, eschew alcohol and meat, wear an iron bracelet and long underwear, and men carry swords. At least 65,000 people visit the Golden Temple every day, Sikhs from as far afield as Toronto and Sydney, and non-Sikhs, who must cover their heads. Remarkably, every one can sleep here and eat, any time 24/7. 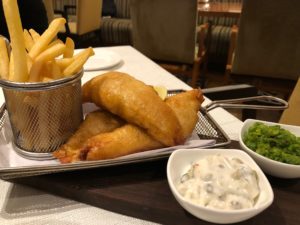 I have been round large and copious catering kitchens before, but nothing to rival this production, all run entirely by volunteers. There are areas for preparing carrots, others for peeling garlic. Vats the size of bathtubs cook rice, vegetables. People are wheeling around giant racks stacked high with metal plates with four compartment, like a TV dinner – you help yourself to a plate, and a spoon, and sit cross-legged anywhere in long lines. Servers walk along with buckets, ladling something out: you get, in lightning time, dal, a vegetable, a runny porridge and a dessert, perhaps cut fruit – a tin mug of water, a bowl of rice and as many chapatis as you want come separately. And imagine the subsequent dishwashing; volunteers, standing at 30-foot troughs, deal with 65,000 sets of utensils, plus cook pots, every day. 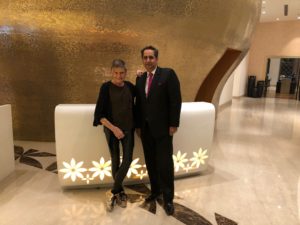 Sumeet Taneja (the wall behind front desk is gold-tiled)

One year ago, however, Amritsar did acquire a luxury hotel, the very agreeable Taj Swarna, run by GM Sumeet Taneja. He has got his food as well organised as the Golden Temple’s, and a lot more varied: you can choose Chinese, which is really popular with Indians, or a sanitised version of Indian street food, the choice of tourists flocking from UK, France and Germany, drawn by the mystique of the Golden Temple. You can also choose one of the Taj international comfort foods, say fish and chips, as on menus at Taj London (my goujons were as tasty as they look here and, a bonus, I did not have to wash my plates). One tip when staying here: plan at least two full days to do justice to other sites as well as the Golden Temple, and ask the really lovely guest services staff, who are not surprisingly praised so often on TripAdvisor, to book freelancer Sahil Singh as your guide. NOW SEE A VIDEO OF MY ROOM