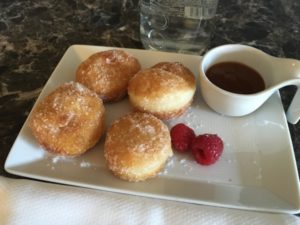 You know you are back in the great US of A when you see a statue of George Washington, as above, and this one happens to be in Boston’s Public Garden (by Thomas Ball, it was dedicated on July 3rd, 1869). You also know if you are back in the USA if you come across doughnuts, as in England, spelled as donuts. Apparently, however you spell them, they are beginning to replace macaroons here (and macaroons, in their turn, caused a downswing in cupcakes). Why on earth, asks the gal, are there sudden crazes for such bad-for-you one-bite sweetnesses? A wedding reception at The Hay-Adams Hotel in Washington DC, the other day, had a whole wall of help-yourself donuts. At the premier luxury hotel on the south side of Public Garden, Four Seasons Boston, it was four small donuts, with a bottle of Evian and two raspberries, that constituted the in-room welcome. 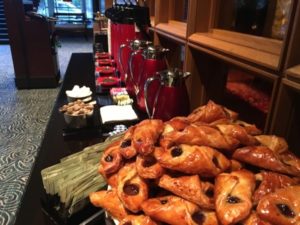 Coffee, tea and pastries for a pre-breakfast snack

Let me look at some of the elements that make the Four Seasons brand what it is, today. A day before arriving I was emailed a pre-arrival check-in facility, which I noted, did what was necessary but, unlike some other brands’ pre-arrival communications, there did not seem to be a choose-your-room capability, but that was just fine. How would I know, before arrival, which room I might like? As it happened I was given one of the new ‘mock-up’ or trial rooms, being redone by BAMO, with more than a little bit of tweaking by the 274-room hotel’s owners. See what my room looked like, in the video below. I loved the bright sparks of sunflower yellow, and the fact that one window opened, not much but enough to let in lots of fresh air. 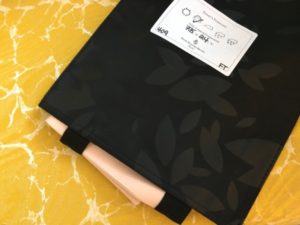 Obviously, being Four Seasons, WiFi was free (unlike some other five-star hotels in Boston). The bed was perfect, as was sound-proofing. Early morning coffee, available in the lobby, was really flavourful, which is rare in pre-made, pump pot brown liquids available in some hotels around the world – and here, generously, there was also a pile of fresh-baked pastries, all for free. There were stacks of serious newspapers, again complimentary, and, much to my surprise, a copy of my favourite Financial Times was, without my asking, hanging outside my door, in a stylish black-damask fabric bag, with today’s weather forecast stuck on it. 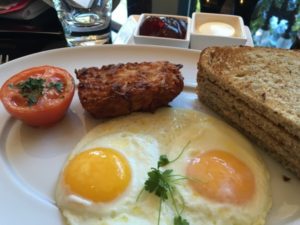 After an early workout, in the 24/7 gym up on the eighth floor rooftop, it was breakfast time. There was no buffet, but I guess that the many bankers and businessmen (said intentionally, there were no other obviously-business women in the Bristol all-day dining) and all the others did not want to leave their suited-but-tieless discussions to go to a table to help themselves. The coffee, in a big shiny Alfi pot, was again full of flavour. And, as always in the USA, the kitchen found it impossible to send out my simple order for eggs without decorating them with hash browns, and tomatoes. There are some national characteristics that international visitors just cannot change, but that is one of the joys of travelling the globe. And now see the video, below.