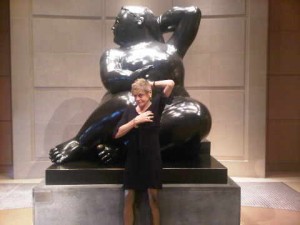 Oh Seated Woman – how the gal loves you.  It was years ago, actually Thursday November 3rd, 2004, when Ignacio Gomez, then boss of then-new 222-room Four Seasons Hotel Miami, introduced us to the sculptures of his fellow Colombian Fernando Botero.

This, his ten-foot typically-anthropomorphic sculpture, sits in pride of place in the seventh floor lobby of this luxury hotel, right on Miami’s Brickell Avenue.  Since then we have spied Botero pieces in Singapore and lots and lots in Cartagena… 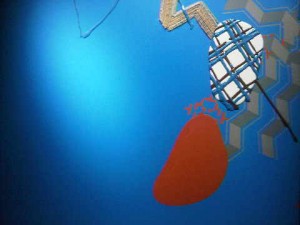 The part-owners of this hotel, Millennium Partners, are Into Art.  They have invested heavily in beautiful pieces in public areas.  By the elevators up to bedrooms is a stunning blue-ground piece by local artist Jacin Giordano (yes, everything is meticulously labeled, as are Millennium’s pieces in another of their hotels, Four Seasons San Francisco).

There is also ‘art’ in the hotel’s gym – if you call banks of jogging machines stretching as far as the eye can see ‘art’.  This gym (an understatement) is one of the Sports Club/LA over-sized facilities that is integral with a hotel.  You find the same in Boston (Ritz-Carlton), San Francisco (Four Seasons) and Washington DC (Ritz-Carlton).  Here the facility has, wait for it, 3,500 outside members.  They come for workouts, not to sit around. They come for beautification and serious yoga and the like. 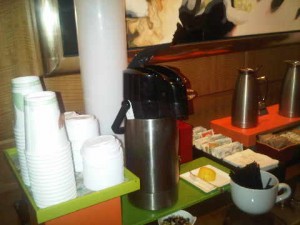 Even the morning coffee-to-go is set against priceless art

Back to the hotel, even when you pick up your complimentary coffee you find the pump pots backed up against some art work or other.  Makes you feel good, early morning.  And things do start early here.  By 0505 (someone is still on Dubai time, perhaps?) there were several beautiful bodies, I guess all from South America, already working out on the gym machines.

Actually it makes one feel so good being here it is just a waste of time lying in bed, even though the bedrooms, all of nine years old, have had a fabulous makeover.  I saw designer Frank Nicholson years ago when he had finished the very traditional Four Seasons Berlin, now Regent, with its artificial antiques and working log fires.  Fast forward.

New-look Nicholson, as shown here, is stone-coloured ruffled carpets, silver or stone walls and wall paper, and the wide windowsills have become proper window seats, with cushions.  Look out to the ocean, and along the causeway to Brickell Key. 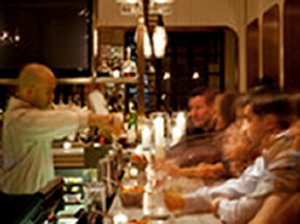 AvroKo-designed EDGE is now the place to be, on the east side of Brickell Avenue

The main botox of the hotel, however, is the transformation of the room that you used to dine in, generally almost alone, into the stunning, oh-so-popular EDGE Steak & Bar.  Four Seasons’ food guru is Guy Rigby, an opera fanatic who made his name when he launched Yew restaurant in Vancouver. 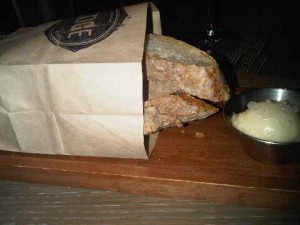 What is now a restaurant that really works has unpolished oak floors, and pale wood and stone-colours throughout. You enter to a horseshoe-shaped bar, with high stools where people sit for a plate of oysters or something. Beer is on tap. Wine pours, especially during happy hour.

Behind this are peripheral, 180-degree stone leather banquettes seating up to four, and the centre of the room has sage fabric seating.  This all flows on to an outdoor terrace, with pull-back roof, and two big fire bowls…  you look right out to the hotel’s pool, the whole thing flows, with a buzz. 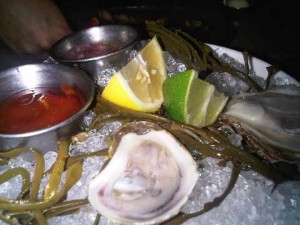 A (paid-for) amuse, a Blue Point and, behind, a Fancy Sweet oyster

An Edge burger, two sizes, is Arkansas beef (Creekstone Farms), Vermont cheese (Cheddar) and chef Aaron Brooks’ own pickles.  He is a lively guy, from Queensland, and he grows his own herbs here, on a terrace garden. 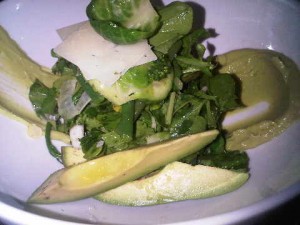 Take his house salad, it is gorgeous, with arugula, cooked and raw veggies, slivers of Manchego cheese and what the menu dares to call ‘the perfect avocado’ (how they achieve that is a miracle).  Then the Infrared grill items, divided into Small cuts, from five ounces, through Medium Cuts to Large cuts, up to a 24-ounce bone-in Tomahawk.

Your chosen steak comes on a white Fontessa plate with a Fontessa steak knife and of course you have chosen house-cut fries, in a metal container with truffle mayo. The vegetable of the day comes American style, namely covered in something (Americans always seem to treble the calorie count of vegetables by adding toppings or sauces…) and jolly good. 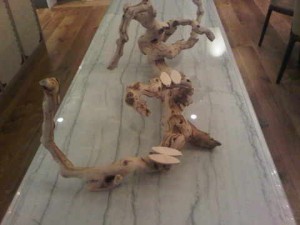 Cleaned-twig sculpture on a table at EDGE

The whole evening was jolly. Even before we started it was a comedy act.  I had been given a lunch menu, he had dinner, and he kept on describing dishes that I could not see.  He, by the way, is a most agreeable companion, Tony Rodriguez, a French-Canadian-Puerto-Rican who was running a health club when Stan Bromley, a legend in not only minutiae but creativity, asked him what car he thought Four Seasons to be… fast forward, again.

Stan is masterminding Meadowood in Napa Valley and Tony is masterminding marketing the hotel, the centre of the burgeoning Brickell Avenue crowd (all this building’s residences are now sold) and also EDGE.

Yes, just as those Czech chandeliers in Jumeirah Etihad Towers in Abu Dhabi have their own IPSs, so EDGE has its own site, its own community.  I actually forgot it was in a hotel.  Which other hotel restaurant dares to display an old twig as ‘art’ (is it, too, worth millions?)?