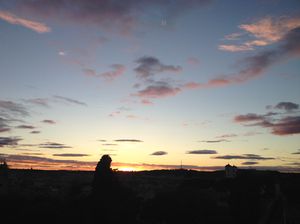 Sunset from The Eden’s rooftop

Back in Rome, the Eternal City. The gal watches the sun set from the rooftop restaurant of the numero-uno luxury hotel near the top of the Spanish Steps, the marvellous Eden, now part of the Dorchester Collection (yes, there is another great hotel up there, InterContinental De La Ville, but there was not time to visit it on this trip). In the last year, lots of money has been spent putting in new draperies and cushions, and considerably updating the gym equipment, but fortunately not too much has changed. At the hotel’s rooftop La Terrazza, its adjacent terrace now looks more like a garden room – very appropriate since, by daylight, you can look from here across to the enormous gardens of Villa Medici. 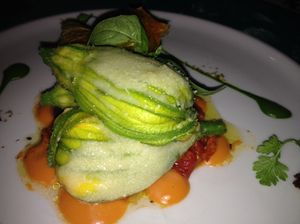 Sommelier Palo De Cicco greets me as an old, meaning time-honoured rather than aged, friend. Look at the menu and my favourite stuffed zucchini flowers are still there, this time filled with ricotta and Taleggio, and with olives and tomato. Before that, however, the kitchen sends out an amuse of salmon sushi wrapped around lobster, and shot glasses of watermelon with gin. Breads, some held in a silver toast rack set on end, include an absolutely stunning crispbread stick studded with anchovy. I realise later I should have had rigatoni alla Norma, the hotel’s signature dish named for Bellini‘s 1831 opera Norma: this pasta, tomato, aubergine, basil and ricotta dish is now available in all Dorchester Collection‘s room service menus, company wide. 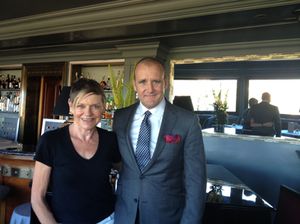 What has changed is that Luca Virgilio is back. He was here a few years ago, numero-due to the hotel’s revered long-time boss, Marcel Levy. Just as good managers often do, Luca Virgilio went off to learn how to be numero-uno, with Baglioni, and along the way he acquired a beautiful American wife and, now, an angelic daughter. From January this year he is back, as General Manager, heading a team that he knows so well – Italian hotel staff simply stay put, it seems. They obviously enjoy looking after those really important people who crave privacy (this is a hotel for the keep it quiet rather than the Kim Kardashians of this funny ole’ world of reality shows and subsequently so-called celebrity). 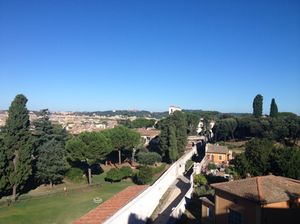 I would definitely choose suite 516 again – it looks out over the gardens Villa Medici, which were transformed last weekend for a thousand-strong wedding joining two Pakistan families. Is a Pakistani wedding like an Indian, I asked, with memories of the white horses and even elephants that luxury hotels have had to provide when hosting, say, a bride from Delhi. No animals were required for this particular celebration, but the hotel’s banquet rooms became full-time beauty parlours. Flexibility is one of the keywords to success in today’s luxury hotel world.