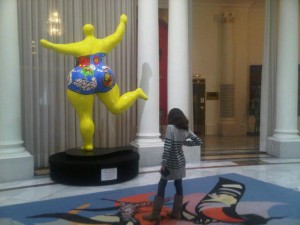 The fat girl twirls, at the Negresco

Even a fat gal dances if she is a Botero sculpture, twirling round in the Negresco’s magnificent glass-domed rear lobby (this area was designed by Gustave Eiffel, he of the tower, and it has 20 pairs of gold-topped white columns around its oval shape).

If Ms Botero can eat, so can any girl, especially one stretched by Foued. We headed for the hotel’s Chantecler restaurant, which has a Michelin star. It is one of only two hotel restaurants where both the chef and the manager are MOFs (Meilleurs Ouvriers de France, top craftsmen).

The other is another Leading hotel,  Le Bristol, Paris.  Here, Jean-Denis Rieubland MOF is chef, and Olivier Novelli MOF is manager. 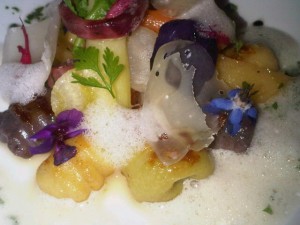 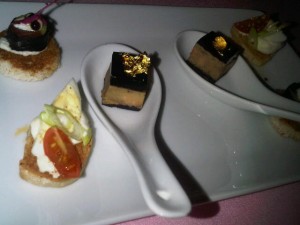 You sit at pink-covered tables surrounded by centuries-old wood panelling and you have so many amuses (little gifts from the chef) you wonder if your ordered meal is ever coming.  We started with half-bites of foie gras, in china spoons, went on to tiny-mouthfuls of jellied artichoke soup, and several other morsels.  My ordered starter, gnocchi, looked like a flower garden.  The vegetables in it came from the chef’s father’s garden. 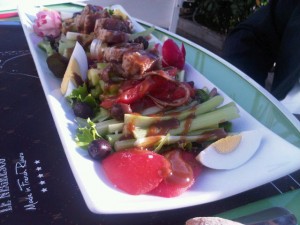 Salace Niçoise at the Negresco 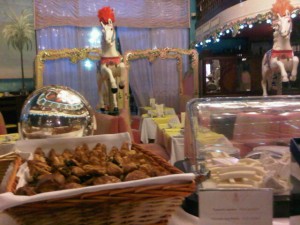 We drank a local red, Domaine St Andrieu 2009 Correns. The breads were baked here and the butter came from Brittany, from Jean-Yves Bordier, to whose mouthwatering butters I had first been introduced in the chef’s kitchen at The Ritz Paris.

But this morning the butter was the universal Président, wrapped in little sachets, put on ice and under a dome. 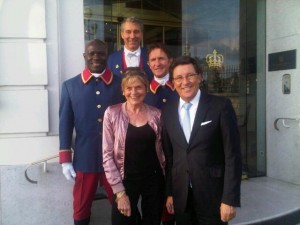 Farewell from GM Pierre Bord and some of his team

Negresco’s second restaurant, Rotonde, is a nickelodeon of circus aspirations, with real-size circus horses (wood) and a mannequin supposedly working a handle-turned organ.  In days past the servers wore circus gear.  Now they wear black, like orchestra conductors.

And several hours later it was lunchtime, outside on the Rotonde’s terrace in the warm December sun.  A Salade Niçoise, here in Nice, seemed in order, and it came, deconstructed and perfect for a working girl who had meetings back to back for the rest of the day, even on a Sunday.

I was waved off by the team, and as I looked back to the rear of the lobby, Ms Botero still twirled, but she had not lost any weight.

Perhaps she too needs a stretch session.