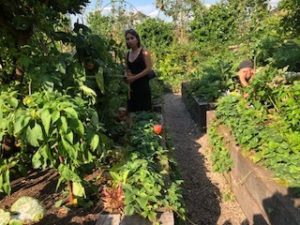 The one-off Ham Yard Hotel, in the centre of London’s Soho, has top, and bottom, unique features.  First, on the rooftop of this five-floor building is a divine terrace, with regular pop-up bars by the world’s top mixologists. Next to it, the gal found a full-scale vegetable garden, groaning with plump scarlet tomatoes and other goodies that will appear on the main menu downstairs.  Next, the basement of the hotel has, in an equally clever way, been given over to events.  There are three adjacent, but unique, meeting rooms.  There is also a 190-seat tiered theatre, extensively used for film premieres (movie companies love this place): it has its own spacious bar. Next to it down here, too, is Croc’s, named for sculptures of three lifesize crocodiles on one wall of the nightclub-dance floor – this too has its own bar, plus a four-lane bowling alley. 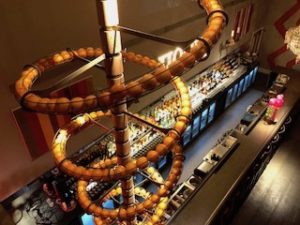 The theatre’s bar, with oranges for fresh juice

Main eating-drinking is in the 160-seat ground-floor restaurant that flows from both the hotel’s reception and its indoor conservatory – and, in summer, the dining area extends outside, on to the courtyard.  From 7 a.m. on it is justly popular (who said hotel restaurants do not work?  Come and see this place – it had 200 reservations for dinner last night and there were also walk-ins). I had two absolutely superb meals here, both at the same inside corner table, sitting on a tomato-coloured tweed banquette (favourite table, apparently, of Craig Markham, one of the founder team members, and Firmdale Hotels’ management never, ever, seems to leave). The crisp linens had been laundered by Firmdale’s own laundry: I had plain white Royal Doulton and, later, whimsical Kit Kemp-for-Wedgwood china, and Peugeot mills – and thoughtful service led by Restaurant Manager Markus Rossmeier, from Munich. 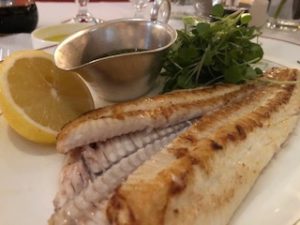 This is a restaurant where food is outlined on a simple card, printed one side, while wines are suggested via a leather-bound folder – for the record, I tried two 2014 reds, a Pax Syrah, The Hermit, North Coast, and To Bring You My Flesh, Dme Ludovic Engevin, Souvignargues, Languedoc (next visit I will try a Ham Yard Tonic cocktail, Portobello Road gin with Campari, St Germain, grapefruit bitters and home-made tonic.  Dinner breads, warm brown or white mini baguettes, were offered from a solid wood tray, with butter and oil.   I started with burrata and grilled fresh peach, with  coppa ham from Beal’s Farm charcuterie in Lewes, Sussex, and basil – see photo, above.  Next came a 12-oz Dover sole (16-oz also available): on or off the bone? The side of courgette frites, rolled in parmesan was so addictive that it alone would be worth crossing London for. 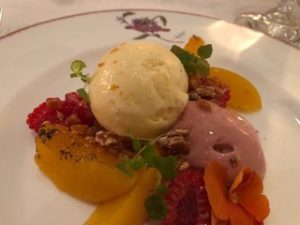 Others would return for the Ham Yard version of peach Melba, a plate with peaches, fresh raspberries, vanilla and raspberry icecream and fine-chopped walnuts. And I would be among those returning, any time, for the hotel’s breakfast, its bijou buffet offering some of the best whole-fat yoghurt in England as well as bowls of papaya, strawberries and more.  From the main course menu, I went for my usual, a plain omelette, with a side of avocado, in a silver dish. The sourdough toast came in a silver rack, with ramekins of butter, paper-capped, and marmalade. Servers kept their voices down (they sensibly did not wear clattering shoes), music was subtle, and there were plenty of newspapers.  On which tack, how lovely to be offered sensible newspapers, including the Financial Times and New York Times, and these are delivered exactly placed, as if by robot, to fit fair-and-square at right angles, outside your door, unlike the haphazard delivery at so many ‘luxury hotels’.  Ham Yard is indeed something special and no wonder so many guests return here again and again. NOW SEE VIDEOS OF THE ROOFTOP VEGETABLE GARDEN, AND BASEMENT CROCS ENTERTAINMENT VENUE