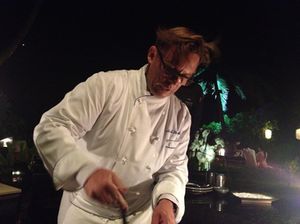 People running luxury hotels who have previously been chefs sometimes hanker after their days in whites, creating things over a hot stove and so on. Mark Hehir, GM of One&Only Reethi Rah in the Maldives, is no exception. His illustrious past, which includes London’s The Dorchester and, among his Hilton stays, Tokyo Hilton, where he met his fabulous wife, Napha. She is, says the gal, busy as a bee here on the island, by the way, setting up a business that will excite luxury hotels, everywhere…. but that night, she was the other happy onlooker and partaker as Chef Mark donned his white jacket, with his name embroidered on, and got ready to take over a hot pad at Tapasake Japanese restaurant. 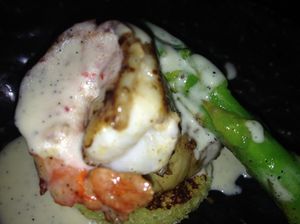 And this is what he cooked for us, Maldivian prawns on top of Rougié foie gras on top of toasted brioche. It was, well, divine, the perfect finale to a moving dinner that started as Dom Pérignon and canapés on the windswept beach of Fanditha, themed for a shipwreck. Stay three times here, by the way, and you get a bottle of DP as welcome (the resort absorbs 90 percent of all of it coming into the Maldives). Then we moved on to the Chef’s Garden, oh what bliss. Mark Hehir has personally turned the working garden, on several levels of earth, into a dining paradise, the trees illuminated professionally, theatre-style. It is healthy, no bread but crudités right from the gardens around you. 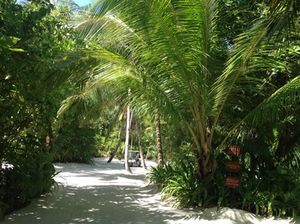 I feel very healthy here. I have my bike, a black cruiser. It has ‘keep to the left’ on the handlebars, which is a good thing as some islands here on the Maldives drive on the right.   As you cruise the beaten-sand roads you see others’ bicycles sticking out of pandan trees and other planted undergrowth around front doors of individual units. It is so well planned that you cannot see into, or out of, any villas’ territory (when I first visited here, before opening, then-GM Michael Luible showed me the overall plan, at a stage where the whole concept was sand, with mature palms being shipped in and tiny seedlings planted to become bushes). I cycle, for hours and hours, past the croquet lawn, which has outdoor bowls – have afternoon tea, here. 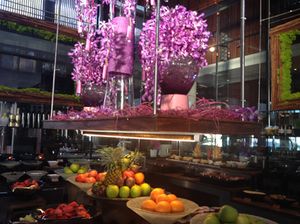 One tiny section of the breakfast buffet

I pass the kids’ club, and the teen centre, and the 27-ft climbing wall that is great for any age – Mark Hehir tells me about the zip-lining overhead adventure trail he is planning now. Some things do not need changing one iota. Take the breakfast buffet, presented in a glass-walled air-conditioned room surrounded by open-sided rooms where delightful breezes keep the Alain Milliat jams cool. Oh that buffet, anything you can think of and more, and gorgeous orchids to keep guard, so to speak, after delicious home-made stuffs, and real breads that any German would commend (the pastry chef, Yves, must, however, be French). 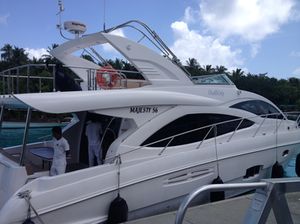 One of the resort’s three Monarchs…

As the world knows, this whole place epitomizes style. Look at this boat, one of three Monarchs. It reminds me of my last private-yacht mini-cruise, in Shanghai. Here the beauty also has two cabins, but mainly it is used for the 50-minute high-speed journey between Male airport and the resort. On the way, sit on taupe leather loungers, watch a really excellent promotional video featuring both James Duigan and his Bodyism and Bastien Gonzalez and his heavenly footcare. Nibble fresh fruit and drink whatever, and, guess what, the WiFi works perfectly. 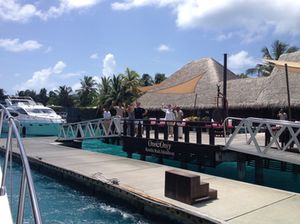 .. and farewell from the gang

Perhaps to make sure that I do, firstly, leave and, secondly, that I do want to come back, the entire top team was there on the dock to say farewell. Mark Hehir has changed, for at least the third time that day and it is still only midday. He made his regular early visit to the gym, in black with day-glo highlights, when it opened properly at seven. He wore a green shirt when doing his every-day patrol of the breakfast, between nine and ten, and now he was in navy polo and white shorts. Memo to self, do pack more clothes when I return…