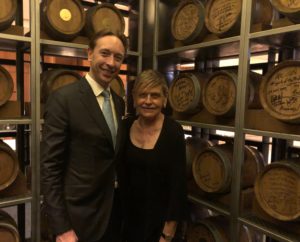 Oscar Postma in the whisky-aging room

The Regent Singapore has been managed by Capella since January 1st, 2019 – conveniently, the brand, like the hotel, is owned by Singapore’s Pontiac Land.  That company is one of the many operations of the Kwee family: they built this, their first hotel, in 1982 and it is still very close to their hearts. Various Kwees use it continually, the gal is told.  The family has seen the 12-floor building change hats on many occasions. It was conceived as Pavilion, opened as Pavilion InterContinental, became Regent in 1988 and thereafter rolled into the Four Seasons family.  It keeps its Regent name and, confusingly, although managed by Capella it is still a franchised Regent, and thus locks into that brand’s owner, IHG.  The livewire GM, Oscar Postma, who has just returned from a global IHG meeting, says he has the best of both worlds, absorbing best practices both from Capella and IHG. 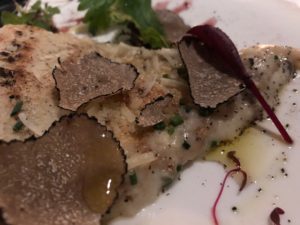 I was in the first of the new-look bedrooms, literally released by designers Unscripted an hour before my arrival (the Singapore-based company is doing all 441 rooms and suites). It was subtly toned but it was the bits and pieces I really liked.  I had a Handy, for instance, that I could take around town and, anywhere anytime, I could call free to ten countries including the UK and USA. But there was little time to enjoy the room, alas, as my diary was just too busy.  The early evening started in Manhattan Bar, an amazing surprise as from the open atrium it does not seem possible to have such a big and active complex resting in the lobby’s void at second floor level.  Here mixologists, who all seem to be trained entertainers, hold court – see the photo above, and the video below.  I was shown two adjacent preparation rooms, one for whisky ageing and one for maturation of additives for cocktails, and an adjacent room that is more speakeasy.  Next I was shown the cheese ageing room, which technically belongs to Basilico restaurant. 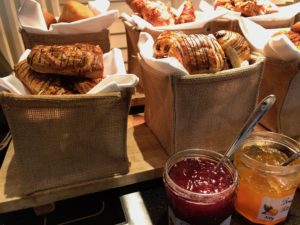 I love Basilico.  It is Angelo Ciccone’s fief and as well as having such one-off cheeses as the truffle-studded soft cheese shown here, he has a world-beating selection of burratas and mozzarellas, as well as lots of olive oils, on the splendid circular buffet in the main restaurant. There was also a display of tomatoes, carefully labelled – I tried baby Marzone, and Marindo, from Sicily, and extra-long Roma tomatoes, presumably, at least originally, from Italy’s capital.This is a chef who really cares about his products: I had a welcome note from him in my room pointing out the recuperative qualities of a couple of antioxidant juices, one orange and one green, and the fact that the fruits came from Yamanashi Prefecture.  On another front, as I drank Primitivo Torrevento from a narrow-stemmed Riedel glass I listened to Oscar Postma talking about luxury.  It is giving people TIME, he said. Basilico certainly follows that – at breakfast I could have been in and out, wham bang, but who wants to hurry when it is Real Italian Food, produced with love.  It really is not surprising that this luxury hotel runs at 85% occupancy year-round, average stay 2.5 nights and, boosted by weekend staycations, 15% of total business is local. Singapore loves Singapore. WANT TO HEAR A MIXOLOGIST AT WORK?