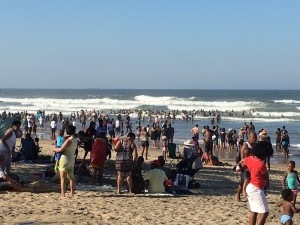 Beaches all over the world come alive at holiday times, as long as the weather allows. This last weekend was a bonanza for luxury hotels near many beaches – see ‘mothers and sons’, above. For Miami Beach, think The Setai. For Montego Bay, the answer is naturally Half Moon Bay. In Byron Bay, north of Sydney, it is The Byron. Durban‘s North Bay is a magnet for holidaymakers from all over eastern South Africa, many of them staying in the extremely agreeable Hilton Durban, a thoughtful hotel that easily, and chameleon-like, switches from corporate during the week (it is right next to the International Convention Centre) to holiday mode, says the gal. See the video, below. 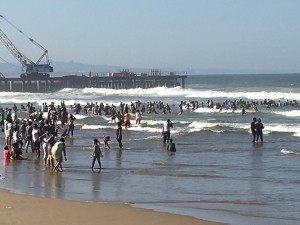 Toes, and more, in the water

From the hotel, it was no more than 15 minutes’ walk along Bram Fischer and K.E. Masinga to the beach. It had been pretty quiet in town. I soon discovered the reason. Even the cars were jam-packed, parking was a nightmare. The sandy beach was hardly visible as every available square metre was taken up by a family group, many of whom had brought gazebos to shelter them from the 30-degree blasting sun. There were lines for everything, to get to the showers after swimming, to buy a doughnut (a DOUGHnut, in this heat?). It was all very relaxed. I was amazed by the number of heavily-veiled women around but Durban’s latest demographics give about 24%, of the total-metropolis count of 3.5 million, to Indians and other Asians. 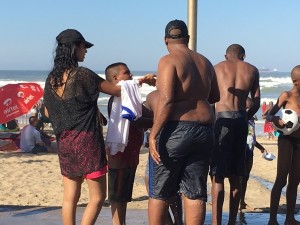 Waiting for a shower

Durban, named for a Cape Colony Governor, Sir Benjamin d’Urban, is a delightful city, with year-round soothing temperatures, and masses of greenery – the rainy period is November through to April. On the way in from the airport you pass many retirement villages, gorgeously set next to the sea and handy for a plethora of golf courses. Durban is rich: AfrAsia Bank says it has 2,700 US dollar millionaires, a number expected to rise to 4,000 by 2025. The money comes from shipping and port activities, from banking, clothing, furniture, pharma and industrial, and tourism. At the moment 90% of tourism is domestic, but this might well change. Until now only Emirates had flown direct into Durban, but now Ethiopian, Qatar Airways and Turkish Airlines have joined them. 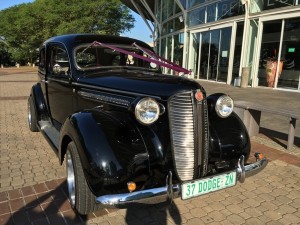 Waiting for a happy couple

With the exchange rate now 15.5 Rand to the US dollar, South Africa is so inexpensive you can scarcely afford to stay home. Another good pointer is that the absolutely ridiculous ruling (not by the Minister of Tourism, incidentally) that any foreign child under 13 has to arrive with two parents and an original birth certificate is, apparently, being relaxed. So life in Durban goes on, which is just great for its remarkably-few luxury hotels – Hilton Durban is the only central one. While 99% of holidaymakers rush to the beach, others head for weddings. This beautiful 1937 Dodge was one of two getaway cars, right next to an Audi 4 with a temporary numberplate for the happy couple, Naresh and Trushanta.