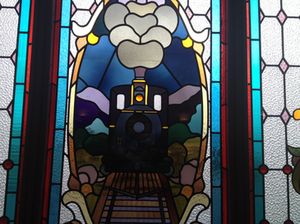 There are lots of ways to travel and in the past many of the best hotels were railway overnighters, or longer.  In Scotland, for instance, both Gleneagles near Auchterarder, and Turnberry in Ayrshire, were railway hotels.  In Canada, the palatial Fairmonts from Vancouver via Alberta’s Banff, Calgary and Jasper, and the Toronto and Montreal hotels east to Quebec and further were in many cases established by Canadian Pacific railways.  Here in New Zealand, the gal got off the luxury cruise ship Silver Shadow to look at a station with a brilliant stained glass train. 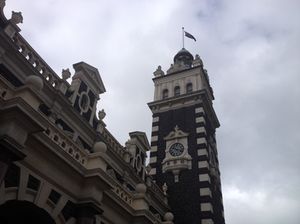 Dunedin Railway Station is apparently the most famous bit of architecture in the whole of New Zealand, and you can see why.  It was built from two kinds of local Otago rock, in Flemish Renaissance style.  The one platform at the back is a whole kilometer long, and the setting for fashion shows during Dunedin fashion weeks – but the platform, and indeed the station as a whole, is regularly used by trains.  You can take scenic Taieri Gorge rail trips from here as far as Palmerston.  Travelling or not, everyone will marvel at the interior of the main building. 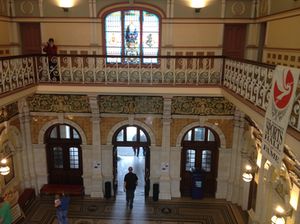 The thousands of tiles that form the two-floor booking hall area are all Royal Doulton. Ground level does today still have a booking office, but it also has a café with internet facilities.  Upstairs is the headquarters of Dunedin Art Society, and you also find the New Zealand Sports Museum.  The railway station has thus become a centre of the town’s activities.  The following day, in Akaroa, I disembarked Silver Shadow yet again, to head to Christchurch, devastated by earthquakes February 2011 that are still causing aftershocks (over 5 on the Richter scale and it is another ‘quake, under 5 and it is an aftershock, and everyone from government to lawyers to insurers to inhabitants has a serious interest in the level of activity). 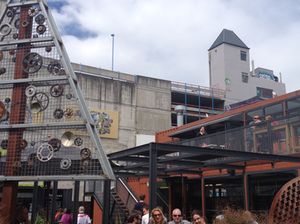 In Christchurch, the centre of day-to-day activities has moved to the new Re:START mall, a brilliant and unique pop-up of brightly-painted containers, sometimes piled two-high, sometimes single storey.  You have banks here – your statement comes through saying BNZ Container – and restaurants and shops, Lululemon and other international as well as local brands.  There are street entertainers, and all this to a backcloth of buildings condemned to be pulled down but that has not yet happened. The shattered cathedral is cordoned off, but a temporary one, half made of white containers, has been funded by Japanese. 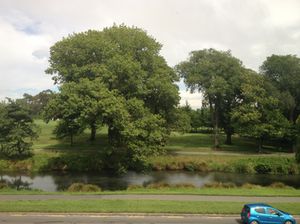 Looking out from room 316, The George

The one luxury hotel in Christchurch, The George, is Japanese owned.  It is absolutely beautiful (room 316 has an all-glass bedroom wall looking into treetops and the salon’s glass wall looks over Park Terrace into Hagley Park opposite). There are alternatives in town, an Ibis and a Novotel, but if you want luxury, The George is the only one.  Take bikes here to cycle the pathways and try not to look at the football field-sized spaces where once stood other hotels, and similarly significant buildings. 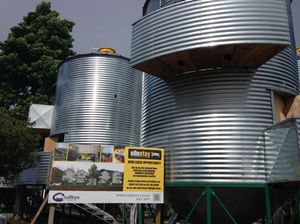 Will this be the world’s first silo hotel?

On the way back down to Akaroa, 70 minutes by twisting road south of Christchurch, I passed one of the most unusual hotels, a Silo Hotel being constructed out of, well, four unused grain silos.  Each will make two, two-floor suites.  How the beds will fit in has yet to be seen.  And then it was back to Akaroa (the port for Christchurch since the earthquake) and embarkation, once again, to my temporary home, the luxury Silver Shadow cruise ship.