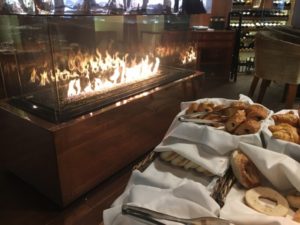 Café Boulud has freshest artisan products, and a glass-sided fire

There are a few other hotels that make a song and dance about their ducks – Peabody hotels immediately spring to mind. But the luxury Ritz-Carlton Hotel Montreal is unique. Every summer a succession of little ducklings arrives, has a good time in the hotel’s garden pond and duck house, and after six weeks, when they have grown considerably, they move on, and new little fluffy ducklings appear, says the gal.   Sit outside, on Maison Boulud’s terrace, and watch the entertainment (see the video below). Year-round, there are many indoor areas of the restaurant, which has a centrally-placed glass-sided fireplace. Somehow even in the height of summer this feels especially welcoming. 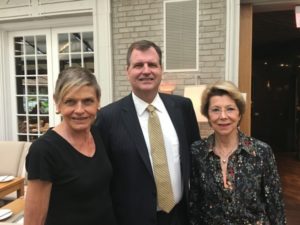 Once again the Boulud name works magic – almost as if wherever Daniel Boulud waves his culinary wand it will work wonders. I love Bar Bouluds at Mandarin Oriental Boston and Mandarin Oriental London (it was there that Marco Torriani, who heads TM Hoteliers, managers of this Ritz-Carlton, first came across Daniel Boulud, hence his presence here). The Torriani family is just as hands-on here in Montreal as it was previously in Geneva, where many who worked under Marco Torriani at Hotel du Rhône, later Mandarin Oriental Geneva, credited him with strategy, and his wife Geneviève with attention to detail. Between them they were always coming up with ideas: it was she, for instance, who designed stunning silver-grey silk jackets for front desk ladies at that hotel, while it was he who brought in Buz to design the new rooftop suites. 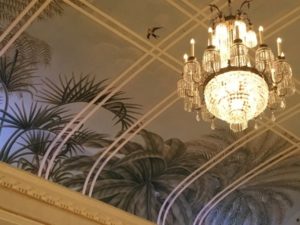 The stylish ceiling of the lobby lounge

Here in Montreal the Torriani family has, with the help once again of Buz, lovingly restored and extended what was the first-ever Ritz-Carlton, put up by César Ritz and run by the Carlton Hotel Group. Now, as a franchised Ritz-Carlton, it is incredibly useful to the main brand, and it leads Montreal’s figures, in occupancy and rates, by far (it also happens to be TripAdvisor’s best hotel in town, which is doubly hard for a luxury-level property). Andrew Torriani, one of the five Torriani children, is GM, and gosh is he perceptive – perhaps years in HR for Air Canada taught him something. The original lobby lounge, which is booked out for afternoon tea many days ahead, may soon have an additional food counter, and expect it to be stylish (talking about style, newly-introduced bed-time turndown gifts are bespoke toiletries, say foaming honey and rose bath powder, from Lucia, of Pure Living, specially for Ritz-Carlton Montreal). 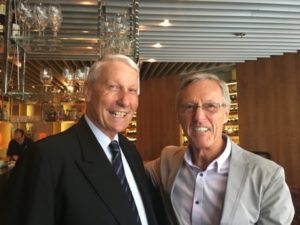 Yes, there are always new things happening in this luxury hotel, and the entire Torriani family is invariably up to something. Already this hotel is a magnet for discerning locals. I happened to coincide with former COO of COMO Hotels and Resorts, Kuno Fasel (uncle of Roland Fasel, MD of The Dorchester). Kuno Fasel has now retired back to Montreal, which he uses as a base for his beloved hiking, but today he was having a quick meeting before a gathering in town of a group of local Swiss. Of course he needed a coffee first, and of course that coffee would be at Ritz-Carlton Montreal, and of course he ran into one of the Torriani family. They chatted away so fast, in Swiss-German, that there was no time to say hello to the ducks – but DO WATCH THE VIDEO, BELOW