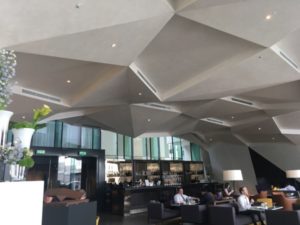 Why does the gal love life so much? One of a myriad of reasons is that it is full of continual surprises. Take The Marker Hotel Bar Brasserie in Dublin, shown above. It is at the end of the Grand Canal Dock, by the last, or first, of the cast-iron mile markers along the 82-miles of the Grand Canal, connecting Dublin with the River Shannon. Started in 1756, it was last used in 1960. Today its Dublin end is a thriving modern area of town, with the Convention Centre, the International Financial Services, and the 2,100-seat Bord Gais Energy Theatre, seen to the left in the top photo (the next big show at the theatre is Grease, which runs August 1-12, 2017). Outside, the eight-floor building’s Portuguese architect, Manuel Mateus Aires, has made it into a chequerboard. Go in, and local designers McCauley Daye O’Connell Architects give the lobby, left, an origami feel. 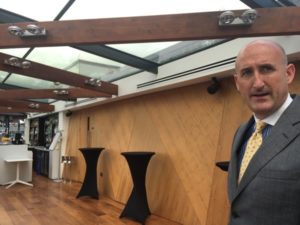 Charlie Sheil, GM of this 187-room beauty, has been here since long before its opening in April 2013. I am sure it is he who envisaged the lobby as a general meeting place. Here, mid-morning, you see aircraft-leasing business people and counterparts in the financial sector sitting hot-officing, using the hotel lobby as if it were WeWork shared office networking, at your beck and call for the price of a(n excellent) cup of coffee. The lobby has comfortable leather chairs, and also a long communal table with plenty of sockets, and of course WiFi is free, and good. I like the way the concierge desk is set off to one side, by the entrance to the Brasserie that is a continuation of the lobby: this way you do not miss him, the concierge, and his presence probably guides more business into the Brasserie rather than going outside. 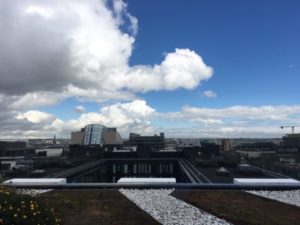 The Brasserie does sound rather enticing – it has a special Bubbleclaws offer, in partnership with fisherman Stephen McHales, pay €120 and two of you get lobster and a 750m bottle of chilled Ayala. Dine early, and the two-course pre-theatre menu, with choices, is €28 (you might have a Summer salad and then organic salmon which, taken off the à la carte menu, comes to €36).   Coming back from the Brasserie, by the way, there is, day-long, a  plenty of bottles of mineral water, with handy towels, ready for post-workouts for those running along the canal or round town. Interestingly these recuperative offerings are placed in front of reception, where I was greeted by a woman I thought to be an out-of-work model but she turns out to be an extremely busy professional as, away from work, she practises daily as she is in Ireland’s women’s rugby team. 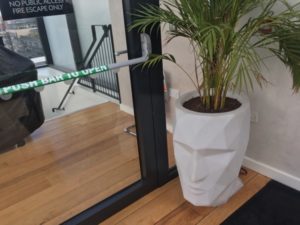 What happens when she is bruised? They put her back of house, she laughs. Everyone laughs, here. Charlie Sheil takes me up to the rooftop. Little did the hotel’s Irish-American and Swiss owners, working as Brehon Capital Partners, realise that The Marker’s rooftop space would become a hot spot for events. Up here, look around 360°, to the Aviva Stadium, and the Irish Sea, and, look straight down, to the thriving Grand Canal Square area. During the week, says Charlie Sheil, this is business-business and at weekends it is events, and shows. Brehon Capital Partners, and Interstate, which manages the hotel, must be delighted. And Charlie Sheil is laughing.