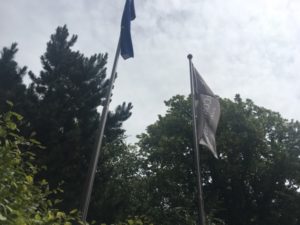 The InterContinental flag now flies over this estate

Every luxury hotel the world over seems to be upping its gin stakes. The gal was tremendously impressed by the gin passport at the Old Government House (OGH) hotel on the beautiful island of Guernsey, and now, here in Ireland’s capital, InterContinental Dublin has two more variants on gin promotion: afternoon tea with gin, Gin & Tea (see above), and a Gintastic package – two of you are welcomed with a bottle, not of gin but Valdo Oro Prosecco, funnily enough, and you are upgraded to a suite, with full Irish breakfast the following morning. Another flag flew over this hotel when it opened in 2001. In those days it had 260 rooms, and some memorable J. Seward Johnson lifesize people-sculptures dotted around its grounds. 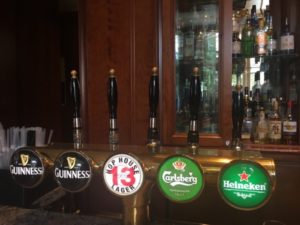 Not only gin in the bar…

Now the hotel is owned and managed, as a franchise, by MHL Collection, led by Paul Higgins and John Lally: today it is down to 197 hotel rooms, with 24 owned apartments whose lucky residents have full hotel privileges. This is honestly like a resort, right next to Ballsbridge’s Royal Dublin Society RDS grounds, home of such mega events as the annual Horse Show, which this year runs August 9-13, plus more niched happenings, say a great sewing bee coming up this November (why sewing bee? the term seems to refer to groups of women sitting round in a circle chatting as they furiously mended their menfolk’s holed socks and turned shirts’ worn collars inside out, and the term was mostly used immediately after WWII when life was hard). 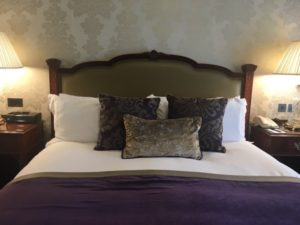 Rooms have lots of regal purple

From necessity of make-and-mend to healthy living with a bit of pampering. Girlie-weekends attract mothers and daughters, and groups of girlfriends. They might well go for snacks and meals in the casual Lobby Lounge – the menu is hilarious. At breakfast you can choose mixed berry, apple and granola muesli with low-fat yoghurt, banana and pomegranate essence. At lunch and dinner you are invited to be saint or sinner: I chose the former, which included a good health salad composed of beetroot, rocket leaves, chickpeas, feta and shaved red cabbage. For the pampering, ESPA choices include easily-understood age-defier, and intriguing ‘lifestage’, facials, probably both jolly well needed after spending far too much in Grafton Street stores, a short ride away. 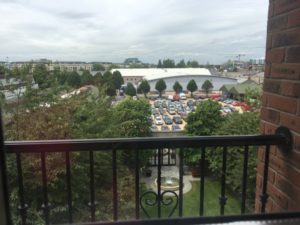 Look out over RDS

But there are other reasons to consider this comfortable luxury hotel (I love the purple accents in the interiors, a royal colour and apparently  beloved of the owners). Ballsbridge is home to dozens of new-age food stores and bars, all within a few minutes’ walk. The extensive grounds of the hotel also seem to make it an ideal venue for weddings and, indeed, this business has been built up extensively over the last year or so. Why bother to get hitched in some historic castle miles from anywhere where you can do it all right here, in gorgeous gardens that are only a few minutes from the centre of the city? Add on a Gin&Tea and an overnight package and you are well away.