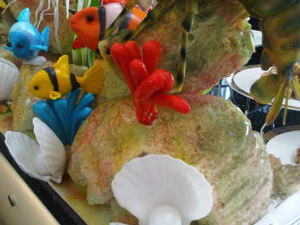 Dubai is HOT (these super little things are painted sugar, at Shangri-La Dubai

Dubai is opposite of cool right now.  It is hot, baking, sweltering – and summer is not even here.  The gal looked out of her window at The Palace Old Town and saw a few slowly-slowly putting one foot in front of the other as they attempted to run round the track on an island that juts out into one part of Burj Khalifa Lake – but then she herself gave up, and resorted to the gym.

After yesterday’s really worthwhile Arabian Travel Market ATM/UNWTO round table, today it was back, again, to ATM. Fortunately the many halls of the exhibition centre were delightfully cool.

This is where the annual ATM is being held, and it puts every other giant travel show venue to shame (yes, Berlin ITB, yes London WTM, come and see how thoughtful and civilized THIS venue is).

First, you punch your accreditization number into a wall monitor and your entry badge pops out, right by a young lady who puts it into a plastic hanging pouch for you. Then you enter, to find halls are colour-coded by carpet.  Green is where most of the hotel companies are.

There are massive two-floor stands for the biggies, Carlson Rezidor, Hilton, IHG, Marriott, and Starwood. There are newcomers, Archipelago Hotels & Resorts, Paramount Hotels & Resorts and Katara. Who on earth are Katara?

Katara is the new name, as of 48 hours ago, of Qatar National Hotels.  Katara has an amazing two-floor stand, with some of the hotels it owns squashed in downstairs – hotels like Ritz-Carlton Doha, for instance.  Upstairs, the invited, by an elegant Palestinian woman in a chic, short, black and beige horizontally-striped dress, are ushered in to a majid Middle Eastern sitting area.

The CEO of Katara, Hamad Al Mulla, comes in a pristine, wrinkle-free full length white thawb and leans back on a low sofa and talks.  We will be the best, as well as the biggest, luxury hotel company in four years at most, he says, smiling.  When he gets up there is still not even a minute wrinkle in the thawb – how do they do it? 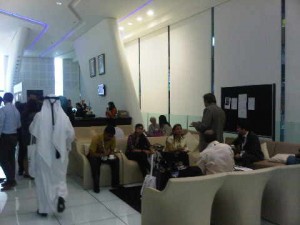 Thanks to Katara, media at ATM have a really pleasant work environment…

SOMEONE has been extremely clever in advising Katara how to make an impact.  There are giant hoardings outside the entrances to the entire exhibition announcing Katara – we are the old, refreshed we are the new, imagined.

There is a media centre that puts every other press centre to shame.  Last time I treked all the way to London’s World Travel Market WTM, way out of town at Excel, the press centre was so crowded there was nowhere to sit down and if you did find a glass it was a cheap plastic cup.

I have similarly given up on Berlin’s ITB press centre, which admittedly has plenty of space but is so far away geographically from Hall 9, where all the hotel groups are.  By contrast here the Media Centre is at floor level, in the centre of the whole event.

You reach it by a two-minute outdoor walkway, which gives smokers the chance to linger for a puff.  Inside, it is spacious and light and cool, with masses of the needed electric sockets and work stations, with laptops and printers. There are two service stations, with day-long foods and drinks, and real glasses. 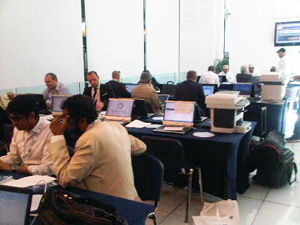 .. with ample workspace and connectivity facilities (so not surprisingly they are going to think well of Katara)

After shaking lots of hands and hearing lots of updates on the dual worlds of luxury hotels and luxury travel, it is time for food.  I head over to Shangri-La Dubai, one of the most comfortable of the luxury hotels along Sheikh Zayed Road.  It is 12 years old this year, but it looks after itself well.

With the help of food specialist Eric Mommejac the lobby-floor buffet has been upgraded to such an extent that not surprisingly nearly every table is taken, by local top executives.  There is a Japanese chef making sashimi and sushi on demand (I think back to my sashimi lesson in Tokyo…). 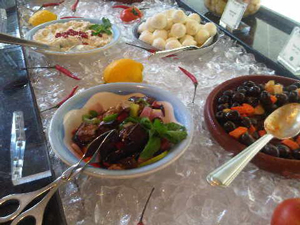 There are yards of displays of Middle Eastern mezze (I think pomegranate-studded moutabel eggplant dip would be one of my Last Supper dishes). There is a separate dessert spread, one side the local over-sweet baklava and the like, the other Western goodies (I think I will forgo this table).  Some jokers in the kitchen have had great fun creating a veritable aquarium of fish shapes, all formed of coloured sugar.

Conversation is discreet, business-like, got to get that deal done in a hurry.  Sitting with hotel GM Bernhard Haechler, we are talking about Wembley Stadium and the London Olympics when there is a yell from On High (the lobby is an open atrium going up four floors). 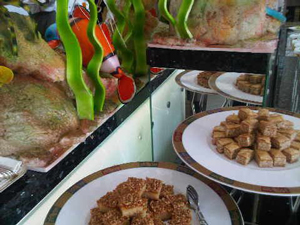 Someone up on the fourth floor terrace screams something unintelligible. A waiter comes over to say quietly it is Argentina’s finest footballer of all time, the ongoing joker Diego Maradona.  He stays here whenever he is in town – he coaches Dubai’s Al Wasi Football Club, ‘the cheetahs’, which is no joke (he is reputed to be paid 3.5 million euros a year plus the use of a private jet).

Led by its Commercial Director Zayed Abbass and Club owner Ahmed Bin Rashed, Al Wasi signed a partnership a year ago with global branding specialists IMG, and already it has gained Hublot Swiss watches as a sponsor.

I look at my own Longines, and realise time has passed.  I head off to Abu Dhabi for the next instalment of this peripatetic world guide to luxury travel.