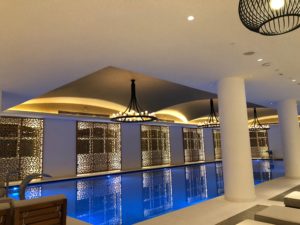 Staying in any hotel just before official opening can be hit or miss – the gal remembers several of the latter, which in all fairness should not be mentioned by name. Emerald Palace Kempinski Dubai on the other hand, was, apart from some of its restaurants and the spa, all ready to go. There were a few other people staying in the 390-room extravaganza, so the gal did not feel lonely – and there was too much to see and experience in this Palace That Nver built. Look at it from the rear, garden, view above (the resort covers just under nine hectares on The Palm).  And the interior is opulent and sumptuous. 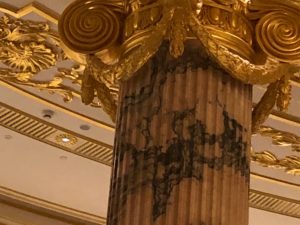 One week later, on the day of opening, a Middle Eastern royal was being driven by.  Stop, let me go and have a look at it, he said.  He so loved the interiors, with soaring columns of pink Portuguese rosa portugala marble and what seems like acres of gold leaf, that on the spot he booked the Presidential Suite, which costs just into five figures, US dollars, a night, plus four other rooms for good measure.  This is a seven-floor palace that has, admittedly, been some time in the making.  Think how long it took, for instance, to hang over 6,000 priceless Italian chandeliers. I actually had two in my room, or rather giant suite #504, looking out over the Gulf – see a video below. 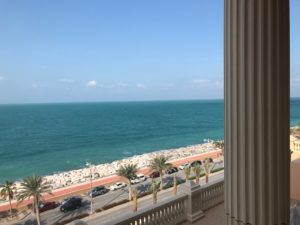 It would be tempting to spend a lot of time in the suites. Room service, even before opening, was outstanding, with exact presentation on the hotel’s bespoke gold-edged Villeroy & Boch china (for the record, cutlery is Sambonnet, most glassware is Schott Zwiesel and, at breakfast, toast comes in a shiny silver rack with Beurre Echiré butter, and Francis Miot jams). Nothing but the best here – hence the imminent arrival, on December 15th, 2018, of miX by Alain Ducasse, an unheard-of three-floor rooftop restaurant with lots of different areas, including outdoor terrace dining.  Ducasse, it seems, has been chosen by this extraordinary hotel’s owner, who has personally been architect and interior designer. 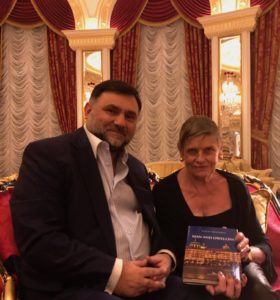 And who IS the owner? Nver Mkhitaryan is a global polymath, author of Man and Dwelling.  He is Baron of Castle Stewart, Wigtown, in Scotland.  He is an avid collector, say of antique firearms, of which apparently he has over 300. He loves Bluthner grand pianos, and ordered a white one to go into the semi-circular lobby lounge, called The Bluthner Hall, where every evening at seven a butler and one of Kempinki’s Ladies in Red, both clad in Versailles style, perform a near-professional minuet (see another video, below). Judging by the calibre of the 23-room Cinq Mondes spa and its approach corridors, and the indoor pool and the 24/7 Technogym, he is also a fitness guru.  And he has, by the way, built a really memorable luxury hotel. SEE VIDEOS OF THE LOBBY, SUITE 504, AND THE NIGHTLY 7 O’CLOCK MINUET