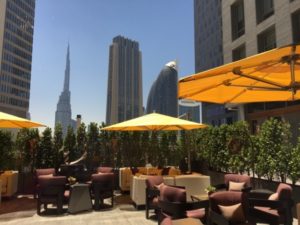 One of the many terraces (Burj Khalifa in the distance)

A hotel in Melbourne was one of the first to make waves, excuse the pun, by having a glass-sided pool, but it was only partially glassed: The Adelphi’s rooftop lap pool cantilevers out over Flinders Lane and that extending part is glassed, and way back in 1993 it was a revelation. Then there was a glass-ended pool at InterContinental Dubai Festival City but now, also in that Emirate, Four Seasons Hotel Dubai International Financial Centre – fortunately shortened to Four Seasons IFC – has gone one further. Look, above, at the pool. This luxury 106-room hotel opened this March and already it is going gang-busters. Business people have found it, and not only for its location, and, says the gal, leisure travellers love so much about it. Site on one of its many terraces for strategic views, say of Burj Khalifa. 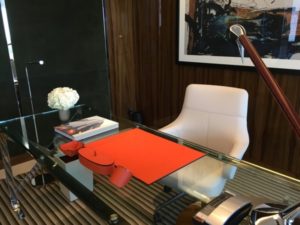 Adam Thany has designed the whole thing, and he has had a lot of fun. He was given an unfinished nine- floor shell, intended originally to be offices and residences but somehow it has turned into a hotel, conveniently with entrances directly to the Financial Centre. I found the starter rooms very pleasant, and I loved the 650 sq ft Studio Suites. Rooms can be combined to give a Presidential Suite that is over 5,000 sq feet, with four bedrooms maximum, but you can be more intimate. Say you only want one bedroom and a big sitting room, fine, but it does come with an office alcove – look at its Hermès-orange desk ‘furniture’, as the term goes. 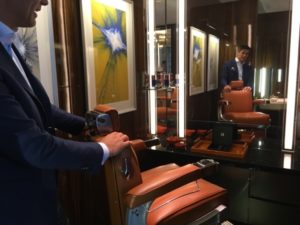 Barber’s chair in the Presidential Suite

There are so many touch points here. The master bedroom is deliberately aimed at the male guest – the bathroom has a real, working barber’s chair, explained by the hotel’s GM, Carlo Stragiotto, a Venetian who came to Dubai from Four Seasons Milano. But there are so many memorable features about the whole hotel. The main reception lobby is quite compact, but leading off it is a space, Monogram, that can become VIP welcome, a small meeting or event space, or, with its full Miele working show kitchen, it can do dinners. It also has its own terrace, and a street entrance too. This is one of the cleverest innovations I have seen for a long time. 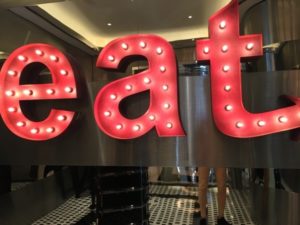 The restaurant is a real American diner

There are several bars (one called Churchill) and lounges, but there is only one restaurant per se and, guess what, it is a real American Diner, called Firebird by Michael Mina, the heart-throb chef making his first sortie out of the USA. It has a black and white tiled floor, red banquettes, and a working jukebox, and bent parts of cars, one gold, one red, one silver, protruding from one wall. Hamburgers are top priority here, as are sundaes and milkshakes, and instead of a glass of the house Veuve-Clicquot try an American Moth Jack, namely Bourbon with peach and lemon juices and ginger beer – of course traditionalists could choose a glass, instead, of Jim Clendenen’s Au Bon Climat Pinot Noir 2014. Really, this does show that Four Seasons is taking the concept of luxury hotels out of the ordinary.  AND NOW, TOUR MONOGRAM, IN THE VIDEO BELOW