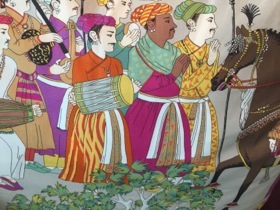 How does one integrate a new luxury hotel into an already crowded market? That was a challenge facing GM Jason Harding when he arrived at Taj Dubai August 2014 – although, to be fair, he had only moved across town as he had been in Dubai for nearly ten years. That gives him a considerable advantage in that he has the key local relationships that take ages for newcomers to nurture. It also helped, says the gal, that the brand ‘Taj’ was known, too, although in fact the former Taj Palace hotel exited the Taj system on May 31st, 2015. 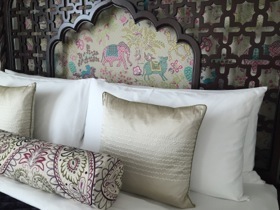 The 296-room hotel, within a stone’s throw of Burj Khalifa, opened March this year, with a splendid party that brought in Taj boss Rakesh Sarna plus important accounts both in India and UAE. Having a Taj hotel here in Dubai is a great boon to Indian business trade with the UAE, says Jason Harding. The interior design of the 35-floor steel and glass building is deliberately geared towards modern India and the world, with hints of Arabia. 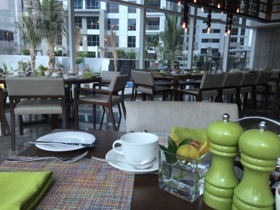 MKV, who did Schweizerhof in Berne, has gone for grey and white interiors, with lots of marble. Suite 3301 has at least one wall showing brightly-oloured Indian warriors, who also appear on fabric cushions. The outline-only fourpost bed is surrounded by purple and apple green upholstery. Cleverly, apple green is also a highlight of the all-day Tesoro restaurant, which is rather like a conservatory looking out over the upper of the two-tier pool area. Love the apple-green napkins and salts and peppers! 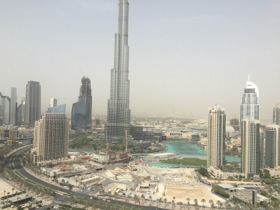 View over to (the lower part of) Burj Khalifa

Sadly, there was no time to try Bombay Brasserie, which I love both in London and in Taj Cape Town. There is also a gastro pub, the Eloquent Elephant, which I am sure is another feature that will make this luxury hotel stand out. My lasting memories include a Lasvit cascade chandelier in the lobby – at least 30-feet high, it shows birds fluttering around. And of course I do not forget the people, like the 24th floor club lounge’s Indian lady who remembered me from Bangalore and her male colleague, from Serbia, who told me how thrilled he is that his wife is working here too.