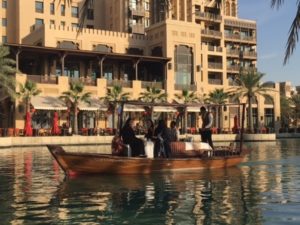 An abra sails past Mina A’Salam

Yoga on the beach at Madinat Jumeirah, with Pierchic over-water restaurant and the iconic Burj Al Arab in the background, is a refreshing and invigorating break from doing the rounds of the growing, seemingly endless, portfolio of Dubai’s luxury hotels, says the gal. In all, Madinat Jumeirah has 78 acres, with 5,000 palm trees, two miles of canals – on which electric abra boats silently transfer people from one of the currently-three resorts to another part of the entire complex. Right now there are 886 rooms in all, with just under 3,000 employees. This is a mighty operation and yet it works, magnificently. 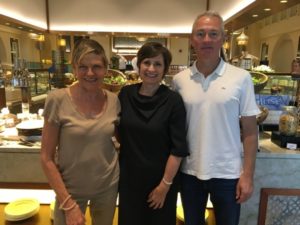 Margaret Paul, from Scotland, is GM of Madinat Jumeirah, which also includes 40 restaurants and bars (hotel guests can easily wander into the neighbouring Soukh Madinat Jumeirah shopping mall, which has a further ten places to eat and drink). Sometime within the next six month Margaret Paul will also open the last stage of Madinat Jumeirah, Jumeirah Al Naseem, a somewhat edgy 430-room resort, between the main Madinat and the causeway to Burj Al Arab. GM of Jumeirah Al Naseem, Richard Alexander, was a long-time Jumeirah man who has returned after a sabbatical at another hotel group. Now he is back, and judging by his enthusiasm at breakfast he is all ready to go. 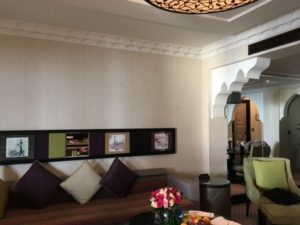 Room 510 has been brightened and lightened

A lot has been done at Madinat Jumeirah’s Mina A’Salam resort since I last stayed there, coincidentally also in 510, conveniently near the elevators. I do not remember, before, having a good library in the fifth floor corridor, of left-behind books, mostly in German. I do know that 510’s woodwork, previously dark, and somewhat overpowering, has now been lightened and brightened, as has the entire look of the room – the designer is still the versatile Khuan Chew of KCA, who is also the Burj Al Arab room mastermind. 510 has access to Mina A’Salam’s superb second floor club lounge, where you can sit on the big terrace looking down at boats on the canal, and then the beach, and the blue sea. 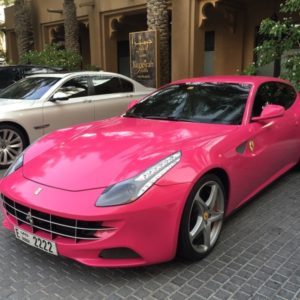 Cars outside the outsize gym

Like much of Dubai, however, this is a luxury hotel that is full of surprises. I head for the mammoth gym, with Olympic-sized inside pool, all shared with the entire Madinat Jumeirah complex. On my way I pass the usual gleaming white Rolls-Royces, Cayennes and Range Rovers that are almost the norm in the UAE, but suddenly I see a fuchsia Ferrari that is more usually the type of car that Emiratis keep overseas, for exclusive use when they are, say, in London’s Knightsbridge area. There is noticeably less outward show among locals in the UAE these days. I continue to the gym, sorry there is no time for the spa. I will have to come back to this luxury hotel.

Meanwhile, see the panorama below, taken from Pierchic restaurant.